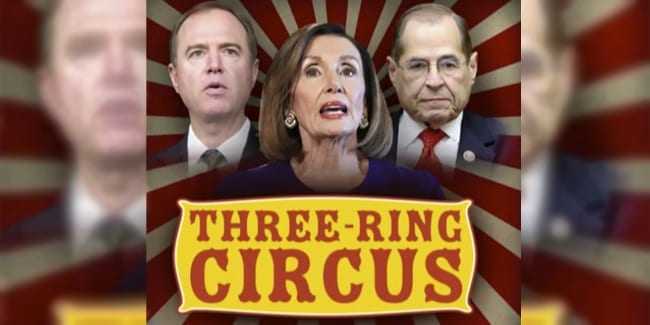 The Democrats and their partners in the media are undoubtedly going to claim that the hearsay testimony of career diplomats, Bill Taylor and George Kent, was damning to the President. This is a lie.

These are the same exact people who for years sold the lies of the Russia Hoax which led to the Witch Hunt of a duly elected President. If the Democrats and the media were honest about day one of the public impeachment testimony, they would cancel all further testimonies as it is evident that this entire spectacle is a sham.

There were eight key moments from today’s testimony that need to be highlighted:

1. Cross-examination is often referred to as “the engine of truth.”  Yesterday showed why. Leading questions by Jordan, Radcliffe, and Turner on cross-examination eviscerated the witnesses as nothing more than a chattering class of diplomats peddling hearsay, opinions, and conjecture.  This is impeachment by rumor and innuendo.

Rep. Adam Schiff earned the “liar, liar, pants on fire” award for claiming that “I don’t know the identity of the whistleblower.”  Right.  And pigs fly.

2. Rep. Mike Turner won the “quote of the day” when he correctly observed that “We are not in a court…and if we were, the 6th Amendment would apply and so would rules on hearsay and opinion and most of your two testimonies would not be admissible whatsoever.”

3. Rep. Mike Quigley won the “obtuse award” for absurdly claiming that “hearsay can be much better evidence than direct evidence.”  Lawyers across America must have been howling with laughter. Direct evidence is, by definition and practice, far superior to hearsay, which is inherently suspect. While it’s true there are exceptions to the “hearsay rule”, they do not apply to multiple hearsay.  Both these witnesses relied on exponential hearsay. Single hearsay is unreliable, double hearsay is a joke, triple hearsay is a farce. These witnesses surmised things based on quadruple hearsay, which is utterly ludicrous.

4. Rep. Adam Schiff earned the “liar, liar, pants on fire” award for claiming that “I don’t know the identity of the whistleblower.”  Right.  And pigs fly.

5. Republicans successfully underscored the only relevant and material evidence —the conversation between Presidents Trump and Zelensky on July 25th. Nowhere in the call is there evidence of pressure, demands, threats, conditions or the ever-elusive “quid pro quo.”  This was corroborated by Zelensky himself.

6. It is a true and unassailable fact that military aid was given to Ukraine, and no investigation of the Bidens was undertaken.  So much for the highly touted “quid pro quo.” It never happened. Period.

7. It is equally true that Zelensky and Ukraine did not even know of the temporary freeze on funds, until almost 5 weeks after the telephone call.  This was confirmed by Zelensky and the Ukraine government. It is legally impossible for there to be a “quid pro quo” if the recipient of the “quid” is oblivious to the “quo”.

8. Bottom line: yesterday’s testimony established no bribery, no extortion, and no crime of any kind. An impeachable offense remains an Adam Schiff fantasy.

In this article:Adam Schiff, impeachment, Ukraine