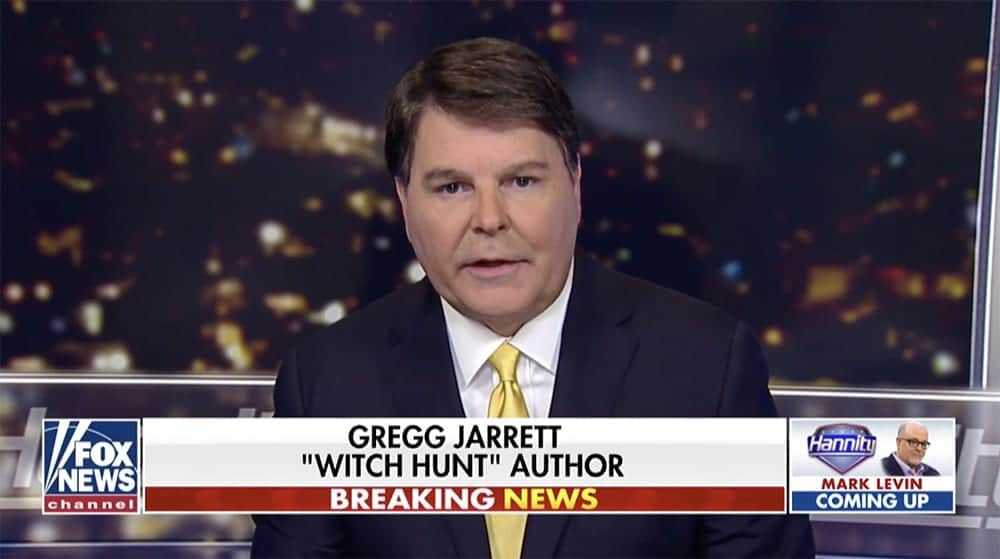 Gregg Jarrett filled in for Sean Hannity on his nationally syndicated radio show and had a powerful opening monologue which served as a warning for the 2020 election year.

You must remember who the group of people are that lied to America for over two and a half years, and why they continued to tell lies when the truth was already known.

It’s a new year, a new decade… and a new presidential election. To the chagrin of the Trump-hating media and their rapacious & vengeful co-conspirators (Nancy Pelosi, Chucky Schumer, Jerry Nadler and the chronically dishonest Adam Schiff… not to mention the gaggle of Democrat presidential candidates bereft of any good ideas that can compete with Trump’s economic record), the President is poised to be re-elected to another 4 year term. People tend to vote with their wallets. If things are going well for them financially, they endorse the status quo and reject change that runs the risk of reversing their gains and well-being. As we begin 2020, the stock market continues to hit all-time highs. Your 401-k and investments are probably better than ever before. Consumer confidence has hit a 20 year high. Unemployment is at a 50 year low. Poverty is down substantially. Wages continue to rise. GDP and consumer spending are strong. Trump deserves credit for much of this. He rolled back onerous and expensive regulations that were choking businesses. He cut taxes that boosted not just the American workforce but incentivized employers to invest and expand. Democrats want to reverse course and raise taxes, reinstate regulations, and undertake trillion dollar ideas (like the green new deal and Medicare-for-all) that would bankrupt the federal government and lead inexorably to recession. Americans are smarter than that. And this bodes well for President Trump’s re-election. It bodes poorly for democrats and the complicit media. Come November, Rachael Maddow’s head will explode. And that, I don’t want to miss.

Here’s a refresher course. Maddow spent much of Trump’s first term claiming that he was a Manchurian candidate –Putin’s puppet who was acting as a covert Kremlin asset. More than anyone else, Maddow advanced the Trump-Russia “collusion” hoax… assuring her lap-dog (and unthinking) viewers that the President would be tossed out of office once the Mueller Report was made public. She promised that the Clinton funded anti-Trump “dossier” was absolutely true… relying on useful idiots like James Clapper, Obama’s director of national intelligence, as her source.

For example, in her monologue on August 23, 2017, Maddow stated with unreserved certainty that –quote—“nothing in the dossier has been overtly disproved since it was first posted online.” Right. Except that all of the main allegations against Trump had been overtly disproved –by the FBI. Months earlier, they’d tracked down Christopher Steele’s primary information source… who, according to the recent I-G report, admitted it was a collection of embellishments and lies, cobbled together from hearsay built on hearsay. Some of it was said in jest over beers.

But the conspicuous absence of real evidence did not stop the malevolent Maddow from peddling her phantasm. Night after night, she promised her brainless sycophants that they’d be rewarded by the special counsel, Robert Mueller –Trump would be cuffed and frog-marched out of the White House, thanks to the “dossier” that she treated as “the gospel according to Rachel”. Here’s another example: On July 2, 2018, in another obtuse monologue, she informed her viewers that –quote—“nothing in the dossier has ever been disproven despite all the political controversy around it.” Except, that wasn’t even close to being true. That same month, I published my book, The Russia Hoax, disproving the main accusations in the phony “dossier.” And I wasn’t alone. Sedulous reporting by John Solomon and the tenacity of Sean Hannity day after day on this radio show and on his nightly TV show demonstrated that the “dossier” was demonstrably false. There was no evidence of a criminal collusion conspiracy with Moscow… and the Mueller Report would so conclude. And, of course, when it was released in April of this year that’s exactly what happened.

Did a contrite Maddow apologize for misleading her audience with reckless reporting and analysis? Of course not. Was she fired from MSNBC? No way. There were too many others at the network who had embraced her fraud. NBC’s Chuck Todd, for example, on “Meet The Press” had willingly bought into the hoax. On April 15, 2018… he stated –quote—“So far with this dossier, nothing yet has been proven untrue.” Nice job, Chuck. You’ve now earned a coveted membership in the “Flat Earth Society.” It’s not just the dopes at MSNBC and NBC. The folks over at CNN adopted the dossier as scripture. Jim Sciutto said on air –quote—“The dossier, in fact, is far from bogus.” Another CNN contributor said, “Increasingly, it’s the accurate dossier. Increasingly, it’s the damning dossier.” Except, the only thing that was damning was the stupidity of CNN.

People like Rachael Maddow have no conscience, no ability to admit fault or failure. She expressed not a shred of regret or remorse for lying to her viewers. Media critic Erik Wemple of the Washington Post recently condemned Maddow as a charlatan. He wrote that she “rooted for the Steele dossier to be true.” And when it fell apart, she turned her attention to something else. Then, when confronted in a podcast, she pretended that she’d never deceived her viewers by asserting the validity of the dossier. She called it “creepy” to suggest otherwise. She actually said this: “it’s not like I’ve been making the case for the accuracy of the Steele dossier and that’s been the basis of my Russia reporting. That’s just not true.” Think about that. In the history of lies, can you come up with a bigger whopper? Maddow was just one symptom in the larger disease of media malpractice on steroids. And they were rewarded for it! The Washington Post and the New York Times actually won the 2018 Pulitzer Prize for their reporting on the dossier and Trump’s collusion with Russia. Except that the dossier was a fabrication… and collusion with Russia never happened. The people who got it right were mocked, ridiculed and demeaned. The people who got it wrong were awarded Pulitzers. In what upside down world does that happen? I’ll tell you. It’s the world of liberal dominated journalism. They never admit their mistakes –even egregious ones. Instead, prizes are awarded only to leftist reporters who managed to demolish truth, fairness, and accuracy. And then they move on. Rachael Maddow is like a cult leader whose end-of-world prediction failed to come true. She just picked a new date and prophecy.

Print 🖨 PDF 📄
In this article: