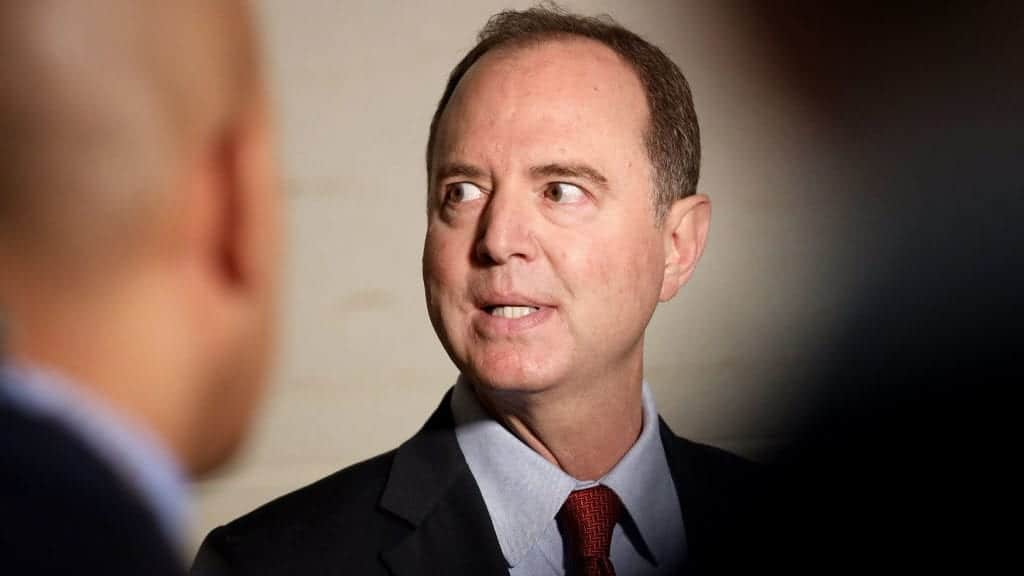 The most recent indictment by Special Counsel John Durham has fully exposed the notorious Steele dossier as nothing more than a collection of lies designed to drive the phony narrative that former President Donald Trump colluded with Russia.

But beyond Hillary Clinton and her cronies who invented and disseminated the hoax, there were plenty of other remorseless liars who contributed to the fiction.

The most flagrant huckster of hysteria was Rep. Adam Schiff, the highest-ranking Democrat on the House Intelligence Committee. He was instrumental in fueling the feeding frenzy over the dossier fabricated by ex-British spy, Christopher Steele. Schiff promoted it and defended it in hundreds of televised appearances.

Incredibly, he is still at it. Appearing this week on “The View,” the congressman was confronted by guest co-host Morgan Ortagus who offered him the chance to come clean by admitting he was culpable for spreading a big lie and devising a few whoppers of his own.

Instead of a sincere mea culpa, Schiff bobbed and weaved as Ortagus skillfully pressed him with direct questions that could only be answered with the unadorned truth. Sadly, truth is meaningless to a guy like Schiff, who was torched afterwards by journalist Glenn Greenwald as an “amoral sociopath.”

In the interview, Schiff awkwardly dodged the fact that he had spent three long years spreading lies and misleading the American public by relentlessly vouching for the dossier. At one point, he was so confident of its veracity that he read it verbatim into the congressional record.

Look at what an amoral sociopath Adam Schiff is. He spent years promoting the Steele Dossier. He read it into the Congressional Record. He lied about the "smoking gun" evidence he saw (that Mueller never found). Watch how he worms his way around to avoid even an iota of mea culpa https://t.co/3C1V6dYhnc

When Ortagus accused him of spreading destructive disinformation for years, Schiff answered by saying that he “couldn’t have known” if people were lying to Steele. But that’s not remotely true. Lots of people knew that the dossier was a pack of lies, myself included. All you had to do was read it. It was poorly written and laughable on its face.

The FBI discredited Steele’s dossier within months of its composition. The bureau fired him as a confidential source for lying. Schiff’s own intelligence committee conducted an exhaustive investigation led by then-chairman Rep. Devin Nunes, and found no evidence of collusion. The dossier was noxious junk.

Yet, Schiff continued to frequently claim that he had corroborated its contents. He declared publicly that he had “smoking gun” documents and had personally “seen ample evidence of collusion in plain sight.” He never did, of course, because that purported evidence never existed. Schiff just made it all up.

As Ortagus persisted, Schiff grew noticeably uncomfortable. He tried to change subjects and shift attention to Trump. Out of nowhere, he brought up the “January 6th insurrection,” except he called it an “erection” before correcting himself.

One of the main reasons the hoax worked so well for so long is that people like Schiff were willing to misrepresent the (lack of) proof they claimed to be holding in secret. News outlets like CNN and MSNBC invited the congressman to go on air and promise, week after week, that we were just on the edge of a big reveal, of a scandal too horrible to even detail.

Journalists allowed themselves to be played for fools by a con artist extraordinaire. Reporters became Schiff’s witting dupes, never bothering to challenge him or attempting to verify his sensational claims with something called credible evidence.

Schiff got away with his deceit by hiding behind the supposedly “classified” nature of the evidence he claimed to have seen. “I can’t go into the particulars, but there is more than circumstantial evidence now,” he said on NBC’s Meet the Press. There was little pushback.

He consistently trumpeted that he had personally examined incontrovertible evidence of collusion, but he failed to produce any of it. He told ABC News that the illicit Trump-Russia conspiracy was of “a size and scope probably beyond Watergate.”

You could fill pages with Schiff’s venomous canards, which I did in my book “Witch Hunt: The Story of the Greatest Mass Delusion in American Political History.” One of the most shameful episodes occurred when he questioned former Trump campaign adviser, Carter Page, during a congressional hearing, which he managed to transform into a theater of the absurd.

Armed with no evidence whatsoever except the dossier that he read aloud, Schiff portrayed Page as a Kremlin spy. The evidence cited? A courteous handshake during a chance encounter that lasted less than ten seconds. The congressman proclaimed that it was proof positive of an agreement to steal the presidency. Ridiculous? Sure.

In one lengthy harangue, Schiff contended that Page (an unpaid, junior volunteer who never even met the candidate nor spoke with him) had been offered the equivalent of an $11 billion bribe by the Russians to unduly influence Trump in the event that he won the 2016 election. It was another extravagant dossier fable. Page sat there flabbergasted that anyone, much less a US congressman, would even consider such drivel. But it was classic Schiff.

When finally afforded a chance to respond during the hearing, Page denounced the dossier as “totally preposterous.” It most certainly was. Covert meetings described in the document never happened. He insisted that he did not discuss the Trump campaign with any Russians and had never colluded with them, as the dossier wrongfully asserted.

Schiff was undeterred. He was convinced that he had cornered the hobgoblin of a grand conspiracy. But his only evidence was the dossier itself, which was no evidence at all.

The Mueller report later exonerated Page confirming that none of the damning accusations against him—and cited by Schiff—were true. Not surprisingly, the congressman has never had the decency to apologize to Page for his unconscionable smears.

Instead, he continued to propagate the lies despite declassified documents showing that he knew all along that there was no plausible evidence of a collusion conspiracy.

Now, revealed as a thoroughly disreputable fraud, Schiff refuses to accept responsibility for nourishing the wild accounts of treasonous acts that never occurred.

The Editorial board of the Boston Herald best described the damage that Adam Schiff’s dishonesty has caused when it wrote, “The effect was to frighten and alarm millions of Americans, sowing division between neighbors, toxifying our discourse and raising anxieties.”

That is the disgraceful legacy of Adam Schiff.