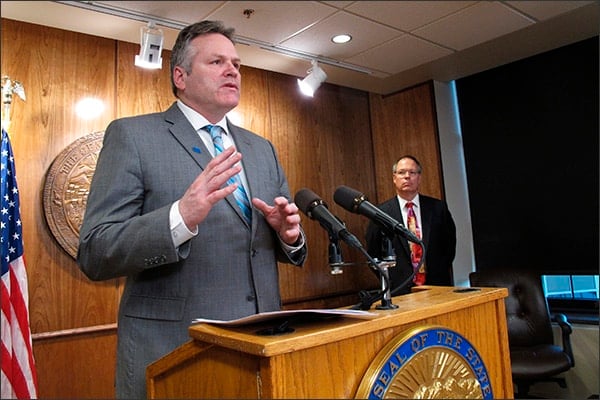 “They pay lip service when it suits their political aims, but when it comes down to helping these folks, it’s a poor record at best and dismal at its worst.” Those are the pointed words being used by Republican Governor Mike Dunleavy of Alaska to describe the Biden administration’s treatment of Native American land.

Therefore, Dunleavy is suing the Biden administration in order to address the behavior of the federal government, having transferred contaminated lands to Alaska Natives.

The Daily Caller reports Dunleavy filed the complaint in Alaska’s United States District Court “to compel the Department of the Interior (DOI) to take responsibility for hundreds of contaminated areas that the federal government transferred to Alaska Natives.”

“To this day, the federal government does not appear to want to take responsibility,” said Dunleavy of the contaminated Alaskan land that has gone unaddressed by the government since 1971, when the lands were given to native villages and regional corporations, according to the court filings.

As for the Biden administration specifically, DCNF writes that they “attempted to absolve itself of the issue in a letter sent on April 8, 2022, according to a July press release.” Additionally, “if the federal government continues to deny responsibility, the state may consider filing lawsuits on individual sites, according to documents.”

Hallie Bisset, executive director of the Alaska Native Village Corporation Association told DCNF “some sites are within two miles of a village and we know they’re contaminating our drinking water and food sources.”

Specifics in the lawsuit allege that the Alaska Native community has expressed numerous concerns over health safety and economic issues multiple times relating to the presence of hazardous materials.

“Over 920 contaminated sites were originally given to Alaska Natives and some of these sites may have contained high levels of hazardous waste like asbestos, explosives, mercury as well as polychlorinated biphenyl (PCBs), according to a 1998 BLM report.”

In this article:Alaska, featured, Mike Dunleavy