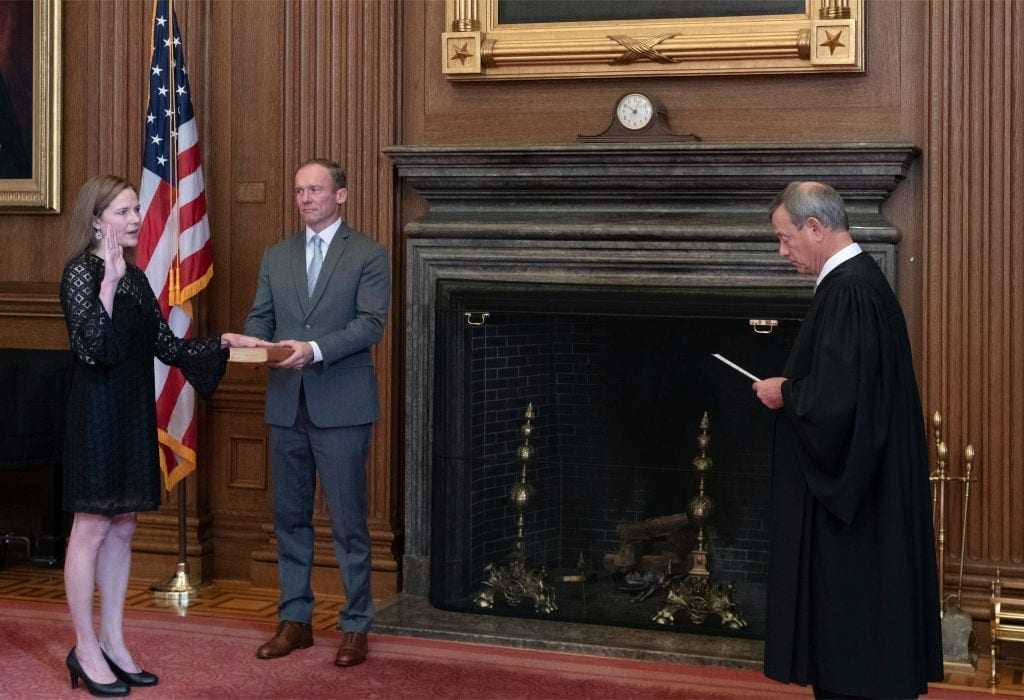 Less than 24 hours after her confirmation to the United States Supreme Court, Justice Amy Coney Barrett is being asked to recuse herself from a case.

Liberals are even calling for her impeachment.

They sure don’t waste any time.

Barrett will begin hearing oral arguments next week after being sworn in during a private ceremony at the Supreme Court on Tuesday. As expected, her confirmation was met with explosive reactions from the left, including threats to pack the court.

Critics of President Trump have even begun the impeachment narrative against his Supreme Court pick should she not recuse herself from a Pennsylvania election case, according to BizPacReview.

The Luzerne County Board of Elections filed a recusal motion Tuesday over a Pennsylvania case involving an extension for mail-in ballots.

“The nomination and confirmation of a supreme Court justice this close to a presidential election is unprecedented,” they wrote. “As concerning as that is, what is even more troubling is the language President Trump has used in consideration of this nomination, linking it directly to the electoral season at hand, with implications for his own re-election.”

This case comes amidst growing concern over mail-in-ballot fraud. As the coronavirus continues to sweep through the country, more Americans are turning to voting by mail in efforts to avoid over-crowded polling places where the virus may be spread. But, once the ballot leaves the voters hand, the possibilities for fraud are endless.

During her confirmation hearings, Barrett refused to answer on whether she would recuse herself from election-related disputes, sending liberals off the deep end.

In an opinion piece published in the Independent, PBS host Alexander Heffner suggested that if Barrett does not recuse herself “from decisions that would clearly amount to a quid pro quo for Trump’s re-election,” her “rank duplicity will be unmistakable.”

He continued to suggest that, in that case, Democrats could then “swiftly impeach” Barrett.

If Barrett rules against the rights of voters in these days leading up to or during vote-counting — refusing to recuse herself from decisions that amount to a quid pro quo for Trump’s re-election — Dems need to impeach. (2)

“It is on this basis that a potential Biden presidency and Democratic Senate will have leverage to add a Justice – a tenth Justice – to begin the process of balancing the Supreme Court. It would be politically palatable if Barrett’s appointment had enabled a plot to destroy the legitimacy of the election,” Heffner wrote.

But Heffner does not stand alone.

“If Amy Coney Barrett goes on the Court and immediately votes for PA voter suppression, she should be quickly impeached,” Ornstein said. “Trump asked her openly to act to tilt the scales of the election.”

I repeat:If Barrett, acceding to a partisan swearing in at the White House, knowing that Trump explicitly said he nominated her to sway the election, does not recuse, it is an overt quid pro quo. The House should impeach her to leave an irrevocable stain on a dishonorable justice

Democrats have made it clear that they will threaten whatever it takes to prevent the Supreme Court from tilting to the right – packing the court, taking away lifetime tenure, even impeachment.