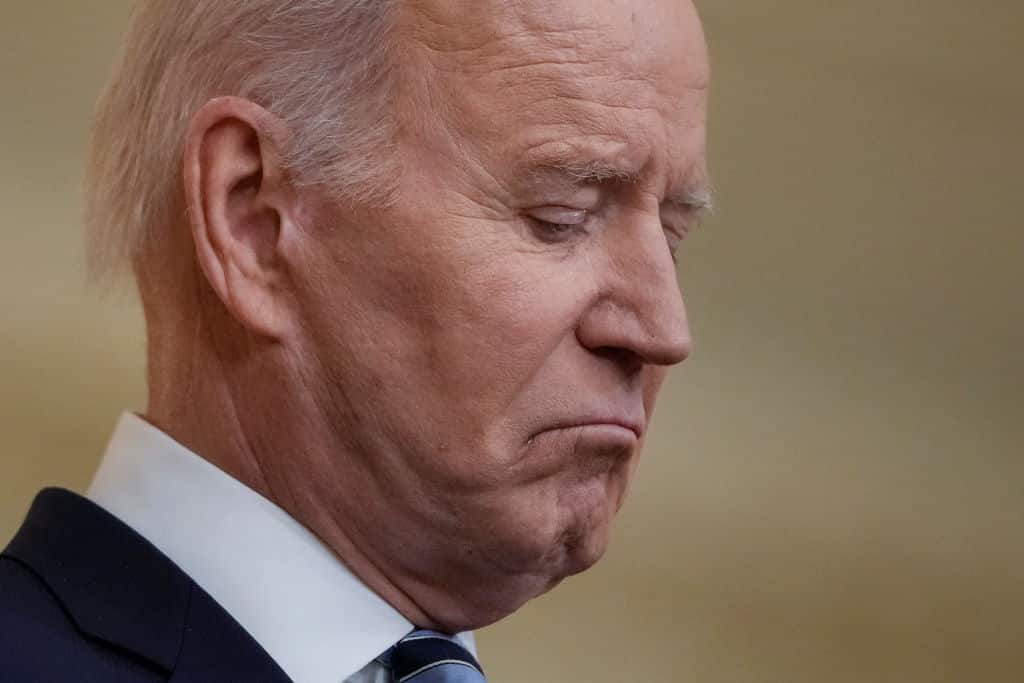 As Americans struggle under suffocating inflation, economic recession, rampant crime, and chaos at the border, Democrats blindly obsess over climate change, racial equity, voting rights, and abortion.  In matters of importance and urgency, the party in control is tone deaf.  It is precisely why they are expected to lose control of the House in congress.  An electoral backlash awaits them.  It’s a reckoning Democrats richly deserve.

As president, Joe Biden has led his party down a self-destructive path of political immolation…where defeat at the ballot box is the inevitable result.  Take a look at any of the polling data.  They’re all the same.  In a recent ABC News/Washington Post poll, voters aligned themselves with the Republican agenda by a significant majority.  61% say they care most about the economy, inflation, and crime —the top GOP issues.  A scant 35% back the Democrat agenda of abortion and climate change.

A Monmouth University poll did a singular issue comparison.  82% of Americans ranked inflation as the most important issue, but gave Biden an abysmal 30% approval over his handling of it.  72% rank crime as a priority, but delivered the president a 32% score on that.  Immigration is important to 67%, but Biden gets a 31% mark.  Even on abortion, Joe grades poorly at 31%.  Across the board, Biden’s report card is an unqualified “F.”

These numbers reflect common sense.  Nearly two-thirds of Americans live paycheck to paycheck.  They have no savings, nothing to fall back on.  They are unable to weather severe financial storms like the staggering inflation that was triggered, in large part, by Biden’s profligate spending and his dismantling of U.S. energy independence that once made gasoline costs affordable.  Consumer prices for everything are through the roof.  Buying groceries to sustain your family can land you in the figurative poor house.

Immediacy always dictates voting patterns.  This is especially true during a recession when citizens necessarily vote their empty wallets.  That’s what they’ll worrying about when they step into the booth on election day.  A majority of Americans fret about putting food on the table and buying a few gallons of exorbitantly priced gas so they can get to work.  After doling out rent, their utility bills often go unpaid, and they rack up debt.  Try as they may, they cannot make ends meet.

The pain they endure will influence their votes.  How could it not?  The party in power gets the blame, as it should.  After all, they caused it.

Biden and Democrats not only wrecked a thriving economy, but they’ve utterly ignored spiraling crime that now terrorizes major cities across the country.  They’ve done nothing about it.  To the contrary, their liberal policies have only incentivized criminality while disregarding the innocent victims of crime.  They championed “Defund The Police” and demonized cops.  Their cashless bail and soft on crime programs allowed criminals to beat, shoot, slash, steal, and murder their way through communities where residents now live in fear in the equivalent of a war zone.  It’s no wonder that Americans are angry.  At the same time, Democrats want to make it harder for people to defend themselves.

But that’s not all.  The Democrats’ open borders policy has allowed entry to more than 4 million illegal immigrants since Biden took office.  There’s no infrastructure in place to absorb them.  There are not enough jobs and budget dollars to support them.  Taxpayers are stuck with a staggering net cost of $116 billion a year because of the medical, educational, and welfare burden of illegals.  The fiscal load causes taxes to go up among law-abiding citizens who are already over-taxed.  Yet, Vice President Kamala Harris keeps insisting the border is secure.  What border is she talking about?  Biden won’t even bother to visit.  Out of sight is out of mind, I suppose.

The upcoming mid-term elections is an overdue referendum on the miserable status quo.  But it should also serve as a stinging rebuke to Joe Biden’s woke policies and failed presidency.  It may not be the Giant Red Wave that Republicans envision, but it will be a substantial thumping in the House of Representatives, marking the end of Nancy Pelosi’s reckless reign of progressive terror as Speaker.  Good riddance.  Time to take out the rubbish.

Republican victory may finally open the door to some semblance of responsible governance and send feckless Joe to the ash heap of presidential irrelevance.  Two months ago, Biden’s approval rating reached its lowest level for any president in modern history —38 %, according to Gallup.  It has ticked upward since then, but not by much.

A more revealing poll by the Associated Press shows that 85% of Americans believe the country is on the wrong track.  That includes 78% of Democrats.  When members of the party in power admit that things suck, you can be assured that wholesale change is around the corner.  The number one issue is the economy, and almost 80% describe it as poor.

If you dig deeper into the polling data…you’ll find that Blacks and Hispanics are abandoning the Democrat Party in droves.  Why?  Because they are the disproportionate victims of rising crime and soaring inflation.  They know who’s in charge and they know whom to blame.  That’s just one of the reasons why Republicans have now opened up a solid 5 point lead in the generic congressional ballot among likely voters in the ABC poll.

State-wide U.S. Senate races are closer and the outcome there is uncertain.  But the opposite is taking shape in the smaller House districts where Republicans seemed well positioned to regain control.  But it’s not just the crushing economy that spells trouble for Democrats come November.  It is the profound unpopularity of Joe Biden personally that is an anvil around the neck of his party.

Biden’s stewardship is a model of incompetence.  From his bungling of the U.S. surrender to the Taliban in Afghanistan…to his dreadful handling of the border crisis…to his indifference to spiraling crime…to his mismanagement of the economy and inflation, Biden has reinforced the widespread belief that he is a lousy president.

The image of a mentally alert commander in chief has taken a beating by Biden’s endless gaffes and head-scratching stumbles that depict an aging president afflicted with cognitive deficits and growing dementia.  He looks weak and acts weak, which is a dangerous combination in any leader.  Enemy states know it and will seek to exploit it.  Every day that Biden is in office, he puts the welfare of America at risk.

Columnist Miranda Devine of the New York Post put it this way:

“Whether he is falling up the stairs of Air Force One or falling off a stationary bike, whether he is wandering around on stage in a fog or clutching cheat sheets designed for a 4-year-old, whether he is shouting incoherently or whispering creepily, the optics are shocking.”

Last week’s blunder was among the most embarrassing yet.  At a conference, he searched in vain for Congresswoman Jackie Walorski, who was tragically killed in a recent auto accident.  “Jackie, are you here?  Where’s Jackie?”  The room was aghast as he looked around, finally saying, “I think she wasn’t going to be here.”

No kidding.  She’s dead.  Biden knew she was deceased.  He sent her family a long condolence letter and was scheduled to meet with her loved ones.  The conference where he spoke was partially in honor of her memory.  How does a person forget something like that?  You don’t, unless you’re suffering from some form of debilitating senility.

Even the Biden-friendly White House press corp was horrified and refused to coverup the president’s mortifying lapse.  The more press secretary Karine Jean-Pierre tried to dismiss it with an utterly lame excuse, the worse it got.  Reporters weren’t buying it, and her vapid explanations were met with universal derision.

There is no mistaking the likely cause of Biden’s alarming confusion because it has become sadly chronic.  It is something every American should be deeply concerned about.  And it is one of the principal reasons why the electorate has lost faith in the president.  Like a puppet controlled by others, he does not seem to be in charge of anything.  Without a teleprompter, he struggles to put a subject with a predicate.  He garbles thoughts and mumbles phrases that are unintelligible.  He’s out to lunch.  Permanently.

Biden’s diminished mental state suggests that he is susceptible to manipulation.  That may explain how the progressive wing of his party was able to commandeer his presidency to shove him far to the left of the moderate positions he promised during the campaign.

It may also account for his unhinged attacks on Republican voters, calling them semi-fascists (whatever that means), white supremacists, a threat to democracy, and a clear and present danger to the republic.  After vowing to unite the country, Biden is sowing only division and hatred.  Does he even understand what he’s saying?  Who exactly is writing the garbage he’s reading in the prompter?

It is easy to dismiss Biden as a mentally challenged geriatric who blathers incoherently and is prone to wildly dishonest rhetoric.  But he’s not just some crazy uncle in the attic.  He’s President of the United States and leader of the free world.  He has immense power.  That power can be used for good or misused for bad.

Progressives have seized control of the Oval Office.  Who are they?  They’re radical socialists in disguise.  They hurl accusations of bigotry and racism without evidence or thought.  Their weapons of choice are public intimidation and shaming.  They operate what one Wall Street Journal columnist called “a faux-moral movement” that is “social justice obsessed.”  They wage cancel culture wars and a relentless campaign of virtue-signaling, intolerance, gender ideology, and extreme political correctness.

The woke crowd is convinced that buying a Tesla will cure all ills.  But they are out of touch and tone deaf to what afflicts most Americans —the inability to afford groceries, gasoline or pay their rent and heating bills that have skyrocketed amid Biden’s corrosive energy policies and insane economic agenda.  Those same Americans are sick of the racially divisive bombast being served up.

VP Harris declared that government hurricane relief must be based on the color of your skin.  That, of course, is illegal.  Not that Harris would know.  She flunked the bar exam.  Which is only slightly better than getting kicked out of law school for cheating, as her boss did.

Not to be outdone when it comes to racial pandering, Biden plans to “end hunger” through the power of diversity, equity and inclusion.  Sorry, Joe…but your magic formula won’t put food in the stomachs of hungry people.  Try lowering the cost of everything by embracing sound economics.  Reduce taxes instead of raising them.  Allow Americans to reap the benefits of their own success.  Stop penalizing them.  And while you’re at it, stop jamming socialist nonsense down their throats.  End dependency by eliminating the cradle to grave welfare state.  It’s destructive, not constructive.

Ronald Reagan put it best when he said, “Government is not the solution to our problem, government is the problem.”  He was right.  It’s too big and bloated and powerful.  Unelected bureaucrats regulate every aspect of our lives.  An elite few tell us what to do and how to do it.  It’s high time that government get out of the way.  Stop imposing dictates and onerous demands.  Return the power to the people.  Let them direct their own course with freedom of choice.

Biden and Democrats have made a mess of things.  It has to change or we are doomed.  And in a representative democracy, change can only come at the ballot box.  We will see in just a few weeks whether Americans are angry enough and desperate enough to exercise their constitutional right to change course.  It is now a matter of survival.