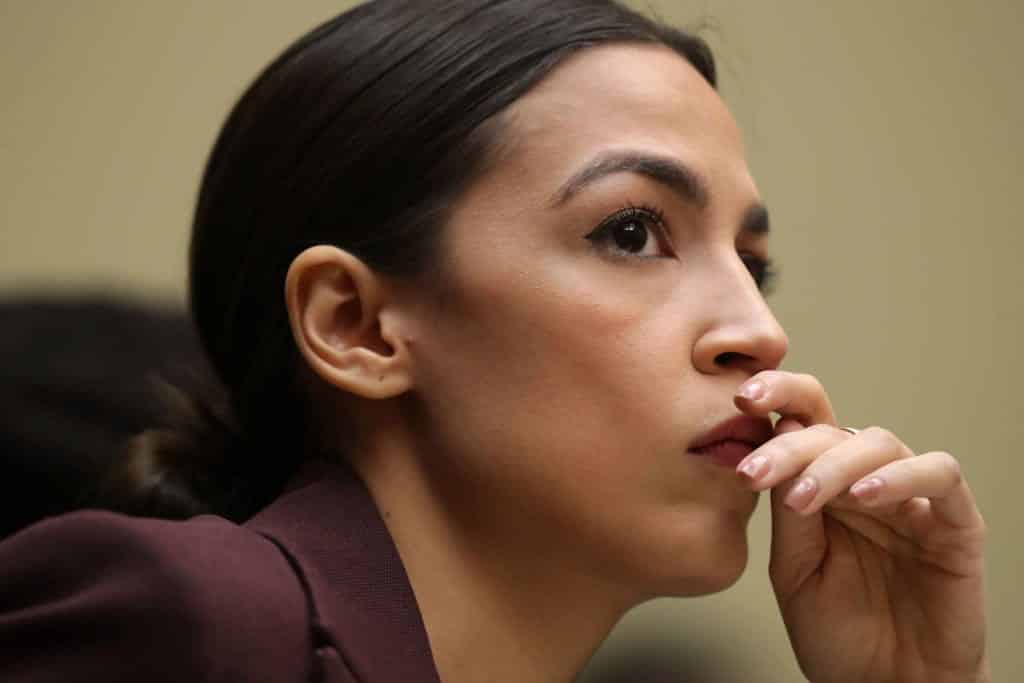 Alexandria Ocasio-Cortez is facing heat on Twitter, including a number 1 trending hashtag, after claiming that she was near death during the January 6 Capitol riot.

But, AOC, if you can’t stand the heat, get out of the kitchen.

The controversy exploded last month when she accused Sen. Ted Cruz (R-Texas) of helping incite the attack on the Capitol and trying to have her killed.

Then, in a video posted earlier this week, she claimed that, as rioters approached and breached her office, she was told by a staffer to “hide, hide, run and hide.”

“I thought I was going to die. I have never been quieter in my entire life,” she explained in the video, adding that she hid in a bathroom.”

She also said a man broke into her office screaming “where is she?”

She later explained that the man was actually a Capitol Police officer who appeared angry and hostile towards her.

She said that the situation “didn’t feel right because he was looking at me with a tremendous amount of anger and hostility — and things weren’t adding up. There was no partner there and no one was yelling, he wasn’t yelling like, ‘this is Capitol Police, this is Capitol Police,'” according to Fox News.

Another interesting note: in one video, AOC claims she was not at the secure extraction location because she was scared of other members of Congress.

In a video a few weeks later, she changed her story, saying she was never given information regarding the secure location.

“Did he not say that he was Capitol Police on purpose? Did he lose himself in that moment? Did he not give us the extraction point location because he forgot? Or was he trying to actually put us in a vulnerable situation?”

It seems like someone needs to get their story straight.

Following the riot, her fable was completely sensationalized by the mainstream media.

One story from Newsweek claimed “rioters actually entered her office, forcing her to take refuge inside her bathroom,” BizPacReview reports.

Rep. Nancy Mace (R-S.C) pointed out that AOC’s office is two doors down from her in the Cannon House Office Building, and that no one breached the area.

“AOC made clear she didn’t know who was at her door. Breathless attempts by media to fan fictitious news flames are dangerous. My office is 2 doors down. Insurrectionists never stormed our hallway. Egregious doesn’t even begin to cover it. Is there nothing MSM won’t politicize?,” she wrote in a Tweet.

.@AOC made clear she didn’t know who was at her door. Breathless attempts by media to fan fictitious news flames are dangerous.

My office is 2 doors down. Insurrectionists never stormed our hallway. Egregious doesn’t even begin to cover it. Is there nothing MSM won’t politicize? pic.twitter.com/Tl1GiPSOft

Critics have challenged AOC’s claim that she feared for her life because of the riots, as she seemed to suggest she was in or near the Capitol building at the time of the attack.

“I did not know if I was going to make it to the end of that day alive,” she said.

On Wednesday, the hashtag #AlexandriaOcasioSmollet soared to #1 trending on Twitter, an apparent reference to the actor Jussie Smollet, who falsely claimed he was the victim of a hate crime, according to BizPacReview.

This is the latest manipulative take on the right.

They are manipulating the fact that most people don’t know the layout the Capitol complex.

We were all on the Capitol complex – the attack wasn’t just on the dome.

The bombs Trump supporters planted surrounded our offices too. pic.twitter.com/jI18e0XRrd

Many joined in on the fun, pointing out flaws in her story.

A lot of quietly deleted tweets today over the detail in AOC's story that she thought she was hiding from the mob, but it turned out to be Capitol Police. She told it as she experienced it. https://t.co/wlzbpcEuvl

It's ok, you liberals defending AOC.

She took you because you wanted to get took.

It's ok to admit that. Just learn from it.#AlexandriaOcasioSmollett

Someone at Twitter is about to receive an angry phone call from Sandy Ocasio's congressional office in the Cannon House Office Building—which, by the way, is not in the Capitol.#AlexandriaOcasioSmollett pic.twitter.com/BCpRoDLWX2