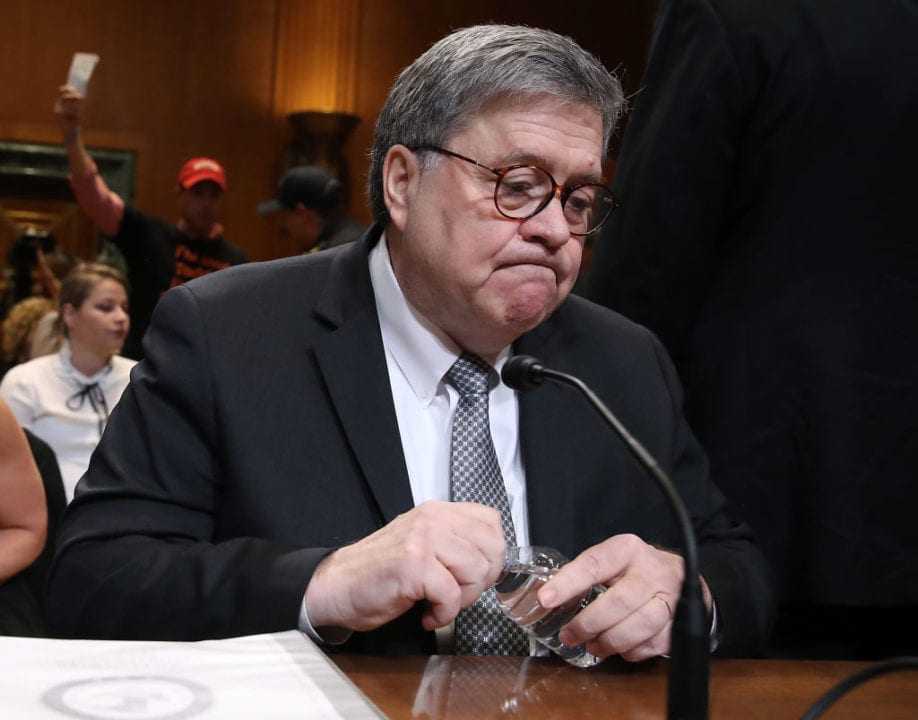 [otw_shortcode_dropcap label=”D” font=”Ultra” background_color_class=”otw-no-background” size=”large” border_color_class=”otw-no-border-color”][/otw_shortcode_dropcap]emocrats and the mainstream media are in the grips of mass hysteria – again. This time, their psychogenic illness was triggered by a presidential tweet. Even Attorney General William Barr seems to have been affected.

Exercising his First Amendment right of free expression, President Trump used his thumbs to tweet late Monday night and state the obvious: it was “horrible and very unfair” for federal prosecutors to seek a seven to nine-year prison sentence for Roger Stone.

Stone – a former Trump confidant – was convicted in November by a jury in Washington of making false statements, obstruction and witness tampering in a case that arose from former Special Counsel Robert Mueller’s Russia investigation.

By any reasonable standard, the sentencing recommendation for Stone was excessive and overly punitive. Stone is 67, has no criminal history, and was convicted of nonviolent offenses. Yet, overzealous prosecutors asked that he serve twice as much time behind bars as those who are found guilty of more serious crimes such as armed robbery, rape, sexual assault, and even negligent manslaughter.

Trump was right when he called the Stone prosecution “a miscarriage of justice.” That is a tweet to which Barr should pay attention.

The moment Trump hit the “send” button on his tweet, collective hysteria swept through the halls of Congress and liberal newsrooms everywhere.

House Intelligence Committee Chairman Adam Schiff, D-Calif., undeterred by his humiliating impeachment defeat just days earlier, was at it again. He accused Trump of an “abuse of power.”

Rep. Eric Swalwell, D-Calif., a chronic impeachment enthusiast, refused to rule out another attempt to remove Trump from office.

Is there something in the drinking water in California that turns the brains of politicians to mush?

The unhinged harangues were all predicated on a brazen assumption that Trump had directed Attorney General Barr to overrule the trial prosecutors and recommend a more appropriate and equitable sentence for Stone of three to four years.

The Justice Department said the decision to seek a lesser sentence for Stone was made Monday when the leadership there first learned what the prosecutors had done – before Trump’s tweet. The president, the White House, the Justice Department, and the attorney general himself all insist that there were no communications about the case. There is no evidence to suggest otherwise.

It appears that the prosecutors who demanded an unduly harsh sentence for Stone misrepresented their intentions to senior officials at the Justice Department. An official there told Fox News that “the sentencing recommendation was not what had been briefed to the Department.”

The Justice Department then moved to correct an injustice. In so doing, Barr became a political punching bag, and the president’s tweet only exacerbated matters.

Sen. Richard Blumenthal, D-Conn., said Barr “ought to be ashamed and embarrassed and resign.”

Sen. Tim Kaine, D-Va., called Barr an “all-purpose flak jacket” for Trump and warned that “this is how democracies die.”

The anti-Trump media piled on by cheering the notion that Stone might die in prison and condemning the attorney general for choosing fairness over vindictiveness.

It is no wonder that Barr, under siege, felt frustrated enough to give an interview to ABC News Thursday in which he complained that the president’s tweets “make it impossible for me to do my job.”

Impossible? No. Difficult? Yes. Importantly, Barr underscored that Trump “has never asked me to do anything in a criminal case.”

While it may be unwise for a president to comment about a criminal case still pending, Trump’s tweet was driven by his own understandable frustration. He sees prosecutors, led by a key member of Mueller’s team of partisans, advocate for a draconian punishment well beyond the norm. Had Stone not been associated with Trump, it is inconceivable that he would have been targeted in such a severe way.

The disparity in treatment of those connected to the president is striking. None of the people who falsely accused Trump of being a Russian agent and who perpetuated their imaginary case of “collusion” with Russia against him have been prosecuted.

The inspector general determined that officials at the FBI and Justice Department deceived the Foreign Intelligence Surveillance Court and obtained illegal warrants without probable cause in order to spy on a Trump campaign associate. So far, no one has been held accountable.

Selective prosecution and unequal application of law is a disgraceful legacy for the Justice Department. Instead of complaining about Trump’s tweets, Attorney General Barr should clean up the shameful mess wrought by his predecessors and rogue prosecutors.

Barr can begin by agreeing with defense attorneys that Stone deserves a new trial. If Barr cares so deeply about the rule of law, as he claims, then he must petition the court to set aside Stone’s convictions based on jury bias and/or misconduct.

As reported by Fox News, there is substantial new evidence that the foreperson of the jury that convicted Stone has a “history of Democratic activism and a string of anti-Trump, left-wing social media posts.”

Before she was ever picked as a juror, Tomeka Hart posted comments about the Stone case and mocked those who argued that his arrest was an example of excessive force. She praised the Mueller investigation and suggested that Trump and his supporters were racists.

Trump was right when he called the Stone prosecution “a miscarriage of justice.” That is a tweet to which Barr should pay attention.

In this article:news2, William Barr