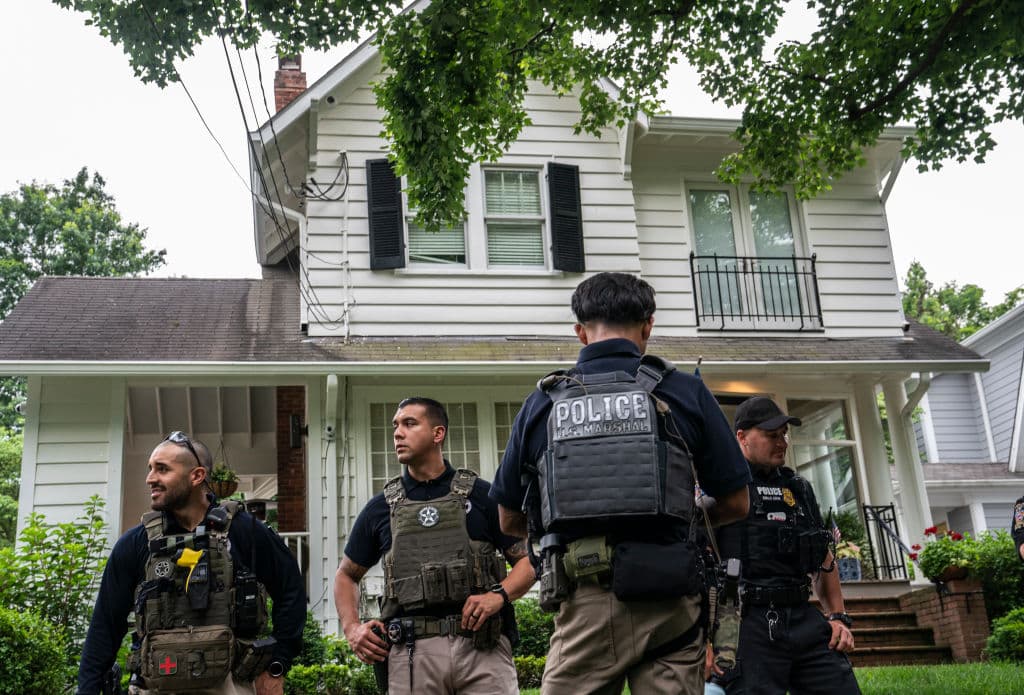 The attempt to murder Supreme Court Justice Brett Kavanaugh at his home is a truly horrific event in American history. But what is equally appalling is the reaction to it.

Our cowardly and incompetent president, Joe Biden, has refused to personally utter a word in public, although he has been given every opportunity to denounce this heinous act.

His attorney general, Merrick Garland, refuses to enforce the law that makes it a felony to protest outside the homes of justices.

House Speaker Nancy Pelosi spent the better part of a week trying to block a bill to enhance vital protection for those who serve on the nation’s highest court…claiming there was “no danger.”

Majority Leader Chuck Schumer offered little remorse for his despicable rant on the steps of the Supreme Court where he hurled threats against Kavanaugh and his colleague, Neil Gorsuch –all but inciting violence against them.  It was entirely foreseeable that a fanatic might be triggered to act.

The New York Times declined to pay much attention to the assassination attempt, burying the story on page 20 of its pathetically biased newspaper.

And the detestable activist group “Ruth Sent Us,” which published online the home locations of the Justices on a map and thereby unleashed a torrent of threats against them, is now specifically targeting Amy Coney Barrett and her seven children by advertising the family’s daily schedule and the schools where her kids attend.

All of this is disgusting and disgraceful. Democrats and their media handmaidens clearly condone the harassment and intimidation of conservative Justices. Their contemptible silence and inaction is the equivalent of encouraging violence.

If Justice Kavanaugh and/or members of his family had been murdered, would they have simply dismissed it as deserved?

Can you imagine the cacophony of condemnation from Democrats and the media if the roles were reversed –if the lives of liberal Justice like Sotomayor or Kagan or Breyer had been jeopardized in an attempted assassination?

The New York Times would blast the story all over its front page with a double-banner headline.  Garland would order the immediate arrest of every demonstrator outside the Justices’ homes and charge them with obstruction of justice under 18 USC 1505.  Biden, Pelosi, and Schumer would raise bloody hell and excoriate it as one of the vilest acts in modern American history.  Any group that doxxed the home addresses would be declared a domestic terrorist organization, shutdown, and prosecuted.

But the man at the top, Joe Biden, is hoping that liberal anger over the anticipated reversal of Roe v. Wade will magically resurrect his failed presidency, turnabout his abysmal ratings, and somehow avert the reckoning that Democrats are facing in the upcoming midterm elections.  This is pure folly teased by hope out of ignorance.
Attorney General Merrick Garland, meanwhile, is a monument to dereliction. He’s more interested in treating concerned parents at school board meetings as terrorists than enforcing the rule of law against obvious lawbreakers. He should be impeached for abdicating his sworn duties and weaponizing the Justice Department for political purposes. By any objective standard, he’s a disgrace.

If the activist nutballs at “Ruth Sent Us” had an ounce of decency, they would apologize profusely for their critical part in ginning up the palpable anger and vulgar protests outside the Justices’ homes, frightening their children inside. The late Ruth Bader Ginsburg would be mortified that her good name has been hijacked for malicious actions directed at her colleagues on the bench.  Were she still alive, she might remind these unhinged zealots how she expressed serious reservations about the reasoning in Roe and how the decision may have exceeded the bounds of constitutionality.

People have a right to protest their government.  That is a given.  It is a cherished right enshrined in the First Amendment.  But it is not an unlimited right.  Under the law, it can be regulated as to time, place, and manner.  To that end, Congress passed a statute that made it illegal to engage in these kinds of protests outside the home of any judge or Justice with the corrupt intent to “influence, obstruct, or impede” a judicial decision.

That is precisely what demonstrators are doing and they admit it. Their stated design is to harass, intimidate and coerce the members of the high court into changing their draft opinion overturning Roe.  This constitutes obstruction of justice.  Unscrupulous Democrats have openly encouraged this ongoing felony. Biden continues to abet and sanction it by his deliberate refusal to repudiate this odious conduct.  Like Garland, the president is duty-bound to uphold and enforce the laws of the land.  Both men have chosen to abandon their responsibilities.

I can think of nothing more repugnant than politicians who employ the threat of violence against vulnerable families to extort a judicial outcome.  It is an atrocious assault on democracy.

In this article:featured, Kavanaugh, SCOTUS