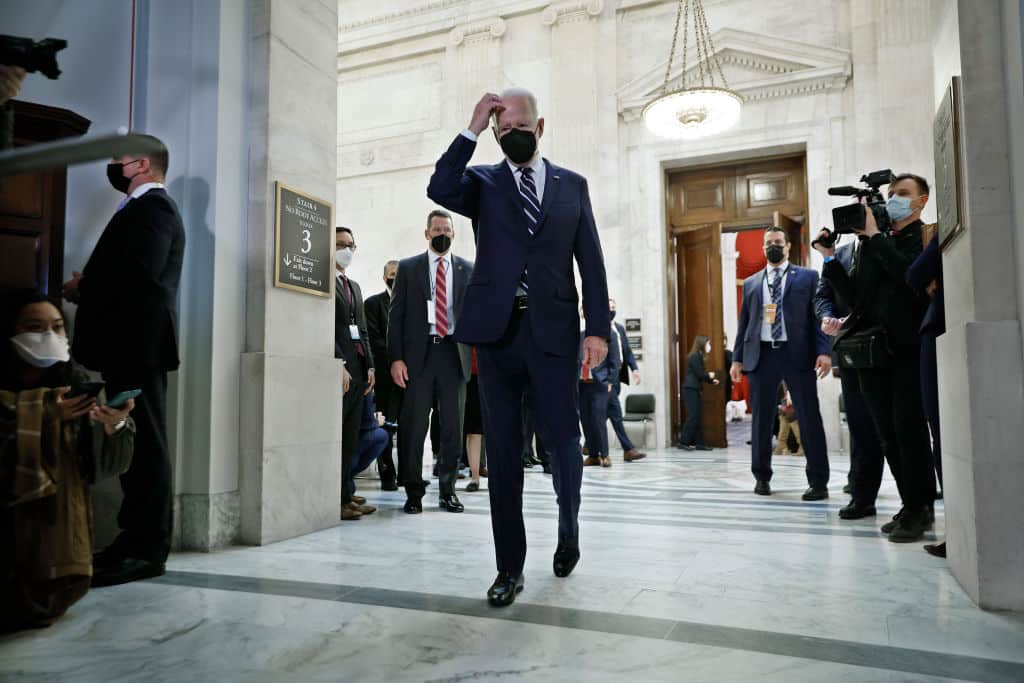 Cowboy Joe has been riding his latest hobbyhorse…and already fallen off with a spectacular face plant in the muck of political rejection.

Biden’s fanciful quest to ram through a federal takeover of voting rules was dead on arrival before the ink was dry.  Passage was entirely dependent on killing the Senate filibuster, which was futile since not all members of his own party were willing to dump the durable rule.  But Joe was either delusional or clueless.  Maybe both.  He surged full steam ahead into a brick wall.  Instead of addressing the very real problems that plague hardworking Americans every day, Biden invested what little political capital he had on something that was destined to fail.

What Biden has never understood is that people care most about what troubles their daily lives.  Currently, it is staggering grocery bills caused by record inflation, empty store shelves, soaring gas prices at the pumps, spiraling energy costs to heat their homes during a frigid winter, and a relentless pandemic that has disrupted every aspect of life.  All of this is obvious to any thinking human being.  But Biden is oblivious to what Americans need and want.  Why?  Likely because he’s resided comfortably off the taxpayer dime his whole adult life.  He has no idea what living and working in the real world is like.

Joe openly admitted that his poll numbers are so atrocious that he doesn’t look at them anymore.  He should.  Maybe it would knock some sense into him.  A new CBS poll shows that a sizable majority of Americans say Biden has not done enough about the economy (62%) and inflation (72%).  Nearly 70% disapprove of his handling of the pandemic.  They complain they’re “disappointed and frustrated” with Joe as their president.  No kidding.  Another poll finds that a scant 15% of Americans trust Biden for COVID information.  A third poll by Quinnipiac gives Biden an overall abysmal approval rating of just 33%.  Pesky mosquitos are held in higher esteem.

What do all of these polls tell us?  That Joe Biden, as many predicted, is a stupendous failure as president.  The news website “Axios” even publish an article entitled, “Biden’s Epic Failures.”  It’s a long list, so pull up a chair and get comfortable.  Never before has an American president bombed so badly and performed so clumsily in such a short period of time.  But anyone acquainted with Biden’s record in public office over the past 5 decades is not at all surprised.  Incompetence has always been Joe’s calling card —a tired and hackneyed politician who can’t manage to think straight.

Cicero once observed, “Every person makes mistakes, but only a fool persists in his delusions.”  I’m guessing that the great Roman statesman must have known a fool just like Joe Biden.  Our current president’s delusions of certitude and righteousness have led directly to his early political demise.  Unfortunately, the damage he is doing to the economic landscape of our nation is devastating.  Americans are suffering while old Joe, with delusions of grandeur, chases his radical social agenda.

It didn’t have to be that way.  In fact, Joe promised it would not.  He vowed to revitalize our economy, halt the pandemic, end the rage, and heal the divide.  He assured us that he would act as a moderate and govern from the center.  None of it has come true.  It was all a lie to get elected.

On the eve of one year in office, we can look back in horror at how Biden has self-inflicted one crisis after another —the southern border disaster, the deadly Afghanistan debacle, anemic jobs reports, runaway inflation, shortages of goods and services, choking energy dependence, unchecked violent crime, and threats from Russia, China, and Iran.  All the while, the virus he solemnly promised to “shutdown” rages on.

Is Biden tackling any of these problems in earnest?  No.  He signed on to the liberals’ Green New Deal policies, drove America away from energy independence, pursued tax-and-spend legislation that only exacerbates the inflationary threat, labeled concerned parents as domestic terrorists, threatened to pack the Supreme Court and abolish the filibuster, and lifted not a finger to tamp down the rising crime that has rendered major cities a wreckage of fear and loathing.

Biden’s bromide for what ails America is a smothering federal voting law.  Huh?  That’s right.  All will be well and democracy saved, if only Congress will approve a bill that stands zero chance of passing.  Stop scratching your head.  It won’t help.  You’ll never be able to figure out how a voting law will cure the economic and pandemic-related seizures that have left the country on life support.  It’s the equivalent of telling a cancer patient to go suck on a bottle of Pepto Bismol.

Joe is an empty vessel, an aging and senile performer who reads words written for him by his handlers.  His histrionics over “voting rights” is nothing more than a diversion.  The puppeteers who manipulate the strings hope to distract from his (and their) own disastrous agenda by ginning up hysteria over the election boogeyman.  It’s a slight-of-hand that should fool no one.  In reality, Biden is pandering to the progressive wing of the Democratic Party —an exceedingly small, but boisterous, fringe that has commandeered an outsized role in American politics.  Joe is also trying in vain to consolidate power for a party that is quickly losing it.

To accomplish this, Biden has hyper-inflated the mortal dangers of opposing his voting panacea.  If you’re against it, you’re a White Supremacist, a racist, and the ghost of Jim Crow.  You’re Jefferson Davis, George Wallace and Bull Connor all rolled into one.  No amount of frenzied propaganda or racist demagoguery has been spared.  Biden will pillory anyone who dares to disagree with him.  His litmus test is the color of your skin.  So, you may be wondering, just who is the bigot here?  Joe Biden, of course.

The president’s unpresidential speech in Georgia a few days ago hit a low watermark, even for Biden.  Al Sharpton, who knows a thing or two about race baiting, blasted Joe’s rant, calling it a “you’re going to hell” tirade that would only alienate most voters.  For once, the Reverend was right.  Sen. Dick Durban, the number two Democrat in the Senate, conceded that Biden “went too far” in his racially charged harangue.  You think?

Almost immediately, the White House transitioned to damage-control mode and began backpedaling furiously.  Chief flack Jen Psaki offered an abstruse word salad that her boss was not making a “human” comparison to segregationists and those who oppose his voting bill.  What’s that?  Say again?  I’m trying to make sense of that senseless statement, Jen.  One more time for the uneducated, please.

Biden’s diatribe of rage extended beyond the usual suspects —Republican racists, that is.  He took direct aim at two Senators in his own party for failing to capitulate to his demand that they kill the longstanding filibuster rule to pass his voting bill.  He bullied Joe Manchin and Kyrsten Sinema with all the aplomb of a tree surgeon performing a heart transplant.  It didn’t work.  His thuggish tactics had the opposite effect of steeling their resolve against him.

Forget that Biden famously railed against changing the filibuster on numerous occasions while serving in the Senate.  He called it “disastrous” for democracy.  Senate Majority Leader Chuck Schumer once said that renouncing the filibuster would be “doomsday for Democracy.”  It’s funny how fungible democracy can be when it’s exploited as a political football and tossed around for partisan gain.  In Biden’s Washington, a principled stance always succumbs to political expediency.

Naturally, the media lapdogs who serve as an instrumental arm of the Democratic Party took up Joe’s cause with gusto.  They condemned Sinema in particular as “a soulless coward” and “a menace to Democracy.”  Others repeated ad nauseam that “Democracy is now hanging by a thread.”  What is happening here is obvious.  The liberal media elite, in close partnership with Biden, have now elevated the “politics of rage” to an art form.  Pop art.  Which, in my judgment, stinks like locker socks in a high school gym.

Biden promised us civility.  He produced animus.  He pledged unity, and gave us division.  Instead of healing the nation, he opened new wounds.  In one short year, Joe has replaced the prospect of good will and bipartisanship with hostility and hate.  If you have the audacity to oppose him or disagree with his progressive agenda, you will be denounced and demonized.

Receiving far less attention is Biden’s voting legislation itself.  There are two bills, actually.  Together, they would gut voter identification laws in all states and make it difficult to determine the eligibility and verification of voters.  Political operatives would be allowed to “harvest” mail or absentee ballots by going to peoples’ homes to retrieve them.  The last nationwide commission to examine the idea called it “a recipe for fraud.”

Polls show that Americans overwhelmingly support voter identification laws which exist in both red and blue states.  This improves election integrity.  But Biden claims they disenfranchise minority voters, despite no empirical evidence of that.  It’s curious that he never criticized Delaware’s voter ID law.  In fact, few states have more limited voting than Biden’s state, where mail-in ballots are restricted.  And Delaware has no in-person early voting whatsoever.  But Biden is not the only hypocrite.  Schumer has never objected to New York’s onerous voting rules or tried to change them.

Proponents of Biden’s bills also claim that they are needed to override Georgia’s new voting law which they decry as voter suppression.  In truth, the Georgia law significantly extends the number of days that voters can cast ballots, adding weekends for early voting.  Georgians are also allowed to vote by mail.  No excuse for an absentee ballot is required.  Drop boxes have been expanded and are now required for all 159 counties.  It is now easier to produce identification in Georgia.  Those who do not have a driver’s license, can show a free state voter ID card, or offer the last four digits of their Social Security number, a bank statement or even a utility bill.  It is far more difficult to vote in Biden’s home state than it is in Georgia.  And in Schumer’s state, too.  In Georgia, anyone can get a mail ballot.  But not in New York.

Joining me now to talk about this… is the former Speaker of the House of Representatives, Newt Gingrich.  He is the host of the podcast, “Newt’s World” and the author of his latest book, Beyond Biden.