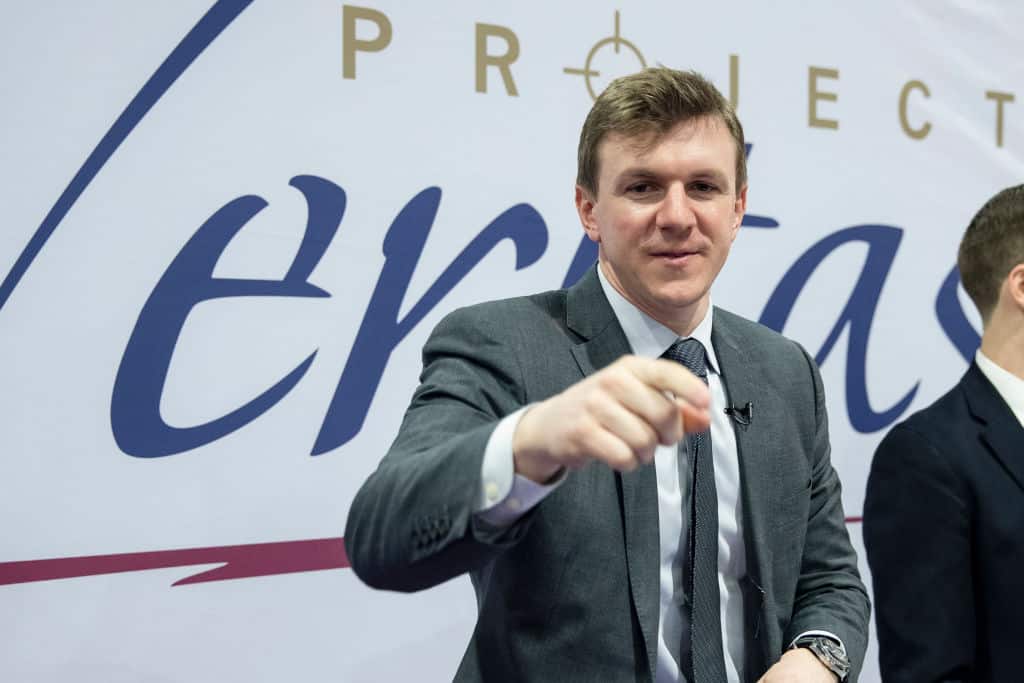 I expect a battering ram to demolish my front door any minute now. But wait, it’s 7 am. and the sun is up.  Whew!  The hooligans wearing FBI jackets only do pre-dawn raids.  I’m safe for another day.  Maybe.

This is the world Attorney General Merrick Garland and FBI Director Christopher Wray have wrought.  Their latest shredding of the Constitution involves the targeting of any journalist who happens to have derogatory information about their mob boss president, Joe Biden.

I’ve got plenty of filth on old Joe, since he’s spent his entire political career wallowing in the corrupt mud of Washington politics.  So, maybe tomorrow I’ll get the Project Veritas treatment by the goons at the FBI.

I expect a battering ram to demolish my front door any minute now.

On Saturday, ten of them showed up before dawn at Veritas founder James O’Keefe’s apartment in New York.  Armed with “a battering ram and white blinding lights,” he recounted on Hannity, they handcuffed him and threw him against the hallway barely clothed.  No word on whether they gave him a wedgie.

But they spent a couple of hours ransacking his abode, confiscating two of his iPhones and sifting through his dirty laundry.  Not surprisingly, the feds also seized his reporter notes, sources, and his Veritas donor list.  So if you ever spoke with O’Keefe or sent his group a sawbuck, you’re screwed.  Bolting the door won’t deter a phalanx of FBI thugs.  You should hide in the cellar and take a hammer to your cell phone.

What was the death penalty offense that O’Keefe committed?  Brace yourself.  He was once given a copy of the diary of Biden’s daughter, Ashley Biden.  The journal purportedly contains unflattering information about dear old dad.  So, naturally, the full force of our government’s might and resources are now devoted to tracking down any journalist who once laid eyes on it.  Your taxpayer dollars hard at work.

Now, you might be saying to yourself…WTF???   I’m with you on that.  I mean, we’re talking about a diary, for God’s sakes.  The DOJ and FBI are involved?  Seriously?

It’s bad enough that a cavalcade of crooks like James Comey, Andrew McCabe, Peter Strzok and others who once ran the FBI like a racketeering organization managed to utterly decimate the once-vaunted reputation of the bureau.  But not much has changed since all three of those knuckleheads got canned.  Chris Wray is now in charge.  He’s the new Darth Vader of law enforcement.

Wray takes his marching orders from Garland who snaps to attention every time Biden mumbles something that resembles a semi-coherent directive.  Apparently, Joe blew a gasket when he found out about his daughter’s disparaging diary.  The DOJ and FBI have been assigned to track down and burn every last copy.  They’re apparently the new Ministers of Propaganda.  Anyone who might have touched it will be shuttled off to the gulags.

All of this is both absurd and frightening.  The treatment of O’Keefe can only be described as outrageous and lawless.

First, it’s baffling why federal prosecutors are involved in the alleged theft of a diary.  That’s normally a state crime handled by local authorities.  And while there does exist a set of federal burglary and robbery statutes, most of them apply only to theft of government property or crimes against federal institutions.  Ashley Biden is a private citizen and her diary doesn’t constitute government property.

Second, under federal regulations, Garland and/or his deputy attorney general have to sign off on any warrant or subpoena involving news organizations and journalists.  It’s doubtful that DAG Lisa Monaco would have approved the FBI warrants.  So, this has Garland’s grimy fingerprints all over it.

Third, the attorney general executed an order four months ago banning the use of warrants and subpoenas on journalists in all leak investigations.  But the standards he set forth —protection of cherished First Amendment rights— also apply to this case.  So, he’s violating the very principles of his own order.

Fourth, the DOJ has a disqualifying conflict of interest that is so glaring that a blind person could see it.  Recusal is not optional; it is mandatory.  The Justice Department cannot investigate or prosecute a case involving a family member of the president who presides over the DOJ.  Under strict federal regulations, Garland is required to remove himself and his entire department.

According to O’Keefe and his attorney, the FBI’s search warrant identified “misprision of a felony” as grounds for their home invasion.  That must have been the bureau’s version of an inside joke.  Misprision of a felony is a dusty old law that is rarely enforced.  It applies mainly to public officials who have a duty to report knowledge of a felony to the appropriate authorities.  It has no relevance to the actions of Project Veritas and a private citizen.  (Not to mention that the fallowed law is classified as a mere misdemeanor.)

The warrant also cited the transport of knowingly stolen material across state lines.  Yes, there happens to be an overly broad federal statute to that effect, but its application here is a monumental stretch.  There is considerable evidence that the diary wasn’t stolen at all, but left behind by Ashley Biden in a room that she previously occupied and discovered by someone else.

Moreover, O’Keefe had no idea whether the diary was stolen or not.  He never published any of the information contained therein, and he insists he voluntarily handed it over to law enforcement a year ago.  “What more could I have done?,” he asked.  Good question.

Five decades ago in the famous Pentagon Papers case, classified government documents were stolen and delivered to the media which then published their damning contents of how the Johnson Administration had lied about the war in Vietnam.  The journalists at The New York Times and The Washington Post did not have their homes raided by the FBI.  More recently, the FBI did not slap search warrants on reporters who published the tax records of President Donald J. Trump that were allegedly stolen.

It is fundamental in law that journalists cannot be prosecuted for airing or publishing stolen information, as long as the reporter is not involved in the theft itself.  The same principle applies to the publishing of leaked classified information.  The leak itself is a crime, but reporting it is not.  It is an egregious abuse of power for the government to raid the homes of journalists to seize their work product and invade their sources.

Joe Biden & Kamala Harris both promised —disingenuously, as it turns out— that the Department of Justice would not be used as a political cudgel.  Garland offered the same hollow vow.  But in less than a year, they have politicized and weaponized the DOJ to crush dissent or to target conservatives.

Garland’s abysmal record includes threatening parents who complain about critical race theory —they’ll be treated as domestic terrorists.  The AG also sued Georgia over its voting rights law and Texas over its abortion law immediately after Biden voiced his complaints.  These are politically motivated actions by the Justice Department.

It’s clear that Garland is doing Biden’s bidding to exploit the levers of power and persecute anyone who has the audacity to disagree.  Suppression of dissent through the use of threats and intimidation is now the norm.  That is the only logical explanation for pursuing a case involving Biden’s daughter and her ridiculous diary.

It’s disgraceful that Christopher Wray would allow the FBI to be misused like this —targeting parents and now journalists.  It’s not at all surprising that the hopelessly corrupt Southern District of New York is involved as the prosecuting force that sought the warrants against Project Veritas.  The Southern District has a long record of abusive tactics.

Garland’s heavy handed maneuvers are reminiscent of when Obama’s IRS targeted conservative groups.  Or when A-G Loretta Lynch protected Hillary Clinton in her email scandal.  Or the political persecution of Michael Flynn by the FBI and Bob Mueller’s team of partisan hacks.

Liberal journalists these days love to trash O’Keefe and Project Veritas for their undercover work.  The group is known for its video recording of people admitting to bias and wrongdoing…and exposing acts of corruption.  But their leftist critics forget that some of the best journalism in America was accomplished the same way.  Upton Sinclair’s reporting on the horrid conditions in the meatpacking industry.  Nellie Bly going undercover to expose the abuses in a lunatic asylum for women.

Today’s mainstream media doesn’t seem terribly interested in an unconstitutional assault on First Amendment rights.  But if it happened to them, they’d be screaming like banshees in the alleyway all night long.