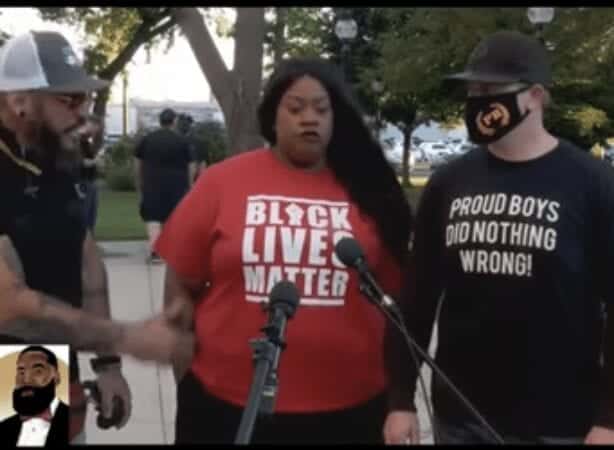 After the first presidential debate last week, the notion that President Trump was a white supremacist spread like wildfire after his mention of the “Proud Boys.” That is, until one Black Lives Matter leader actually had the intellect to look into the organization. On October 2nd, Black Lives Matter and Proud Boys stood together at a Salt Lake City press conference, but the mainstream media had zero interest in picking up the positivity.

Salt Lake City’s KUTV released video of the Proud Boys along with the leader of Black Lives Matter, Northern Utah, Jacarri Kelley. The two groups gathered at Washington Square where Kelley wore a red Black Lives Matter t-shirt and stood in between one member of Proud Boys and another man whose shirt read “Proud boys did nothing wrong.”

“When I heard the words ‘Proud Boy’ that scared me to death because I am a Black Lives Matter leader” began Kelley in regard to President Trump’s mention of the group at last week’s debate. “And I have been working with these proud boys to know who they truly are. Because myself, I had no idea who the proud boys were. I heard the words proud boys mentioned throughout the activist community and I just didn’t know who they were” said Kelley.

So, Kelley did what rational people do; have a discussion. “And then I started to hear there were white supremacists…I actually got into a couple conversations with a couple men that happened to be proud boys and my question to them is what is your purpose?” said Kelley. “And they said they are just here to make sure nothing goes down” she added.

Later on, “a colleague of mine sent me a picture of Thad” said Kelley as she pointed to the man standing next to her insinuating he is the man she saw in the picture. “And I was like ‘how is he a white supremist and he’s not white?’ Like he’s Hispanic, or he’s Polynesian, I even thought he was black for a second.”

Kelley then wanted to learn and understand more about the group which the media labeled white supremacists for no other reason that Trump mentioned them. “And then we set up a meeting between myself, [inaudible] and Thad, where we sat down and had a conversation about each other’s myths that we heard about the Black Lives Matter movement and about the Proud Boys.”

And what was the result of this civil conversation? “We came to realize we had more in common than not. And in order to combat evil and racism and hatred in this country we do need to be able to reach across the aisle and have these tough conversations that everybody are scared to have.” Kelley then made a statement the media never will about the Proud Boys: “I learned that they’re not white supremacists. These are proud American men.”