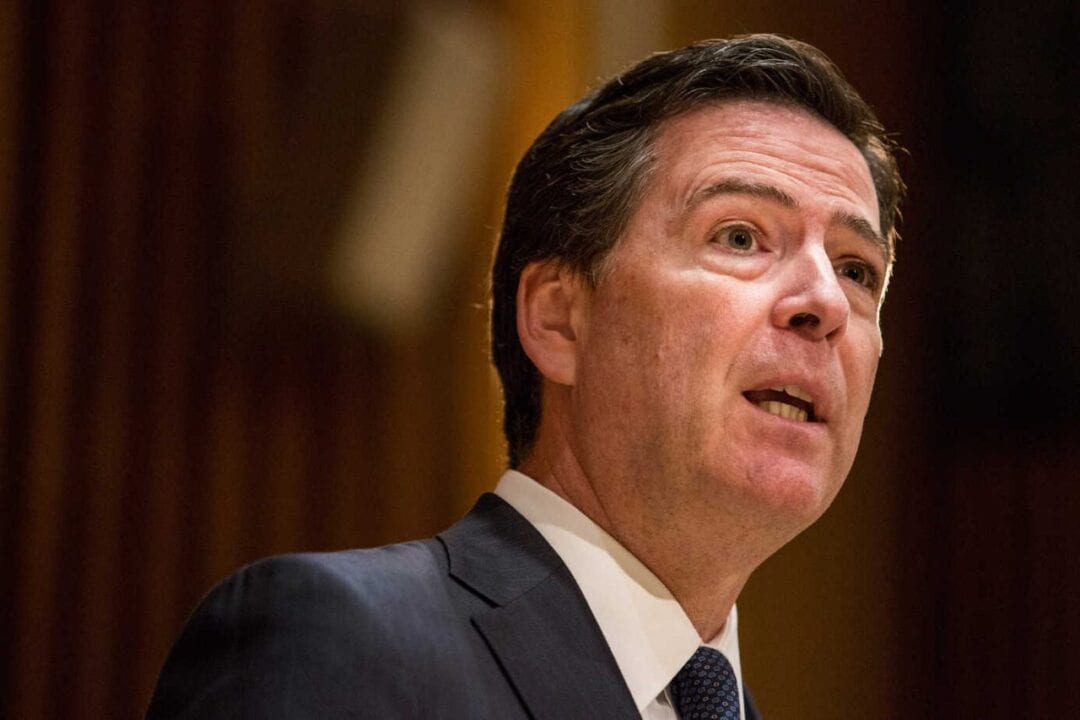 Newly obtained documents confirm that James Comey’s FBI was running a secret and corrupt counterintelligence operation against the Trump campaign in the summer of 2016 and repeatedly deceiving the Foreign Intelligence Surveillance Court (FISC) thereafter in order to wiretap a Trump campaign associate.

The disclosure was the result of a federal lawsuit and a year of litigation. Despite efforts by FBI Director Christopher Wray to obstruct, a federal court issued an order that forced the FBI and Department of Justice to produce the records known as “302 reports.” They are a summary of interviews FBI agents conducted with Bruce Ohr, a top DOJ official.

These 302s show that the FBI and DOJ were warned repeatedly by Ohr that ex-British spy Christopher Steele was virulently biased against the target of their investigation, Trump.

That bias tainted the credibility of the “dossier” Steele composed and upon which officials in the Obama administration relied when they officially launched their counterintelligence investigation on July 31, 2016. The “dossier” was also the basis for the surveillance warrant against former Trump campaign adviser, Carter Page.

The FBI and DOJ ignored the warnings of bias and actively concealed it from the FISC. They never advised the judges that the information contained in the “dossier” was “unverified.”

They hid from the judges that it was all funded by the Clinton campaign and the Democratic National Committee (DNC).

The court was never told that Ohr’s wife helped cultivate some of the researched used against Trump. Having fired Steele for leaking to the media and lying about it, the FBI and DOJ represented to the judge that Steele was “reliable” when they knew he was not. They continued to rely on him months after his termination.

An apparent fraud was perpetrated on the court not once, but four times in successive warrants through June of 2017. These are dishonest, if not felonious acts.

On July 5, 2016, Comey stood before television cameras and microphones at a nationally watched news conference.

By mangling the law and contorting the facts, he announced that he was exonerating Hillary Clinton of any crimes for her mishandling of thousands of classified documents.

At roughly the same time, some 3,660 miles away from Washington, Comey’s FBI was meeting in a London building with Steele who conveyed the contents of his initial “dossier” memo dated June 20, 2016, with agent Michael Gaeta. When the FBI agent read the document, he was stunned and remarked, “I have to report this to headquarters.” Thus, on the same day, Comey cleared Clinton, the Witch Hunt against Trump began in earnest.

On July 30 Steele met with Ohr at 9 a.m. at the Mayflower Hotel in Washington.

Steele shared his “dossier” but added that the FBI already had it in its possession.

Immediately thereafter, Ohr convened a meeting with FBI Deputy Director Andrew McCabe and the FBI lawyer who worked for him directly, Lisa Page.

The 302 reports corroborate Ohr’s congressional testimony behind closed doors that was made public in February of this year.

He told lawmakers that he specifically warned McCabe and Page that the information in the “dossier” was highly dubious and driven by a biased author who despised Trump.

He also advised that it was commissioned by Fusion GPS where his wife worked because, “I wanted the FBI to be aware of any possible bias.”

Page 125 of Ohr’s congressional transcript is especially revealing. “I told them that Steele was desperate that Donald Trump not get elected,” he stated.

He pointedly informed McCabe and Page that Trump’s political rival, the Clinton campaign, was financially underwriting the “dossier,” which would call into question its veracity because the campaign had a motive to distort or fabricate in order to damage its opponent.

Ohr testified that he cautioned the FBI, “These guys were hired by somebody relating to –who’s related to the Clinton campaign.”

In truth, the funding wasn’t merely “related” to the campaign, it was the campaign, along with the DNC. Ohr also disseminated the “dossier” to Peter Strzok and Joe Pientka at the FBI. But Ohr wasn’t done.

Shortly after the July 30 breakfast with Steele, Ohr gave the same improbable intelligence to three prosecutors at the Justice Department during another meeting.

Two of those individuals, Andrew Weissmann and Zainab Ahmad, were later hired by Robert Mueller to be a part of his assembled team of special counsel prosecutors that escalated the investigation of Trump beyond the FBI and DOJ. They, too, were informed by Ohr that the Clinton campaign and Democrats had paid for the “dossier” and that Steele was severely biased against Trump.

Instead of investigating Clinton and her confederates for conspiring with foreigners to defraud the U.S. government or violate campaign finance laws, the FBI used the Clinton-Russian “dossier” to target Trump despite a dearth of evidence that any of it was true.

Even though Steele was fired by the FBI as a confidential informant, the new 302 reports confirm that Comey’s FBI kept returning him as a source. By using Ohr as a conduit, they continued to receive information from Steele.

This continued even after Trump was elected and inaugurated as president. Indeed, Steele kept feeding the bureau his phony information through May of 2017.

Similar to a “money-laundering scheme,” the complex transfer cleansed the dirty information to obscure the original source –Steele. But the information, of course, was largely fabricated and/or the product of Russian disinformation.

It should be remembered that a counterintelligence investigation is designed to collect evidence of foreign threats to U.S. national security. Normally, the president is the beneficiary of such information.

Here, Comey’s FBI was abusing its counterintelligence authority by using it against Trump. Moreover, Comey appears to have been lying to the president about it.

In early 2017, he kept assuring Trump he was not being investigated. These documents show that he obviously was, well into his presidency. And yet, the FBI had no evidence that corroborated any of Steele’s “collusion” allegations.

As John Solomon of the Hill has reported, the FBI developed a “spread-sheet like document” that was 90 percent empty of any proof. This did not deter them. They continued to investigate Trump. And when Comey was fired, he helped engineer part two of the Witch Hunt –the special counsel investigation.