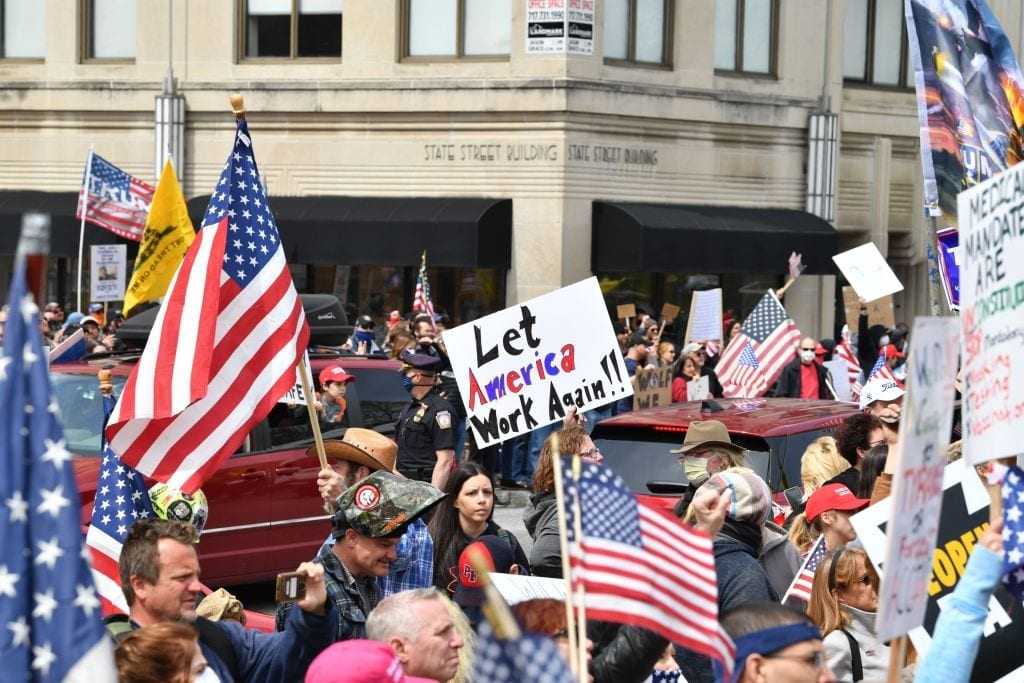 [otw_shortcode_dropcap label=”A” font=”Ultra” background_color_class=”otw-no-background” size=”large” border_color_class=”otw-no-border-color”][/otw_shortcode_dropcap]ttorney General William Barr is warning that some of the stay-at-home orders issued by governors and local leaders are “disturbingly close to house arrest.”  He vowed to scrutinize any decrees and enforcement actions that offend civil liberties and to consider legal action where necessary.

In an interview Tuesday on “The Hugh Hewitt Show,” a conservative radio program, Barr cautioned state officials against directives, such as austere quarantines and business closures, that infringe on the constitutional rights of Americans.  By contrast, he praised President Trump’s more measured approach of recommended guidelines in combating the coronavirus and his plan for states to reopen economic activity on a gradual basis.

“I think the president’s guidance has been, as I say, superb and very common sensical, and I think a lot of the governors are following that,” said Barr.  “And you know, to the extent that governors don’t and impinge on either civil rights or on the national commerce, our common market that we have here, then we’ll have to address that.”  The attorney general stated that the Justice Department would consider intervening in support of citizens’ lawsuits against officials who have gone “to far.”

Barr is right that some state and city leaders have exceeded their authority under the guise of emergency powers.  In the process, fundamental individual rights have come under assault.

You will not find the word “emergency” anywhere in the Constitution of the United States.  The Framers designed it as a forward-looking document that would function even in extreme emergencies.

While enhanced powers are specifically granted during times of war, invasion, rebellion or insurrection, there are no express provisions granting government officials extraordinary authority because of a crisis in peacetime.

This was not because the Founders were bereft of vision or foresight.  Quite the opposite is true.  The late Supreme Court Justice Robert Jackson explained it this way:

“The forefathers knew what emergencies were, knew the pressures they engendered for authoritative action, knew, too, how they afford a ready pretext for usurpation. We may also suspect that they suspected that emergency powers would tend to kindle emergencies.  Aside from suspension of the privilege of habeas corpus in time of rebellion or invasion. when the public safety may require it, they made no express provision for exercise of extraordinary authority because of a crisis. I do not think we rightfully may so amend their work.”

To put it plainly, government may not issue edicts —even during a public health crisis— that abridge the rights that are guaranteed in the Constitution.  These precious rights are cherished and preserved at all times and in all circumstances.  Even during the Civil War, the Supreme Court warned that abrogating constitutional rights during “great exigencies” would lead directly to “anarchy or despotism.”

To put it plainly, government may not issue edicts —even during a public health crisis— that abridge the rights that are guaranteed in the Constitution.

Americans enjoy concrete individual rights and civil liberties protected by the Constitution. They are absolute rights, not qualified or conditional privileges that can be suddenly suspended whenever an emergency may arise.

It is upon this basis that Attorney General Barr is examining the actions of state governors and local officials whose orders during the pandemic are so draconian that they appear, in some instances, to have violated constitutional rights.

As I argued in a recent column, there have been enumerable examples where decrees and police power enforcement have crossed the legal line of permissibility.  The right to assemble, free speech, and religious freedom have all been subjected to troubling encroachment and abuse.

Under the 14th Amendment’s Due Process clause, state governments must follow and respect the Bill of Rights.  Historically, states have been given limited discretion and temporary latitude in health emergencies. However, they have the burden of showing that their compelling state interest corresponds rationally to the crisis and that any restrictions are narrowly tailored to address the threat itself.

This is where too many state and local leaders have crossed the constitutional line.  Mass quarantines have been ordered, instead of targeted ones that focused on infected or symptomatic individuals, as well as those who are at the greatest risk such as the elderly, the infirm, and those with compromised immune systems.

Stay-at-home orders, accompanied by arrests and enforcement penalties (both criminal and civil) are a radical departure from prior emergencies.  They set a dangerous new precedent for the future where, as Justice Jackson warned, “emergency powers will tend to kindle emergencies.”  Will we face closures and lockdowns in perpetuity?

America has faced deadly contagions many times in its 200-plus year history.  Never before have we shutdown nearly all businesses, paralyzed the nation’s economic activity, and destroyed the livelihoods of tens of millions of people. Yes, saving lives is important, but at all costs?  Even widespread financial misery?

Fox News senior political analyst Brit Hume correctly observed that we should “consider the possibility that this lockdown —as opposed to the more moderate mitigation efforts— is a colossal public policy calamity.”  Many of the shuttered businesses will never reemerge.  The cascading unemployed will have no jobs to which they can return.  Income, savings and optimism will have vanished, replaced by a bleak future.

What then?  Perhaps, with the benefit of hindsight, we’ll contemplate how we allowed governors and local leaders to defy our constitutional freedoms and sow the seeds of self-inflicted economic ruin.

In this article:Constitution, Coronavirus, lockdown