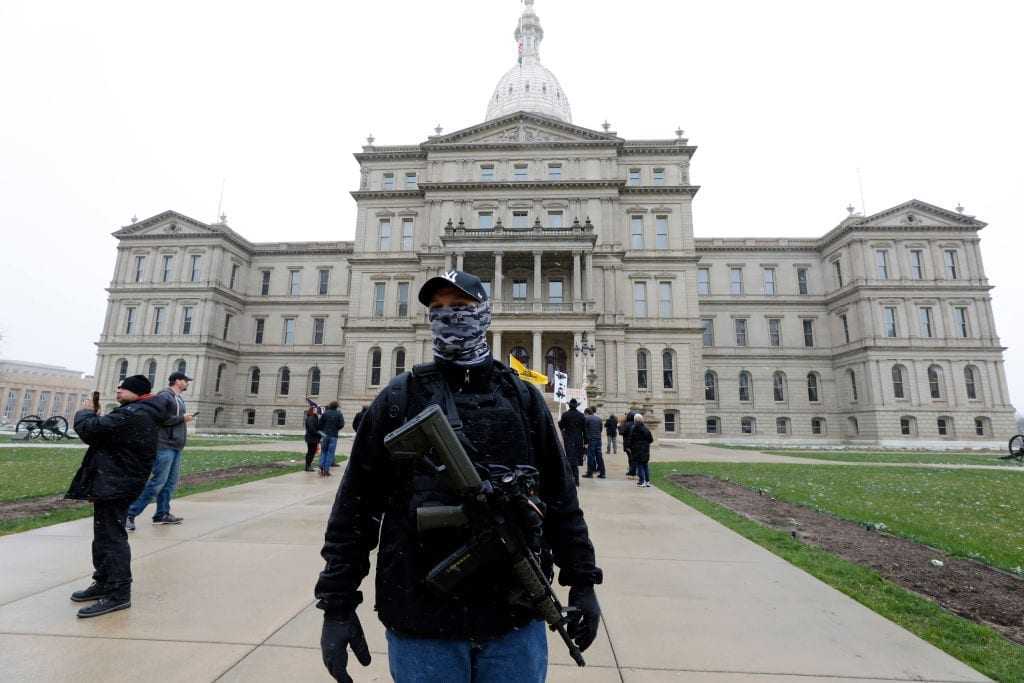 People take part in a protest for "Michiganders Against Excessive Quarantine" at the Michigan State Capitol in Lansing, Michigan

Driven by fear, panic, and irrational reliance on deeply flawed statistical “models,” state governors and local leaders have dangerously jeopardized more than 200 years of constitutional rights and civil liberties with their imposition of mandatory mass quarantine orders.  No exigent circumstances, however well-intentioned, can justify many of these authoritarian tactics employed to fight the COVID-19 contagion.

While it is true that the law authorizes states to respond aggressively during health emergencies, such actions have limits.  Restrictions must be rational, consistent, and justified.  Power is abused when the government orders quarantines that are arbitrary, oppressive and unreasonable because they arguably violate the 5th and 14th Amendments’ rights of Due Process and Equal Protection. Some actions have violated the Bill of Rights.

Restrictions must be rational, consistent, and justified.

Depriving people of their liberties (the right of association, assembly, religion, and travel) is constitutional only when it is judicious and circumscribed.  For example, confining people who show no symptoms of the Coronavirus is constitutionally suspect.  Voluntary, not mandatory measures would have been a better course and less intrusive.  Recommended social-distancing guidelines are one thing; sweeping orders of confinement under threat of criminal or civil penalties is another.  They are not narrowly tailored, as they should be, to infected persons who pose a risk to others.

Are the wholesale lockdowns, then, rational and justified?  To answer that question, consider this: governors and city leaders completely closed down businesses across America and confined people to their homes by relying almost entirely on two statistical models that were grossly inaccurate.  Economic activity was brought to a grinding halt because of data that was supposed to be well-sourced, credible and trustworthy.  Except that it wasn’t.

Many government leaders relied on an online mapping tool by the name of “COVID Act Now” that was so alarming in its catastrophic death projections that city and state leaders immediately instituted shutdowns in many regions of the nation. The forecasts were wildly wrong, as Madeline Osburn wrote in the Federalist:

“Perhaps the goal of Covid Act Now was never to provide accurate information, but to scare citizens and government officials into implementing rash and draconian measures.  The creators even admit as much with the caveat that ‘this model is designed to drive fast action, not predict the future.’”

The other model (if you can call it that) was produced by the University of Washington’s Institute for Health Metrics and Evaluation.  Not long ago, it predicted as many as 240,000 U.S. deaths, only to amend within days that figure to 60,000. The media happily attributed the downward revision to the celebrated success of social-distancing, never realizing that the model had already factored full social-distancing into its calculations:

Andrew C. McCarthy of National Review, who has kept careful track of this particular model’s revisions, correctly concluded that it was utterly discredited:

“The model on which the government is relying is simply unreliable.  It is not that social distancing has changed the equation, it is that the equation’s fundamental assumptions are so dead wrong they cannot remain reasonably stable for 72 hours.”

Bear in mind that the now revised figure of 60,000 deaths is slightly lower than the CDC’s estimate (high end) for common flu deaths this season, as I noted in my last column.  But, of course, we are scolded by the mainstream media for having the temerity to draw such a common-sense comparison.  The Washington Post has labeled that a “zombie claim.”

The only “zombie claim” of which I am aware was the reckless and ludicrous assertion by Governor Gavin Newsom that he was shutting down California because 25 million people in his state would contract the virus.  No credible statistical formula supported that claim.

So, to answer my own question: No, not all of the extreme and self-destructive actions of government officials have been rational or justified.  They were, in many instances, overwrought.  This calls into question their constitutional validity.

In a column by David Harsanyi entitled “Coronavirus Authoritarianism Is Getting Out of Hand,” he wages a compelling argument that America should be preserving our rights and freedoms in a time of crisis.  Yet, the opposite is happening:

“Politicians act as if a health crisis gives them license to lord over the most private activities of the American people in ways that are wholly inconsistent with the spirit and letter of the Constitution.  It is an astonishing abuse of power to issue stay-at-home orders, enforced by criminal law, empowering police to harass and fine individuals for nothing more than taking a walk.”

Harsanyi offers numerous examples of heavy-handed enforcement.  They include dragging a passenger off a bus for not wearing a face mask, handcuffing a father in front of his family for playing T-ball with his daughter in an empty park, and three Massachusetts men being arrested for crossing state lines to play golf in Rhode Island.

At times, hysteria has crossed the threshold of insanity.  Several jurisdictions banned drive-in church services on Easter in an audacious affront to the First Amendment. Congregants were fined for sitting in their cars (windows up) and listening to the sermon via their radios. This is beyond irrational; it’s punitive toward religion.

Arbitrary and capricious orders have come to define the fatuousness of pandemic decrees.  In Florida, where most businesses have been forced to close, professional wrestling (World Wrestling Entertainment or WWE) is inexplicably deemed “an essential service.”  I guess you could say, the fix was in.  Wrestling is “critical to the economy,” the governor explained.  But thousands of other shuttered businesses are not?

The mass shutdowns have left the economy paralyzed and more than $1 trillion in economic activity destroyed. 22 million people are unemployed, penniless, hungry and desperate.  You can feel the despair.  As I’ve argued before, many Americans are far more fearful of the economic catastrophe than the virus itself.

Half of U.S. households have no emergency savings.  They live pay-check-to-paycheck.  Now, the paychecks are gone.  Unemployment benefits and a stimulus check from the government are not enough to survive.  They are out of money and living on the brink.  More than anything, they want to go back to work.

But will they even have jobs to return to when the lockdowns are lifted?  Have governors and local officials extinguished their livelihoods, inflicting even more pain and suffering?

The banner headline on the front page of Thursday’s New York Times offered a chilling prognosis: “Sales At U.S. Stores Hit ‘Catastrophic’ Depths.”  And it’s not just retail, but industrial production and manufacturing are on the precipice. Businesses everywhere are cratering, which means temporary joblessness could become permanent for millions of people.

Historians will analyze the steps taken by government officials.  They may well conclude that leaders were too reliant on health experts and erroneous “models.” Not enough consideration was given to the advice of economists and how excessive action might strangle the nation’s financial health.

A month ago, Dr. Anthony Fauci said that “we’ll be thankful that we’re overreacting.” Tell that now to the millions of Americans who may never recover from the destructive wounds inflicted by their own government.

Our most precious freedoms were established by the Framers in the Bill of Rights.  Those rights and civil liberties are being nullified and crushed by the arrogance of some governors who have blatantly overstepped their executive authority under the guise of public safety. On Fox News, Governor Phil Murphy of New Jersey quipped that the Bill of Rights are “above my pay grade.”  He must have forgotten the oath of office in which he swore to uphold the Constitution. Murphy’s inane, cavalier comment disqualifies him from serving in any capacity as a public official.

Fortunately, Americans are smarter than Murphy and other governors like him. Citizens are mobilizing to fight back against the intrusive edicts of their authoritarian leaders.  Large protests have taken place in Michigan, Kentucky, Ohio, North Carolina, and Virginia.

My Fox colleague Judge Andrew Napolitano warned, “If we don’t take our freedoms back, they might not come back.”  Let’s hope it’s not too late.