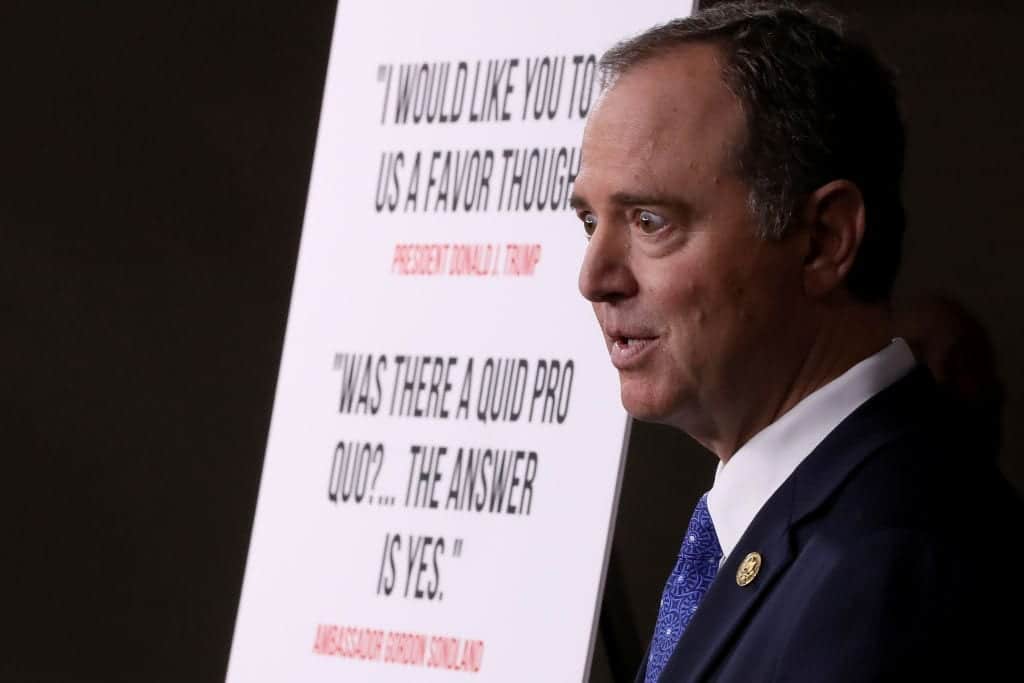 One day after Republicans issued a 110-page report arguing that President Trump did not commit an impeachable offense, Democrats doubled down Tuesday with a roughly 300-page report claiming that he did.

The House Intelligence Committee voted 13-9 on a party-line vote to adopt the Democratic report – with all Democrats voting in favor of sending it to the House Judiciary Committee and all Republicans voting against the move.

If nothing else, this undermines the repeated promise by House Speaker Nancy Pelosi, D-Calif., that any impeachment should be bipartisan. Her original premise was correct.

Impeachment is a grave step of last resort to remove a duly elected president. The act of wrongdoing must be sufficiently egregious, and the evidence so clear and convincing, that the constitutional remedy of impeachment merits support from both political parties represented in Congress.

However, unlike previous presidential impeachments, not a single member of the president’s own party has yielded on the matter. It also reflects the sentiment of most Americans who are split along party lines. This alone should give Democrats pause to reconsider the dangerous path they have undertaken.

House Intelligence Committee Chairman Adam Schiff, D-Calif., presided over five days of impeachment hearings involving a dozen witnesses. Contemporaneous with the release of his report Tuesday, Schiff tweeted: “The impeachment inquiry uncovered overwhelming and uncontested evidence that president Trump abused the powers of his office to solicit foreign interference in our election for his own personal, political gain.”

Schiff’s claim is brazenly untrue on many levels.

First, if the evidence was “overwhelming,” surely Republicans in Congress and Americans at large would be so persuaded. They are not. The evidence was conspicuously underwhelming.

As detailed in my previous column, Schiff’s witnesses offered a stream of hearsay, opinion, and speculation that Trump demanded a “quid pro quo” from Ukraine – an investigation of former Vice President Joe Biden in exchange for nearly $400 million in U.S. military aid.

Yet, where is that demand or pressure or condition stated in the transcript of the July 25 telephone conversation between President Trump and Ukrainian President Volodymyr Zelensky?

If the evidence was, as Schiff claims, “overwhelming,” there would be a phrase or sentence somewhere in the transcript of the call establishing proof. It is nowhere.

Second, Schiff’s contention that the evidence is “uncontested” is demonstrably false. The Republican report itself consumes 110 pages contesting the alleged evidence.

Perhaps Schiff didn’t bother to read the Republican report, since he is convinced of his own certitude or teased by hope out of ignorance. Maybe he didn’t listen as Republicans spent hours during cross-examination casting doubt on the knowledge and credibility of the purported “fact witnesses” who trafficked in rumor, innuendo, and rank conjecture.

To argue that all of the Democratic claims were “uncontested” is to believe in the tooth fairy and the Easter bunny. 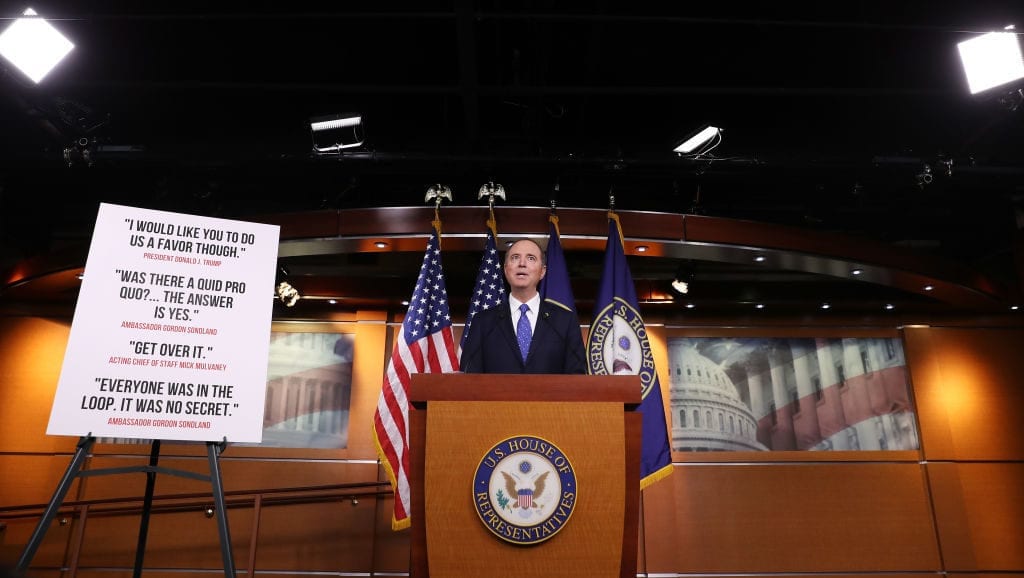 Third, Schiff’s assertion that Trump “solicited foreign interference in our election for his own personal, political gain” is nothing more than an assumption or supposition.

There is no mention whatsoever of an election in the transcript of the Trump-Zelensky conversation. Trump asked Zelensky to look into Biden’s recorded “quid pro quo” boast saying that as vice president Biden stated he would withhold $1 billion in U.S. aid from Ukraine if the chief prosecutor in Kiev was not immediately fired. In doing so, how was Trump requesting political interference for personal gain?

Schiff cannot possibly know Trump’s motive. The House Intelligence Committee chairman can only intuit the president’s intent. His clairvoyance or telepathy is not evidence in support of an impeachable offense.

Trump has stated repeatedly that he wanted to determine whether Biden committed a corrupt act by extorting taxpayer dollars to force the firing of a prosecutor who was investigating the Ukrainian natural gas company that was paying his son Hunter anywhere from $50,000 to $83,000 a month to serve on its board.

Was Biden’s demand intended to protect his son? If a president has reason to believe that a public officeholder may have engaged in corrupt behavior involving a foreign government, he has every right and duty to request that nation’s leader to investigate. The president is entitled to do so under the terms of a 20-year old treaty with Ukraine.

Biden does not enjoy immunity or amnesty simply because he is now a candidate for office as he pursues the Democratic presidential nomination.

Predictably, Nadler stacked the deck against the president, selecting three law professors who have either prejudged Trump or expressed animus toward him. Only one professor from the Republican side is permitted.

Noah Feldman, a Harvard law professor who wrote a column in October headlined “Trump’s Quid Pro Quo Is Unconstitutional.” But there is no evidence of a “quid pro quo” in Trump’s conversation with Zelensky. The Ukrainian president is on record repeatedly confirming there was no “quid pro quo.” The witnesses who testified in Schiff’s hearings only speculated or “presumed” there was a “quid pro quo.” Opinion based on multiple hearsay is not credible evidence.

Michael Gerhardt, a University of North Carolina law professor who penned a November column declaring that the impeachment inquiry was “fully legitimate” and that Trump was “trashing the Constitution.” Gerhardt also asserted that there is a “law protecting the identity of whistleblowers.” Except there is no such law guaranteeing a right to anonymity for whistleblowers, even if the current whistleblower qualified as one, which he does not according to the Justice Department. In a recent interview, Gerhardt declared that Trump has “dismissed the rule of law as being relevant to his life.”

Pamela Karlan, a Stanford University law professor who served in Obama’s Justice Department and is affiliated with the liberal-oriented American Constitution Society. Karlan has been critical of Trump from the outset of his presidency. She signed a group letter a month before the president was sworn in predicting that he would fail to take his “constitutional oath seriously.” She demanded that Trump recant his positions on racial discrimination, immigration, abortion, and other issues. His refusal to do so has likely informed her opinion that he somehow violated the Constitution.

Jonathan Turley, a George Washington University law professor, is the only witness that Republicans will be allowed to call. Turley has written about the present impeachment case, criticizing Democrats for using “poorly defined non-crimes” as a pretext to remove the president from office. Unlike Feldman, Turley observed that “the record still lacks direct evidence of a quid pro quo.” He wrote that “the current bribery and obstruction claims are forced and unsupported,” and said Democrats are “presenting the thinnest record and fastest impeachment investigation in history.”

For more than 200 years, scholars have vigorously debated what the framers intended when they devised the impeachment clause in the Constitution.

What is the precise meaning of the phrase “Treason, Bribery, or other high Crimes and Misdemeanors”? Is it strictly criminal conduct or an expansive interpretation unconstrained by statutory definitions?

What bribery meant in the late 1700s is different than what it means now. In the impeachment case against President Richard Nixon, the House Judiciary Committee determined that not all criminal conduct is impeachable. Such considerations and precedents only complicate the debate.

Most scholars agree that our Founding Fathers did not want an opposing party to remove a president for political reasons – simply because lawmakers of the other party dislike the president or his policies. Yet, that is exactly what Pelosi, Schiff, Nadler, and most Democrats are doing.

The disdain of Democrats for Trump has led to obsessive demands for his impeachment since the moment he took office. Any reason, however specious or silly, would do. A calculator would be needed to maintain a running tally of the incessant impeachment hysteria.

On Wednesday we can expect to hear the learned professors wax profoundly about the words Alexander Hamilton composed in Federalist 65 and how the Constitutional Convention struggled over the language to set what qualified as impeachable conduct, debating and abandoning various alternative proposals like “maladministration” as untenable.

The truth is that the framers were imprecise. Their meaning was undefined. As a consequence, it has been a source of consternation and confusion ever since.

The hearing Wednesday will only produce more of the same. And so it will persist into the distant future.