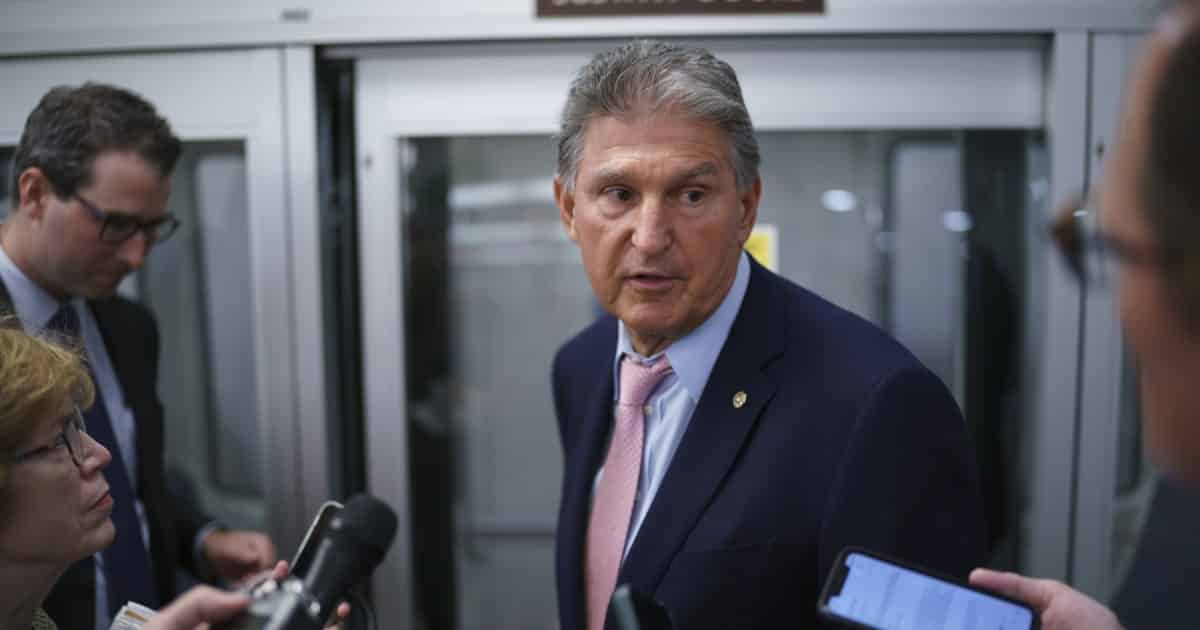 On Thursday, Sen. Joe Manchin (D-WV) published an op-ed in the Wall Street Journal announcing that he won’t be voting for the Democrats’ 3.5 trillion-dollar spending plan. With the Senate being split 50-50 between Republicans and Democrats, Manchin’s announcement effectively ends the possibility of the bill being passed.

“The nation faces an unprecedented array of challenges and will inevitably encounter additional crises in the future. Yet some in Congress have a strange belief there is an infinite supply of money to deal with any current or future crisis, and that spending trillions upon trillions will have no negative consequence for the future,” Manchin began. “I disagree.”

Manchin pointed out that the record inflation levels under President Biden’s policies have led to “a costly ‘inflation tax’ on every middle- and working-class American. At $28.7 trillion and growing, the nation’s debt has reached record levels.”

“Over the past 18 months, we’ve spent more than $5 trillion responding to the coronavirus pandemic,” Manchin wrote. “Now Democratic congressional leaders propose to pass the largest single spending bill in history with no regard to rising inflation, crippling debt or the inevitability of future crises. Ignoring the fiscal consequences of our policy choices will create a disastrous future for the next generation of Americans.”

Manchin added, “Those who believe such concerns are overstated should ask themselves: What do we do if the pandemic gets worse under the next viral mutation? What do we do if there is a financial crisis like the one that led to the Great Recession? What if we face a terrorist attack or major international conflict? How will America respond to such crises if we needlessly spend trillions of dollars today?”

Manchin explained that he believes that Congress should be considering the long-term while searching for solutions to current problems. He wrote, “We must allow for a complete reporting and analysis of the implications a multitrillion-dollar bill will have for this generation and the next. Such a strategic pause will allow every member of Congress to use the transparent committee process to debate: What should we fund, and what can we simply not afford?”

“I, for one, won’t support a $3.5 trillion bill, or anywhere near that level of additional spending, without greater clarity about why Congress chooses to ignore the serious effects inflation and debt have on existing government programs. This is even more important now as the Social Security and Medicare Trustees have sounded the alarm that these life-saving programs will be insolvent and benefits could start to be reduced as soon as 2026 for Medicare and 2033, a year earlier than previously projected, for Social Security,” Manchin added.

Manchin wrote,” Inflation continues to rise and is bleeding the value of Americans’ wages and income. More than 10.1 million jobs remain open…. “While my fellow Democrats will disagree, I believe that spending trillions more dollars not only ignores present economic reality but makes it certain that America will be fiscally weakened when it faces a future recession or national emergency.”

Manchin concluded, “For those who will dismiss my unwillingness to support a $3.5 trillion bill as political posturing, I hope they heed the powerful words of Adm. Mike Mullen, a former chairman of the Joint Chiefs of Staff, who called debt the biggest threat to national security. His comments echoed the fear and concern I’ve heard from many economic experts I’ve personally met with.”

In this article:Infrastructure, Joe Manchin