Democrats in Congress are the new patron saints of lost causes. Their impeachment trial in the Senate is beyond desperate because they know that conviction is mathematically impossible.

Senate Majority Leader Chuck Schumer, D-N.Y., conceded as much on Tuesday when he suggested that his colleagues could still censure former President Donald Trump if (he really meant “when”) the Senate fails to reach the threshold 67 votes required to convict.

The arithmetic is a foregone conclusion and Schumer knows it, which is why he’s already thrown in the towel and started chatting up censure as a post-trial retaliation. It is not. Censure has always been a banal and vacuous gesture. A parking ticket carries more gravity. Trump couldn’t care less about a non-binding rebuke from Democrats after enduring four long years of daily reprobation.

The inexorable outcome of the Senate trial set to begin the week of Feb. 8, 2021, was ordained the moment 45 Republicans voted last week to dismiss the case against Trump on the ground that the Senate “lacks jurisdiction over the 45th president because he holds no public office from which he can be removed.” This all but ensured a breezy acquittal.

To their credit, some on the GOP side must have actually read Article II of the Constitution which provides that the “The President” – not a former president who is now a private citizen – “shall be removed from Office on Impeachment and Conviction.”

Yet, Democrats maintain the tortured illusion that a person can be removed from an office he no longer holds. Thankfully, the Framers did not pen the Constitution with disappearing ink. They meant what they wrote and memorialized it in such plain language that a simpleton could absorb it. Of course, this means there are at least 55 senators who are severely challenged when it comes to reading comprehension. Or maybe they just don’t care about that pesky document called the Constitution.

Against this backdrop, the impending impeachment trial in the Senate is little more than a farce. But it was rendered so by House Speaker Nancy Pelosi, D-Calif., and her fellow Democrats who abandoned all semblance of due process by rushing to impeach in the House without holding a single hearing. They denounced Trump for “inciting an insurrection,” but never bothering to present any evidence before casting their predictable votes.

Significantly, there is no plausible evidence to be found anywhere in Trump’s address that supports the definition of incitement.

It was very much like a prosecutor at trial skipping the part about proof and demanding that the jury vote quickly to convict based only on the government’s traducements while the accused and his counsel sit bound and gagged, helpless to mount their able defense.

There is a manifest reason why Pelosi and her confederates chose to deprive Trump of his due process rights – they had no credible and incriminating evidence to present. They knew the full content of Trump’s speech at the national mall on Jan. 6, 2021. He encouraged the crowd “to peacefully and patriotically make your voices heard.” At no point did he advocate violence or destruction of property. The exculpatory evidence is on tape. You can watch it yourself on “YouTube” or any video platform.

Did Trump express his views about the election passionately? Yes, but what political speech does not embrace emotional rhetoric designed to motivate the audience? Take a moment to examine some of Pelosi’s own bombast – courtesy of any search engine. Over the past four years, she has publicly accused Trump of racism, fascism, treason, sedition, bribery and causing mass deaths. Incendiary? Absolutely. Trump’s words on Jan. 6 seem to pale by comparison. 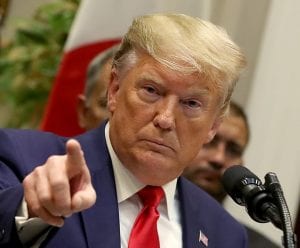 I have repeatedly argued that Trump’s remarks that day were foolhardy and driven by a dogmatic, indeed unfounded, belief that Congress had the authority to reverse the election result. However mistaken his opinion may have been, Trump was entitled to express it just as Democrats did in 2017 when they, too, mounted a campaign to contest the electoral vote in Congress. In America, we call this free speech. It is a protected and cherished right under the First Amendment.

Significantly, there is no plausible evidence to be found anywhere in Trump’s address that supports the definition of incitement. Being wrong in your convictions is neither a crime nor an impeachable offense.

This is where the law lends clarity. In her floor speech on Jan. 13, 2021, shortly before the House voted to impeach, Pelosi posed to her colleagues a carefully crafted rhetorical question as her primary indictment of Trump: “Were his words and insurrectionary mob a high crime and misdemeanor?”

Examine that statement closely. Pelosi cleverly contrived a non-sequitur. She conflated two separate and very different actions to imply that Trump was responsible for what the mob did. The rioters committed crimes, but Trump did not. Pelosi knows this.

Nowhere in his speech did Trump advocate or direct imminent harm, as the law of incitement demands. Moreover, incitement requires proof of the speaker’s specific intent to cause violence. There is no evidence whatsoever that Trump intended for the mob to launch an assault on the Capitol building, breach security, attack police, threaten lawmakers, riot, vandalize, loot and commit rampant criminality. None of those malign acts can be reasonably inferred from his spoken words.

Pelosi’s deceptive question was designed to convict Trump by association (not causation) because she knows there is a paucity of evidence that Trump was the proximate cause of the crimes perpetrated by the mob. This is why Pelosi summarily dispensed with a hearing in the House and its mandated presentment of evidence.

Like the prosecutor who skipped the part about proof, Pelosi ordered a precipitous vote to engineer her sham impeachment. Bereft of conscience, she stripped Trump of the inherent and indispensable right to defend himself.

Pelosi is now demanding that the Senate do what she refused to do – present evidence by calling witnesses. Fine. Let’s hear the testimony of Rep. Alexandria Ocasio-Cortez, D-N.Y., who revealed on Tuesday that she received text messages warning of the expected violence one week before the riots. Really? So, how is it possible for Trump to have incited violence that was planned before he delivered his speech at the Ellipse? That illogic must have escaped AOC when she voted to impeach Trump.

In my last column, I called this a “counterfeit impeachment.” But it’s worse than that. It is an egregious assault on the principle of fundamental fairness that has long been the foundation of our democratic institutions.

How can Americans have trust in a Congress so riven with bias and blinded by hatred that it is willing to contort the meaning of the Constitution to achieve an illegitimate and vindictive end?

Our Founding Fathers – no strangers to corrupt politicians and unjust governments – would be ashamed.