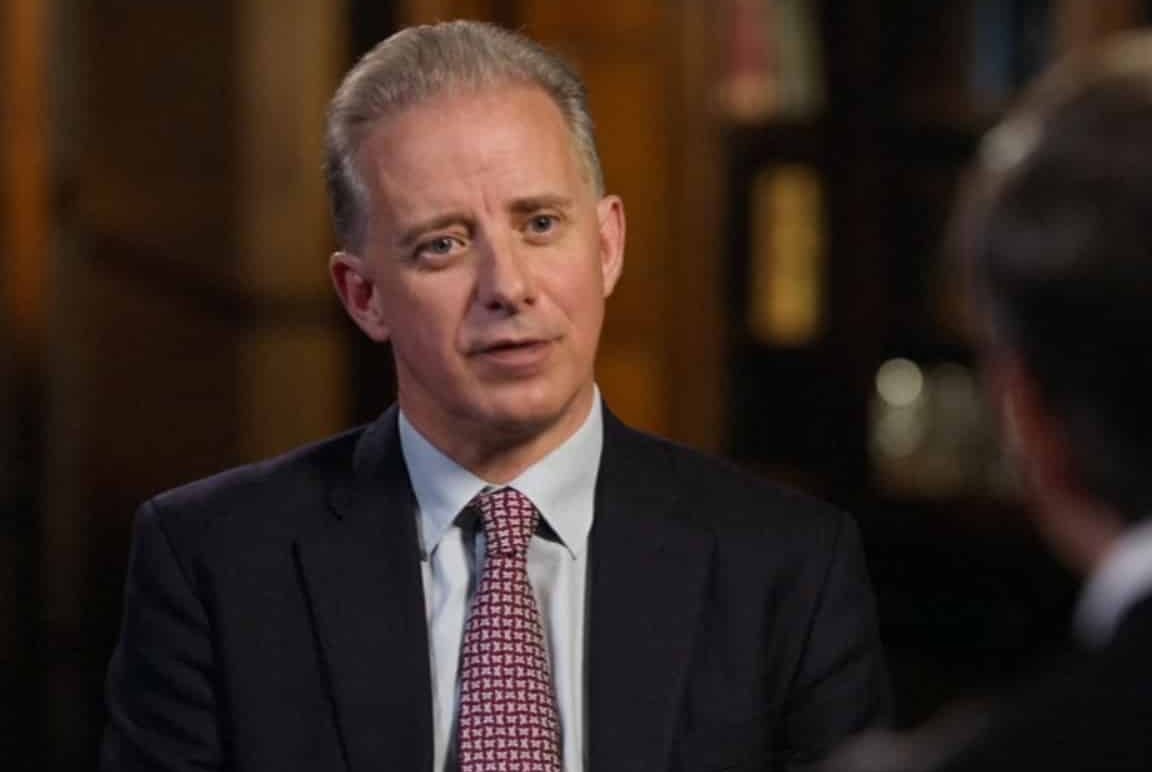 Christopher Steele should print up calling cards embossed with the words, “Liar For Hire.”  He could do splashy commercials bragging that Hillary Clinton is a happily satisfied customer.

The former British spy pocketed buckets of money from the Clinton Campaign and the Democratic National Committee (not to mention cash from the FBI courtesy of you, the American taxpayer) by conjuring up a phony dossier that was used to smear Donald Trump during the 2016 presidential election and trigger an FBI investigation that badly damaged his presidency.

When you think about it, it was one helluva grift.  Until it was exposed.

Now, five years after Steele began spinning his ludicrous lies, he is trying in vain to resuscitate his wrecked reputation by doubling down on the same shameful fables during an interview with ABC’s George Stephanopoulos.  It is no coincidence that his interlocutor was once a chummy adviser to Bill and Hillary Clinton and served as White House Communications Director (chief flack) for the former president.

The semi-friendly venue notwithstanding, Steele managed only to reinforce his disrepute as a serial fabulist and world-class con artist.

This was something the FBI realized, albeit belatedly, in the Fall of 2016 when it fired him as a confidential source because of his audacious deceit.  Shortly thereafter, the bureau tracked down his principle source and thoroughly discredited the dossier as nothing more than a sensational collection of hearsay, innuendo, gossip, and puerile supposition.  It was, in a word, junk.

Unconscionably, James Comey’s FBI kept this a secret from Trump and the American people so that the agency could exploit the dossier as a pretext to maintain and even escalate its unwarranted probe of the new president that they so despised.

Even worse, Comey and his nefarious cohorts deceived federal judges on the Foreign Intelligence Surveillance Court by continuing to insist that Steele was reliable and the dossier was credible so that the FBI’s spying on a Trump associate could go on.

It turns out there was never any grand “collusion” conspiracy that was hatched in the bowels of the Kremlin between Trump and Vladimir Putin to steal the presidential election.  It was all a fantastic hoax originally conceived by Hillary who helped engineer, finance and disseminate the fictitious narrative based largely on Steele’s dirty dossier.

Clinton’s acolytes then worked sedulously to peddle the elaborate fraud to the FBI and the gullible Trump-hating media who acted as witting accessories.  A “witch hunt” was born.

All of this can be found in declassified documents from both the FBI and the CIA, as well as a damning report authored by the Inspector General at the Department of Justice.  And, of course, special counsel Robert Mueller’s 22-month investigation found no evidence of a “collusion” conspiracy, despite his biased team’s spectacular dumpster dive to uncover one.

Steele’s current effort to rehabilitate himself is a fool’s errand by a consummate stooge.  There is no defending the indefensible.  It is impossible to justify or rationalize specious tales that are demonstrably false.

Yet, in the ABC News interview, the ex-spook insisted that his dossier was true and accurate, although he conceded that it might not be “100 percent accurate.”  Really?  How about five percent accurate?  Or less?

The only details in the dossier that proved to be remotely factual were inconsequential events involving no wrongdoing that Steele admittedly trolled from open sources on the internet. Everything else in his dossier was unadulterated rubbish.

For instance, it was certainly true that Trump campaign adviser Carter Page gave a speech at a university in Moscow where Barack Obama had delivered an address years earlier.  Steele likely watched the event online where it was publicly posted.  So what?

It was also true that Trump had once explored the possibility of building a commercial and residential tower in Moscow, but eventually rejected the idea as financially imprudent and overly complicated.  The potential project was not an unusual endeavor for a real estate developer with construction ventures and licensing deals worldwide.  It hardly constituted an odious plot with the Russians to corruptly seize the presidency.

But Steele appropriated these otherwise innocuous facts and morphed them into a breathless “collusion” conspiracy where, for example, Page would get a 19 percent stake in a Russian-controlled oil company in exchange for the prospect of lifting Western sanctions.

It is utterly preposterous to think that Moscow would pay the equivalent of an $11 billion dollar bribe to a volunteer, unpaid adviser who had never even met the candidate.  Steele’s accusation was so screwball it was laughable.

The truly comical centerpiece of Steele’s dossier became the infamous “pee tape.”  It was supposedly collected by Russian intelligence and purportedly showed Trump engaging in lewd acts with prostitutes in a Moscow hotel.  If such a tape actually existed, surely it would have emerged by now, wondered Stephanopoulos during the interview.

In response, Steele insisted that the tape “probably does” exist, but he “wouldn’t put 100 percent certainty on it.”  His reasoning (if you can call it that) is that the Russians didn’t “need” to release the tape because “they got pretty good value out of Donald Trump when he was president.”  Cue the laugh track.

Value?  As president, Trump slapped more punishing sanctions on Russia during his first 18 months in office than Barack Obama did in eight years.  However, that tidbit of relevant information was conveniently left out of the televised conversation as Steele’s risible contention went unchallenged.

But Stephanopoulos gets some minor credit for informing viewers that Steele’s primary source for the dossier readily confessed to the FBI that nearly all of its content was the product of embellished gossip from the source’s drinking pals, although the anchor was rather vague on the details.

Here are the specifics contained in a declassified 56-page report on what the FBI discovered. Steele’s sources were not “Kremlin insiders” as he represented.  Instead, the information came from a single source who was a research analyst for the Washington D.C. liberal think tank, Brookings Institution, which had close ties to Hillary Clinton.  Naturally.

The source’s identity is redacted in the report, but he was later identified as Igor Danchenko, a Ukranian-born resident of the United States.  Beginning a mere four days after Trump was inaugurated in January of 2017, FBI agents interviewed him during three successive sessions.

Danchenko explained that Steele paid him to dig up dirt on Trump and that he “felt like he had to report something back to Steele” to justify the monthly salary he was receiving.  In order to keep the paychecks coming, the analyst trafficked in rank rumors from “random associates” and barroom buddies with whom he would “drink heavily.”  Facts and truth were irrelevant.  The “pee tape” was the clever product of a crony’s rich imagination and derived from a comment likely “made in jest.”

Steele knew all of this, but was determined to present these fabulous fairy tales as factual in his dossier.  Meanwhile, Comey and his confederates at the FBI concealed all of the lies they had unraveled and continued to exploit Steele’s apocryphal document in order to pursue their illegitimate and unlawful case against Trump.  In the process, they defrauded the FISA Court.

Steele has had five years to dream up a plausible response.  Yet, all he could offer were vacuous explanations that no simpleton would believe.  In the ABC interview, he had the temerity to assert that there is little evidence to contradict his dossier, ignoring the FBI report that completely debunked every major allegation he leveled.

Amazingly, Steele still insists that Trump’s personal attorney Michael Cohen met secretly with Russians in Prague.  It’s a story that was easily disproved by the FBI and adamantly denied by Cohen during his congressional testimony when he turned against Trump before he was hauled off to prison.

Cohen, who now has no reason to protect his former boss, facetiously told ABC News:

“I’m pleased to see my old friend Christopher Steele, a/k/a Austin Powers, has crawled out of the pub long enough to make up a few more stories.  I eagerly await his next dossier which proves the existence of Bigfoot, the Loch Ness monster and that Elvis is alive.”

So there you have it.  Together with Hillary Clinton, Steele managed to perpetrate the greatest mass delusion in political history.  The dynamic duo invented and propagated a vile lie that held a presidency hostage and sent American government and politics spiraling into chaos.

And yet, Steele still maintains the veneer of righteousness in the face of his obvious malevolence.  “I stand by the work we did, the sources we had, and the professionalism which we applied to it,” he stated.

Only a skilled “liar for hire” could furnish such a fanciful claim.

In this article:Christopher Steele, Russia Hoax