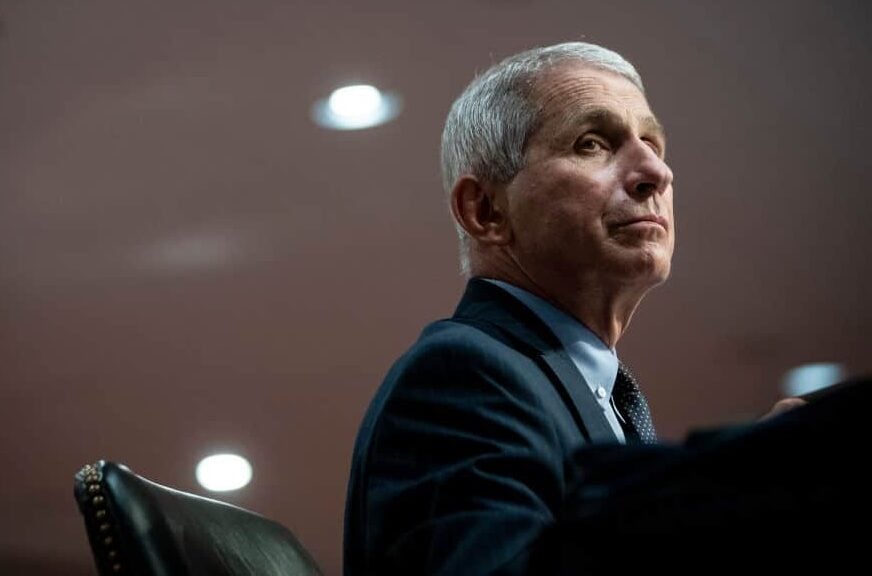 A criminal investigation should be opened into whether Dr. Anthony Fauci lied to Congress when he denied that his agency helped fund dangerous experiments in a Wuhan laboratory that might have caused the COVID-19 pandemic that killed more than 3.5 million people worldwide.

Fauci is medical adviser to the president and the director of the National Institute of Allergy and Infectious Diseases, an agency within the National Institutes of Health (NIH). He insisted repeatedly during his Senate testimony on May 11, 2021, that the roughly $600,000 in taxpayer money that the NIH funneled through a third party to the Wuhan Institute of Virology in China was never used to support risky experiments – called gain-of-function research – to genetically enhance the pathogenic power of bat coronaviruses that infect humans.

“The NIH has not ever and does not now fund gain-of-function research in the Wuhan Institute,” he told a disbelieving Sen. Rand Paul, R-Ky.

Afterward, Sen. Paul declared that Fauci had lied. That was before BuzzFeed News revealed a trove of Fauci’s emails through a Freedom of Information Act request. The communications cast doubt on Fauci’s veracity during the Senate hearing. Upon reading them, Sen. Paul doubled down on his accusation by stating, “Fauci has been lying.”

The newly unearthed emails show that Fauci was warned at the outset of the pandemic in late January of 2020 that the COVID-19 virus contained “unusual features” that “(potentially) look engineered” inside a laboratory. Unique genetic sequences not found in nature indicated that scientists might have manipulated cells to make the virus more virulent and contagious. Such gain-of-function experiments could have transformed the virus into a lethal “superbug” that then escaped from the lab and ravaged the world.

Instead of disclosing that critical information to the public, Fauci did the opposite. He trashed the idea as a crazy conspiracy, even as his own emails suggest that he seemed worried about a deadly man-made pandemic that leaked from the lab. One pivotal message is inexplicably redacted. Why?

Fauci’s determination to downplay this credible lab leak theory smacks of a cover-up designed to hide incriminating evidence of his agency’s complicity in financing the Wuhan project. But the emails are not the only damning evidence against Fauci.

At a conference as far back as 2012, Fauci described gain-of-function as “reverse genetics,” which he had energetically endorsed despite its known hazards. Indeed, the NIH money that made its way to the Wuhan lab was specifically designated for “reverse genetics,” according to the written grant. This is compelling evidence that Fauci was not truthful when he testified that the NIH did not fund gain-of-function research.

Intentionally lying while under oath to Congress about a material matter constitutes the felony of perjury (18 U.S.C. 1621). The giving of knowingly false and misleading statements during testimony (18 U.S.C. 1001) is an equivalent crime regardless of whether the person is under oath. Both offenses result in the same punishment of up to five years behind bars upon conviction.

There is more than sufficient evidence to justify an investigation by the Department of Justice into whether Fauci gave deliberately deceptive or false testimony when he appeared before a Senate committee. Additionally, Congress has the authority to conduct its own investigation to determine whether Fauci lied at the legislative hearing.

Beyond Fauci’s potential criminal culpability, there are civil actions at law that come into play. His suspected conduct and the decisions by the NIH could precipitate an explosion of litigation involving wrongful death lawsuits, negligence cases for pain and suffering, and a myriad of claims over financial losses when global economies ground to a halt. This is precisely why a comprehensive investigation into what caused the original COVID-19 transmissions is vital.

It is axiomatic that China would be primarily to blame if a lab leak in Wuhan triggered the pandemic.  American citizens and businesses, as well as states like Mississippi and Missouri, filed the first lawsuits against China in U.S. federal courts more than a year ago. They allege that an “appalling” campaign of “deceit, concealment, misfeasance, and inaction by Chinese authorities unleashed this pandemic.”

As legitimate as these civil actions for money damages may be on their merits, the plaintiffs are facing long odds in achieving judgments because China is largely protected from being sued in U.S. courts by the Foreign Sovereign Immunities Act of 1976. There have been some notable exceptions where citizens have successfully sued foreign governments. But it would probably take an act of Congress to fully open up the American legal system to allow millions of virus victims to sue China and attempt to collect on any damage awards.

A more viable and logical course of action for plaintiffs is to sue the U.S. government if it can be proved that the coronavirus escaped from the Wuhan laboratory and that Fauci and the NIH helped cause or contribute to the pandemic by funding dangerous gain-of-function experiments inside the lab that triggered the virus spread. This likely explains the Biden administration’s reluctance to embrace a sweeping investigation that might uncover inconvenient truths.

It is a popular misconception that Fauci and the NIH have absolute government immunity. Decades ago, Congress waived its broad immunity by passing the Federal Tort Claims Act allowing injured parties to sue the government for the misfeasance committed by federal employees and agencies.

So, for example, the United States could be liable in tort for personal injuries, death or property damage (business loses) if they were caused in part by the negligent or wrongful acts or omissions of Fauci and the NIH acting within the scope of their duties or in the course of carrying out government functions. Moreover, if Fauci and others willfully circumvented the U.S. government’s moratorium on gain-of-function research and the restrictions imposed thereafter, this could constitute even more evidence of wrongdoing.

Given the disastrous nature of the pandemic, damages would amount to trillions of dollars. Is it any wonder that Fauci worked furiously to tamp down any talk of the lab leak theory and, instead, sought to blame the contagion on a natural transmission in the environment? Perhaps he feared he would be directly implicated in what could turn out to be the worse man-made catastrophe in world history. Lives and livelihoods everywhere were ruined.

At the very moment, Fauci was being given persuasive genetic information that lab experiments in Wuhan appeared to have gone horribly wrong, he publicly derided the idea. At a White House briefing more than a year ago he stated, “If you look at the evolution of the virus in bats and what’s out there now, (the scientific evidence) is very, very strongly leaning toward this could not have been artificially or deliberately manipulated… Everything about the stepwise evolution over time strongly indicates that (this virus) evolved in nature and then jumped species.”

At the time he uttered those words, Fauci had no scientific basis to level such an assertion. None. Fourteen months later, there is still zero evidence that the virus emerged naturally. Thousands of tests have failed to locate the infected bat population or identify an animal host. It seems increasingly likely that no genesis transmission in nature has been located because none ever existed.

What did exist was a controversial laboratory in Wuhan known for its shoddy safety protocols conducting risky experiments designed to genetically supercharge viruses to attack humans. The first reported cases happened in or around the lab itself. The Wall Street Journal reported that newly disclosed U.S. intelligence reveals that three researchers at the Wuhan lab became seriously ill in November of 2019 and had to be hospitalized for treatment of symptoms consistent with COVID-19. This is significant circumstantial evidence that the epicenter of the pandemic could well have been the Wuhan lab.

Although scientific evidence seems to support the hypothesis that the virus was hatched in a laboratory, the origin of the outbreak is not known for sure. Hence, it is imperative that an independent commission be established by Congress to investigate what happened, as the New York Post has urged. It must be objective, transparent and thorough. Appointed members composed of scientists, doctors, researchers and intelligence experts must coalesce around one universal goal – to search for the truth whatever it might be.

Fauci’s dubious role in all of this should be included in the investigation. If he sought to manipulate public opinion to undermine the truth and lied to or misled Congress in the process, he should be held legally accountable. If he and the NIH helped commission dangerous experiments gone awry, their misfeasance will have exposed the U.S. government and taxpayers to even more financial harm than the pandemic has already wrought. But this is the cost of truth.

There is growing suspicion that Fauci is not at all the saintly figure portrayed by the biased and gullible mainstream media. Some now wonder whether he is mendacious or incompetent.

I’m betting he is both.