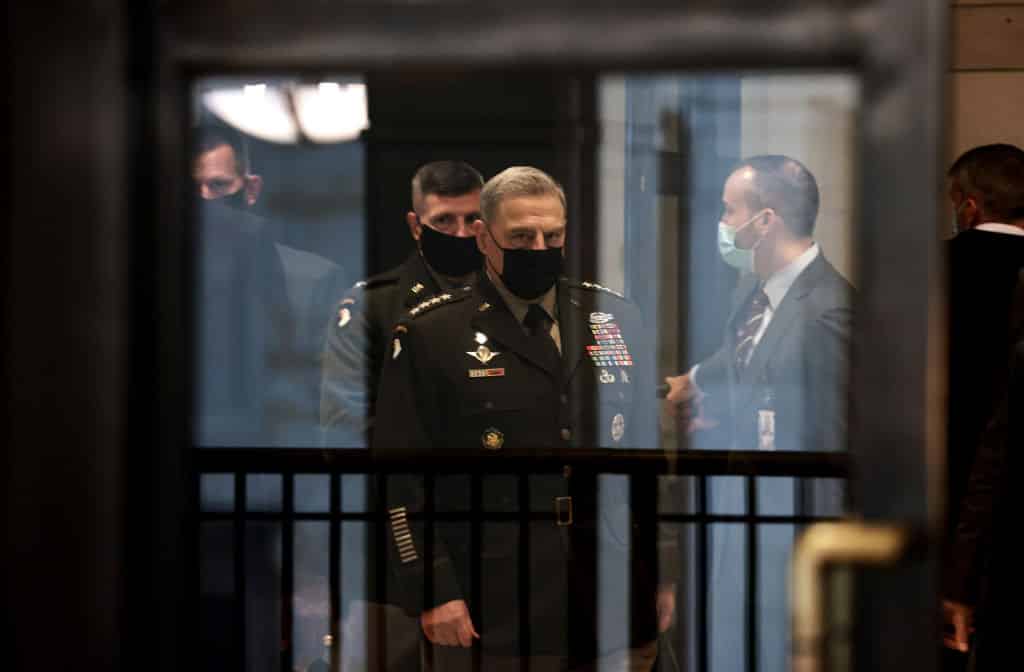 Revelations about the conduct of Gen. Mark Milley, Chairman of the Joint Chiefs of Staff, contained in a new book are beyond alarming.  If accurate, they constitute court martial offenses.  If proven at trial, they merit conviction and imprisonment.

According to the book, Milley usurped the authority of the president as the elected civilian leader of the United States, sought to defy any order with which he disagreed, and inserted himself into a chain of command where he did not belong in order to arrogate power over the nation’s military operations and nuclear codes.  But that’s not all.

The authors contend that Milley secretly informed China that he would warn them in advance of any attack by U.S. military forces.  Pentagon sources have admitted that Milley made the calls to the Chinese, as Fox News reported.  But they insist that the general assured China that there would be no surprise attacks. It is a distinction with very little difference.

Given the gravity of these accusations and the corresponding national security threat they posed, Milley should be immediately suspended from all military duty —including his position as Chairman of the Joint Chiefs of Staff— pending a thorough investigation.  If there exists credible evidence to support the claims against him, he must face a court martial by military tribunal to answer for his perfidy.

Two days after the January 6, 2021 attack on the Capitol, Milley spoke by telephone with House Speaker Pelosi.  In a transcript of the call obtained by the authors, Pelosi demanded that the general wrest control of the nuclear codes from Trump by instituting precautions and otherwise prevent him from taking any adverse military action.  Milley offered his resolute assurances to the speaker.

Shortly thereafter, Milley convened a covert meeting with senior Pentagon officials, including the chain of command for the nation’s nuclear arsenal.  Asserting unfettered power that he did not have, the general instructed them that no one was to act on any orders for military strikes —even from President Trump— unless he, Milley, was personally involved and approved.  He insisted that everyone in the room verbally commit to effectively place him in charge.

As Chairman of the Joint Chiefs, Milley serves only as an adviser to the president.  That is all.  His position is not within the chain of command overseeing the codes that control U.S. nuclear weapons.  Indeed, by law he is prohibited by from having any operational command authority over America’s armed forces.  As such, his actions as described in the book were both treacherous and lawless.

Under Article 94 of the Uniform Code of Military Justice (UCMJ), a person is guilty of sedition if he acts “with intent to cause the overthrow or destruction of lawful civil authority.”  Usurping the power of the president as commander-in-chief and undermining his constitutional authority are grounds for a court martial.  Actively subverting or defying the elected, civilian control of the military is nothing more than a hijacking of our government by an advisor who thinks he can do so because he happens to have four stars resting on his shoulders.

After ordering Pentagon officials to bypass President Trump and undertake no military incursions without first seeking his assent, Milley telephoned his counterpart in China.  “Peril” describes how he reassured Gen Li Zuocheng that the U.S. would not initiate any type of attack amid American military exercises in the South China Sea.

This was preceded by a call that Milley made to Li on October 30, 2020, four days before the presidential election.  During that conversation, Woodward and Costa allege that Milley promised he would warn the Chinese Communist Party in advance if the president were to launch an attack against the country.

“We are not going to attack or conduct any kinetic operations against you,” said Milley, according to a book excerpt.  He added, “General Li, you and I have known each other for five years.  If we’re going to attack, I’m going to call you ahead of time.  It’s not going to be a surprise.”

Bear in mind that there is no evidence that Trump ever contemplated such an attack, and he has said as much.  Regardless, tipping off an enemy about a planned strike would not only allow opposing forces to prepare a potent defense but it would also enable them to mount a devastating preemptive attack against the U.S.

Under Article 103b of the UCMJ, a person is guilty of aiding the enemy by providing intelligence or military information to the enemy without authority.  Milley’s communications with Li were allegedly made in secret and without President Trump’s knowledge or consent.

Conveying highly privileged military information, vital intelligence, or war plans to a foreign adversary might also constitute the crime of espionage under Article 103a of the UCMJ.  This point was made by Sen. Marco Rubio in a letter to President Biden in which he demanded that Milley be fired.  “I do not need to tell you the dangers posed by senior military officers leaking classified information on U.S. military operations,” he wrote.

No amount of rationalization can possibly justify an advisory general’s seizure of the reins of power from an elected president so that he could wield it himself as he saw fit.  It doesn’t matter whether he had convinced himself that he was acting in the best interest of the American people.  It was not his judgment to make.  In a word, it’s irrelevant.

The book portrays Milley as concerned, if not paranoid, that Trump would engage in armed hostilities and somehow attempt a coup while contesting the election results.  The general’s dishonorable solution was to mount a coup of his own against the president.

As the authors of “Peril” put it, “Milley was overseeing the mobilization of America’s national security state without the knowledge of the American people or the rest of the world.”  That is not how democracy works in our constitutional republic.

Under our system of military justice, Milley must be held accountable.  If the evidence merits a court martial, he should be tried.  If crimes were committed, he will be convicted and sentenced.

These are the inexorable consequences when men entrusted with power betray that sacred trust.