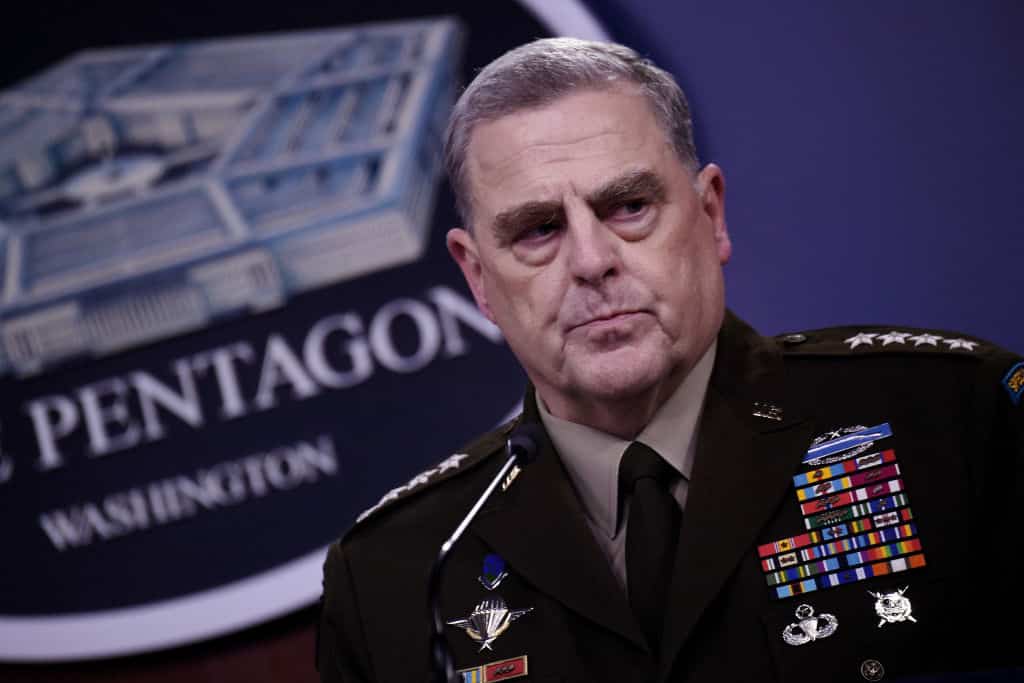 US Chairman of the Joint Chiefs of Staff General Mark Milley

Gen. Mark Milley is a dangerous man.  As Chairman of the Joint Chiefs of Staff, he is a continuing threat to democracy, the Constitution, and our country’s national security.

Milley operates under the delusion that he is in charge of the U.S. military and its nuclear codes —not the commander-in-chief— and that he alone can decide whether the president is so “unstable” that he, Milley, will assume command of everything.

Forget about the man who sits behind the desk in the Oval Office who was elected to that lofty position by the American people.  Milley sees himself as the nation’s de facto leader —our dictator in waiting.

During the waning days of the Trump Presidency, Milley hijacked our government.  He allegedly inserted himself into the chain of command, conspired with House Speaker Nancy Pelosi to wrest control of our nuclear arsenal, instructed Pentagon officials to ignore any orders for military action unless he personally approved them, and vowed to warn the Chinese in advance of any surprise attack.

The details are contained in an alarming new book by Bob Woodward and Robert Costa.  It is based on more than 200 interviews with firsthand participants and witnesses, meeting notes, documents, diaries, emails and calendars, as well as verbatim transcripts of conversations involving Milley.

If the revelations are true and accurate, Milley should face a general court martial on charges of usurping the authority of the president (otherwise known as sedition in the Uniform Code of Military Justice), aiding the enemy by providing advance intelligence without authority, and possible espionage for conveying vital military information and war plans to a foreign adversary.

Despite increasing calls for Milley to be fired (or, at the very least, relieved of duty pending a thorough investigation), President Biden insists he has “confidence” in the imperious general.

Big mistake Joe.  You’re setting yourself up for a coup with a wolf scratching at the door.

At what point in time will Milley do it again?  Will he decide in the near future that Biden is mentally deficient?  Will he once again use it as a pretext to seize the reins of power?

Not much is at stake.  Just our constitutional republic and the principle that the elected civilian leadership controls both our government and its armed forces, not a rogue general with an ego as big as all outdoors.

Milley is exactly what our Founders feared above all else.  He embodies their ultimate nightmare.