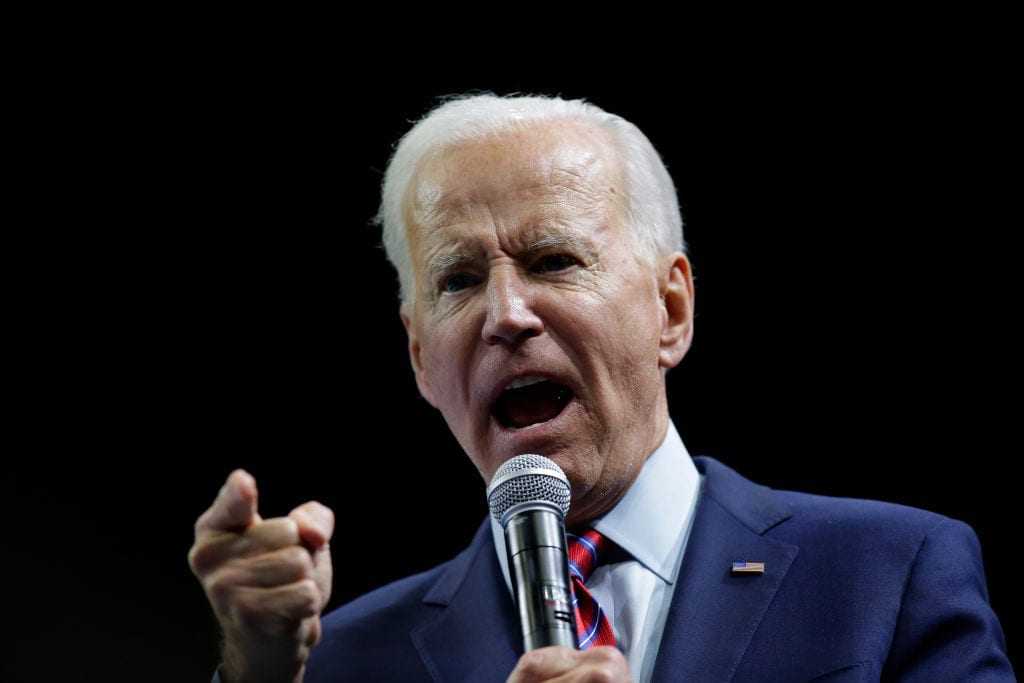 Democrats are determined to pursue their fanciful impeachment of President Trump based on an imaginary “quid pro quo.” Rep. Schiff and others have even suggested that even if there was no  “quid pro quo,” the Ukraine call could still be grounds for impeachment.

There is, of course, no evidence of a “quid pro quo” in President Trump’s telephone conversation with Ukrainian President Volodymyr Zelensky on July 25, 2019.  The transcript of the call shows no pressure, no condition, and no demand for anything. This is corroborated by the statements of Zelensky who confirmed that there was no blackmail involved during the call and no pressure applied.  “Nobody pushed me,” Zelensky said.  We had a great phone call,” he added.  “It was normal.”

Ironically, there is evidence of a clear “quid pro quo” in Joe Biden’s threat to the Ukrainian government when he was Vice President and served as the point-person on Ukraine.  At a public forum, Biden is seen bragging on camera that he warned the Kiev government in early 2016 that he would withhold $1 billion in American aide unless a Ukrainian prosecutor, Viktor Shokin, was fired.  Shokin has said in interviews that he was sacked because his investigators were “on his (Hunter Biden’s) tail” in a case of suspected corruption involving Burisma where the V-P’s son held a board seat for which he was not remotely qualified.

Joe Biden’s boast about his “quid pro quo” is compelling evidence that he may have used his public office to confer a benefit ($1 billion) in exchange for something of value –shutting down an investigation to help his son.

Yet, Democrats and the media would have you believe that Trump’s non-existent “quid pro quo” is an impeachable offense which demands his removal from office, whereas Biden’s “quid pro quo” is perfectly acceptable.  It is not. Here’s why Congress and the Department of Justice should investigate Biden’s actions.

Foreign Corrupt Practices Act (15 USC 78dd-1):  Passed in 1977 and later amended, this law criminalizes foreign bribery.  It is illegal for a U.S. person to coerce or influence, through bribery or extortion, a foreign nation into taking action that might financially benefit that person, his family or business.   If it can be shown that Biden, as V-P, used his public office to influence or coerce a foreign official into taking official action that benefited Biden’s son, then this would be a violation. Much depends on Biden’s intent.  In his defense, he would have to demonstrate that his intent had nothing to do with Ukraine’s investigation of Hunter Biden’s company, Burisma. However, the fired prosecutor is on record stating that Biden’s threat to withhold $1 billion in U.S. aid was motivated by, or related to, his investigation of Burisma.

Bribery (18 USC 201(b)):  Whoever corruptly gives, offers or promises anything of value to a public official to influence an official act his guilty of bribery.  The government must show there was a corrupt intent to obtain a quid pro quo, although it may be implied, not explicit or expressed.

Gratuities (18 USC 201(c)):  Giving, offering or promising anything of value to a public official in exchange for any official act is a violation of the gratuities statute.  It is similar to bribery, although it does not require proof of a quid pro quo or corrupt intent.

Hobbs Act Extortion (18 USC 1951):  A threat to a foreign official in order to obtain an official benefit affecting interstate or foreign commerce would constitute extortion under the Hobbs Act.

Hunter Biden’s lucrative position on a Ukrainian natural gas company’s board, for which he had no experience or qualification, smacks of influence peddling and self-dealing.  However, proving it would be exceedingly difficult.

Prosecutors would have to show evidence of a scheme or agreement in which Hunter promised to utilize the power of his father’s public office to provide protection for Burisma from corruption investigations and/or prosecutions and that such a scheme was accomplished with his father’s active participation. John Solomon released memos obtained through a Freedom of Information Act lawsuit show a series of email exchanges detailing how Burisma representative used Hunter Biden’s name as a reason the State Department should help resolve corruption allegations. While this may have been Burisma’s intent by placing Hunter on the board, it would take strong direct evidence to show that Hunter engineered and carried out the scheme for that purpose.

Unfortunately, it is all too common for foreign corporations to hire relatives of powerful U.S. officials.  In so doing, they hope that this will help them gain access to those officials or otherwise provide some protection from investigations into potential wrongdoing.  Greedy relatives frequently try to leverage their connection to powerful American government officials. That, by itself, is not a crime. It is only criminal where it can be shown that the public official misuses his office to confer a benefit on that foreign business which, in turn, benefits the relative.  Bribery or an exchange of favors would have to be proven.

In the absence of stronger anti-corruption laws, new financial disclosure laws need to be enacted that would require detailed disclosure of foreign money earned by immediate family members of U.S. public officials.