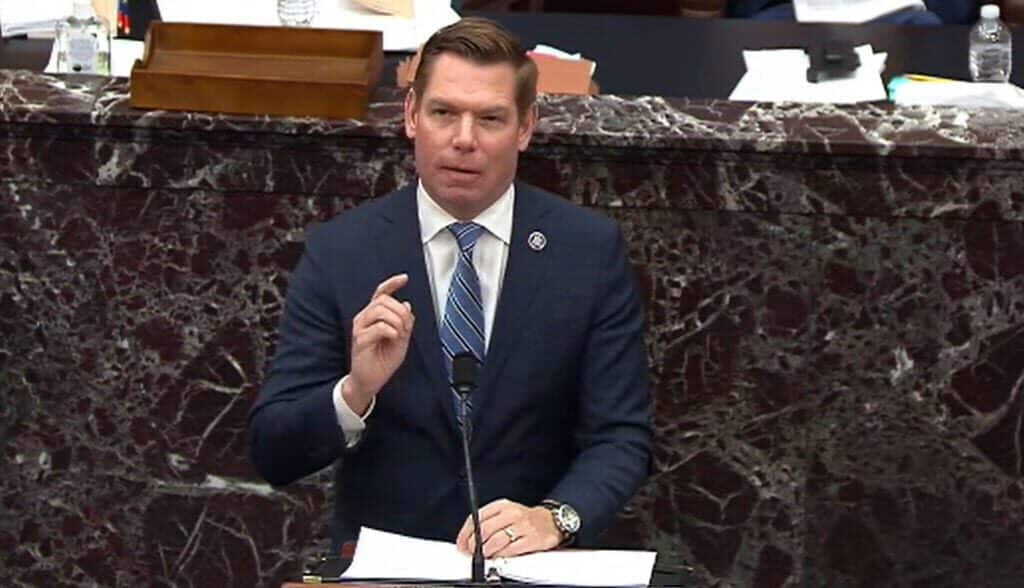 In the second day of the impeachment trial of former President Donald Trump, Senators heard exclusively from Democrat House Managers who spewed incendiary rhetoric to make their case for incitement.  The irony should be lost on no one.

Rep. Eric Swalwell (D-CA) claimed that Trump “lit the match” of violence and “doused the flames with kerosine.”  All that was missing from the congressman’s presentation was a Photoshopped image of a smoldering Capitol Building with Trump holding a used matchbook.  But maybe I dozed off.

Swalwell argued that Trump’s use of the figurative term “fight” really meant a violent “call to arms.”  In Swalwell’s twisted world, Trump’s tweet that “history will remember” was secret code for “combat.”

Who knew that allegory could be grounds for impeachment?  (Somebody better urge Al Gore to apologize for his old campaign theme,“I Will Fight For You,” before he gets belatedly impeached.)

The most baffling moment came when Swalwell played a clip of peaceful protesters chanting “stop the steal” outside an election official’s home in Michigan and then described it as “escalating violence!”  Wait…what?

Rep. Stacy Plaskett (D-USVI) accused Trump of being a “white supremacist” and a chartered member of the extremist group, “The Proud Boys.”  Her supposed evidence was laughably lame, but that’s good enough for conviction, right?  Racist smears are always a guaranteed winner in any political venue.

Rep. Madeleine Dean (D-PA) played every single clip of Trump encouraging the crowd on January 6, 2021 to march to the Capitol.  Except she neglected to play the only clip that truly mattered —when Trump instructed his supporters to be “peaceful” while making their “voices heard.”  Somehow, that exculpatory evidence didn’t make the cut.  Hmmm…a curious omission.

There was a persistent and deliberate theme presented by Democrats on Wednesday: Trump should be convicted because he was wrong when he declared publicly on several occasions that he actually won the election.  Rep. Joaquin Castro (D-TX) displayed a collection of tweets and videos in which the then-president asserted that the election was rigged or stolen.

But what Castro and his colleagues have conveniently overlooked is that in America we have a right to be wrong.  We have a right to express mistaken beliefs.  We don’t forbid foolish opinions or banish misguided convictions.

Public discourse on issues of interest is advanced by more speech, not less.  In America, we do not ban or censor or criminalize disagreeable speech.  Even hate speech is legally protected under the First Amendment.

Yet, Democrats now forsake what they have long supported.  Superficially, they seek to punish Trump for what they regard as reckless political rhetoric with which they disagree.  In truth, they want to punish Trump because they hate him.

Wednesday’s presentation by House Managers exposed a fatal flaw in their case against Trump.  They did not actually present evidence to prove the charge of “incitement of insurrection.”  Beyond hyperbole willfully misconstrued, Democrats have yet to show one instance in which Trump advocated or directed specific acts of violence, as the law of incitement demands.

The case against Trump isn’t just weak, it’s nonexistent.  Former federal prosecutor Andrew McCarthy underscored this very point when he remarked, “If this were a real trial, you’d have to prove a real case of incitement, and they can’t do that because it wasn’t incitement.”

And that is the core problem.  Impeachment is an inherently political exercise masquerading as a legal one.  This enabled House Speaker Nancy Pelosi to deprive Trump of his fundamental right to due process.  There was no hearing, no evidence, and no opportunity for Trump to defend himself.  He was impeached by fiat.

The ensuing trial in the Senate is no better.  There are no rules of evidence, no real standard of proof, and no adherence to law or justice.  Incitement can mean anything Democrats want it to mean, even if it bears no resemblance to the law of incitement.

Cleverly edited videos and cherry-picked tweets that would never be permitted in a court of law are fair game in the Senate trial.  Sure, Trump’s lawyers could object…but to whom?  Sen. Patrick Leahy (D-VT) who is presiding over the trial?  On the day Trump was impeached Leahy pronounced him guilty of inciting violence.

You know it’s a kangaroo court when the so-called “judge” is also a juror who has declared his vote to convict before the trial has even begun. A gavel in his hand makes a mockery of neutral justice.

Fairness in an impeachment trial?  What a quaint, almost whimsical notion.