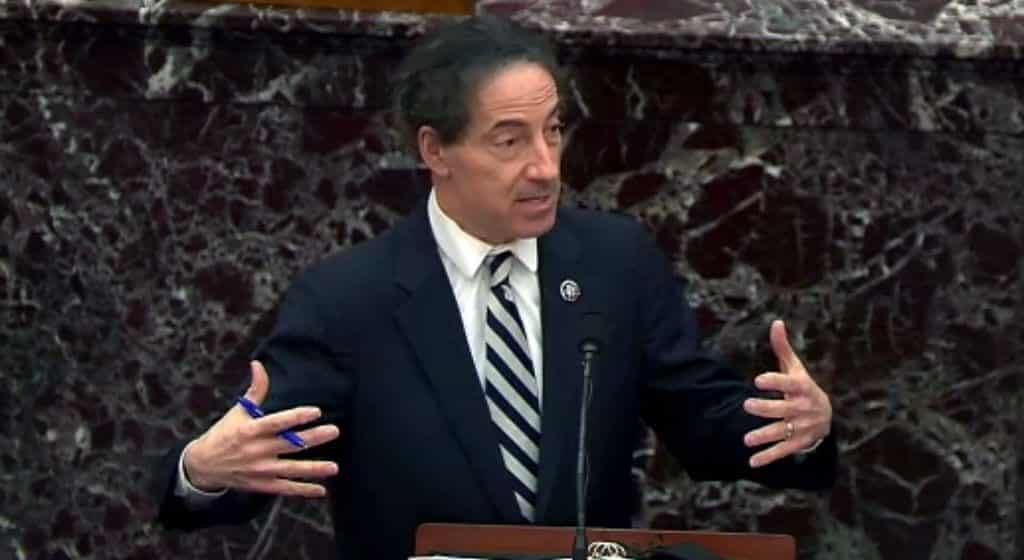 Operating under the theory that no dead horse should be left unbeaten, Democrats in the impeachment trial of Donald Trump flogged the same hackneyed arguments they made during the first two days.  Senators must have been reaching for the NoDoz.

They were forced to endure more of the same videos of rioters, more of the same screenshots of tweets, and more of the same inflated accusations that the former president is a threat to democracy.  If redundancy could be bottled and sold, the House Managers would be filthy rich.

As he has repeated ad nauseam over three long days, lead manager Rep. Jamie Raskin (D-MD) pronounced Trump guilty of “inciting an insurrection” because he employed the common political phrase “fight like hell” when he spoke to a crowd of supporters on January 6, 2021.  Over and over again, Raskin resurrected the phrase while deliberately ignoring the fact that Trump urged protesters to behave “peacefully.”

And no one ever accused three other Democrat managers (Reps. Swalwell, Neguse, and Lieu) of inciting violence when they, too, used “fight” or “fight like hell” as a hyperbolic tool in a war of words.  They were never accused because they never intended violence.

Incitement requires the “specific intent” to cause harm.  It’s known as an inchoate offense where violence doesn’t have to actually occur, only the intent to cause it.

But where is the evidence that Trump intended for demonstrators to breach security at the Capitol Building, attack police, threaten lawmakers, and destroy property?  It cannot be found anywhere in his words that day.  Watch the speech.  You can access it on YouTube or other media platforms.  It is bereft of any reference to violence.  Just the opposite.  Trump told the crowd to act “peacefully” in making their “voices heard” in support of Republicans in Congress who were contesting the election result.

Four years ago, Raskin pulled the exact same parliamentary maneuver.  As a member of Congress, he contested the electoral vote and the seating of Donald Trump as the next president.  Raskin’s rank hypocrisy is glaring.  And his manipulation of the evidence was devious.  He cleverly edited video of Trump’s speech so that it purposefully excluded Trump’s exculpatory words.  This was dishonest, but not unexpected.

In a moment of uncommon candor, Raskin conceded that Democrats did not meet the legal standard of incitement required under the law, but didn’t have to.  “Because this is an impeachment,” he explained.  In other words, the Senate can do whatever it wants to do, even forsake established legal principles if they fancy it.

Raskin’s rationalization is misguided.  Both the law and the Constitution (“High Crimes and Misdemeanors”) provide an important framework for impeachment trials.  Jonathan Turley, a constitution law professor who has defended impeachment charges, correctly observed, “You don’t just discard legal principles.  And there’s been no effort by Democrats to present a concrete case of incitement.”  But Raskin and his confederates think that calling something “incitement” somehow makes it so.

Much of the nonsense that was presented by House Managers on Thursday was irrelevant, immaterial, hearsay, speculation, and prejudicial smears.  Almost none of it would ever be admissible in a real court of law.  And Senators likely know it.  Many of them are trained in the law.  They know rubbish when they see it.  What possible relevancy does a speech that Trump delivered back in 2015 have on an event that took place 6 years later?  The answer is none.  Yet, Democrats played the videotape.  And many other similar clips.

It is abundantly clear that Democrats wanted to impeach Trump because they loathe him and fear him.  So, they invented a fraudulent case of incitement with no hope of conviction to damage him and the Republican Party.  Their desperation was palpable on Thursday as they brought their case to a close.

Under our system of laws and justice, we do not blame someone or hold them legally culpable when another person engages in undirected and independent criminal acts.

They played clips of protesters at the Capitol Building on January 6th.  One woman who flew into Washington for the rally was heard to say, “We came to D.C. because Trump asked us to come.”  Another said, “Trump wants us here.”  With that, Rep. Diana DeGette (D-CO) exclaimed, “So you see, these people understood that Trump wanted them here.”  From there, she jumped to the erroneous conclusion that the president must have advocated violence because violence occurred.  This was tortured logic.

What DeGette and her colleagues cannot seem to fathom is that it doesn’t matter how a listener perceives a speaker’s words in a case of incitement.  It is what the speaker says and intends that matters.  Again, there is not a scintilla of evidence that Trump encouraged or advocated imminent harm.

Under our system of laws and justice, we do not blame someone or hold them legally culpable when another person engages in undirected and independent criminal acts.  This is fundamental.  The examples are numerous.

In 2017 at a rally in Chicago, Sen. Bernie Sanders (D-VT) raged against Republicans and demanded a political revolution as thousands of his supporters roared their approval.  “Knock the crap out them!” Sanders yelled.  Days later, an ardent Sanders supporter and a volunteer for his campaign opened fire on a group of Republicans, wounding four people and seriously injuring Republican House whip Steve Scalise.  Was Sanders to blame?  Did his provocative words incite the violent attack?  Of course not.  And no reasonable person would make such a demented argument.

Was Sen. Chuck Schumer (D-NY), who is now Majority Leader, to blame for a mob of abortion activists who attacked the Supreme Court building immediately after he stood on the steps and allegedly threatened two Associate Justices in an unhinged rant?  Hardly.

Was House Speaker Nancy Pelosi (D-CA) to blame for the escalating anarchist violence last summer when she seemed to imply tolerance, if not approval, with the retort, “People will do what they do”?  No.

Or consider the incendiary words uttered by Democrats like Sen. Cory Booker (D-NJ) and Rep. Maxine Waters (D-CA) that have been well documented.  Are they guilty of intending to incite violence against Republicans, even though no real harm ensued?  Not a chance.  It is unreasonable.

But in the age of Trump, standards of reasonableness have vanished.  Trump is to blame for everything. The hard but obvious truth is that the people who committed violence and destruction at our nation’s Capitol Building are the only ones to blame for their grotesque and despicable acts.  There will always be people crazed with anger.

Blaming Trump is absurd.  Impeaching him is disgraceful.  The rabid Trump-haters in Congress should be ashamed.