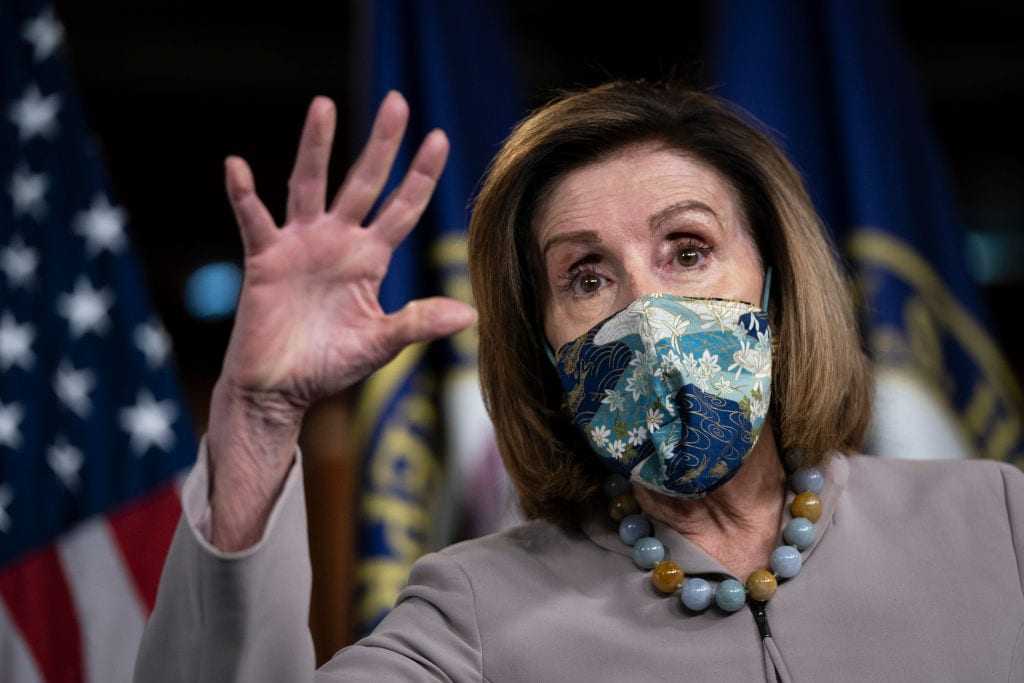 Here we go again.  House Speaker Nancy Pelosi slowly and somberly walking an article of impeachment through the Capitol flanked by House managers giving their best impression of a funeral procession.  Except this time, they’re wearing Covid masks.

Let’s call it “Impeachment: The Sequel.”  It is destined to be as pitiable as the original.  Like a cheap movie franchise that Hollywood keeps exploiting, this sham version will be the equivalent of a box office dud.

Mugging for the cameras, Pelosi will probably mutter something about “making history,” as she did before.  Maybe she’ll again pass out souvenir signing pens like lollipops at a town carnival.  It’s an insult to charades.  Pelosi seeks retaliation masquerading as impeachment.

The first impeachment trial in the Senate a year ago was a baseless fiasco that ended in the easy acquittal of President Trump.  Democrats did not come close to mustering the two-thirds majority votes required for conviction and removal from office.  That predictable outcome rendered the entire exercise a colossal waste of time.

It is almost certain that the sequel will mimic the same bad ending.  Democrats in the House rushed through an ineptly crafted article of impeachment accusing Trump of “inciting an insurrection” when he delivered a speech on the nation’s mall on January 6, 2021 and criminals chose to riot inside the Capitol building.

Pelosi and her colleagues didn’t bother to abide by their own established rules that call for hearings, presentation of evidence and witnesses, the right to cross-examine those witnesses, the right of defense counsel to be present, and the right of an accused to mount his own defense.  By depriving Trump of the essential rights of due process, they abandoned all semblance of fairness in an impetuous bid to pass what can only be described as a “counterfeit impeachment.”

This thin veneer of legitimacy will not withstand scrutiny in the Senate when the trial is expected to commence on Monday, February 8, 2021.  Republican senators are sure to assail the trampling of fundamental rights that are a cherished part of any trial process, including impeachment.  A motion to dismiss the case on this basis must be seriously considered.

A dismissal motion should also argue that the Senate lacks jurisdiction and authority to hold an impeachment trial of a private citizen who cannot be removed from office.  It is obviously an impossibility to expel a person from an office he has already left.

Take a moment to read the text of Article II of the U.S. Constitution.  It states that “The President…shall be removed from Office on Impeachment for, and Conviction of, Treason, Bribery, or other High Crimes and Misdemeanors.”  Yet, Trump is no longer “The President” as the Constitution defines it because Joe Biden is.  We have one president at a time.

As law professor Jonathan Turley has correctly argued, removal from office is the primary purpose of impeachment.  Inasmuch as Trump does not hold a federal office, a belated Senate trial of the former president would be invalid and unconstitutional.

There is precedent for this, as Turley explained.  William Blount, one of the signers of the Constitution, was the first federal officer to face impeachment in 1798-99.  The Senate, on a motion to dismiss, refused to hear the case because, in part, Blount had already left office and the Senate did not have jurisdiction over a matter that was moot.

Some have argued that the value of a retroactive Senate impeachment trial is to bar Trump from holding future federal office.  However, a strict reading of the Constitution indicates that disqualification from office is a secondary purpose.  Indeed, it is a separate vote that can happen only after the Senate decides on removal.  In other words, it is an optional, discretionary, and contingent penalty.  Without removal, there can be no disqualification.  Since Trump cannot now be removed from an office he does not hold, such a disqualification vote would not be constitutionally valid.

If Congress is allowed to prevent private citizens from holding office by the practice of retroactive impeachments, what is there to stop it from deploying this tactic to forbid anyone they might politically oppose in the future?  The answer is nothing.  This is surely not what the Framers intended.

Given the current composition of the U.S. Senate (a 50-50 tie with Vice President Kamala Harris casting the deciding vote), a motion to dismiss may not succeed for purely political, instead of constitutional, reasons.  Trump’s defenders will then be forced to argue the case based on its conspicuous lack of merit.

Did Trump truly “incite an insurrection,” as the impeachment article alleges?  It appears that Democrats cavalierly assumed that Trump was the proximate cause of the violence without ever bothering to consider what he actually told the gathered crowd.

In relevant part, here is what Trump said:  “I know that everyone here will soon be marching over to the Capitol building to peacefully and patriotically make your voices heard.”

Nowhere in Trump’s remarks did he advocate violence or destruction of property.  He did not direct or encourage protesters to launch an assault on the Capitol building, breach security, attack police, threaten lawmakers, riot, vandalize, loot, and engage in seditious conduct.  To the contrary, Trump called on the crowd to act “peacefully.”  He urged them to make their “voices heard,” not their actions devolve into violence.

Under the law, incitement requires the speaker to be clear, obvious, and unequivocal in directing specific acts of imminent harm.  There is no evidence Trump did this.  Yes, he extolled people to voice support for Republican lawmakers who were contesting the electoral vote and to “fight like hell” in their challenge of that result.  But encouraging a public demonstration is not the same thing as inciting criminal acts.  There is a big difference between rousing passions in a speech —which all politicians do— and inciting an insurrection.  The former is protected by free speech, while the latter is not.

As I have argued before, Trump’s remarks on January 6, 2021 were ill-advised, if not foolhardy.  They were driven by an obstinate refusal to accept defeat and the mistaken belief that Congress had the constitutional authority to reverse the outcome by altering the tally of electoral votes.  But his words that day do not remotely constitute an impeachable offense or meet the legal definition of incitement.

The violence on our nation’s Capitol was grotesque and disgraceful.  Those who committed crimes must be prosecuted and punished.  However, what happened there does not constitute grounds for impeaching Trump, nor should Congress be permitted to compound the tragedy by contorting the meaning of impeachment for political gain or persecution.  It is time to end the politics of revenge.

In this article:impeachment, Nancy Pelosi