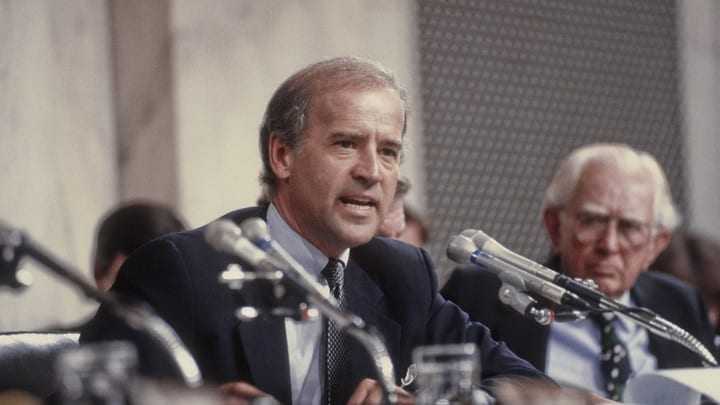 [otw_shortcode_dropcap label=”O” font=”Ultra” background_color_class=”otw-no-background” size=”large” border_color_class=”otw-no-border-color”][/otw_shortcode_dropcap]n May 1st presidential candidate Joe Biden wrote a two-page letter defending himself against his accuser Tara Reade. The worst part, it was released under the pretense of being in support of April as “Sexual Assault Awareness Month” and touted how much he had done over the years for victims’ rights while in office.

“To me, freedom from fear, harm, and violence for women was a legal right, a civil right, and a human right. And I knew we had to change not only the law but the culture” Biden’s statement read. And so, “A law I wrote over 25 years ago…to this day, I am most proud of the Violence Against Women Act” Biden continued.

Then-Senator Joe Biden introduced the Violence Against Women Act (VAWA) in June of 1990, and it was signed into law by President Clinton in 1994. However, we have come to learn that in 1993, a staffer of Biden’s at the time, alleges she encountered a horrendous sexual assault by Biden.

Now, decades later, the water gets even murkier. In his May 1 statement, Biden suggests as part of his defense against Reade, if she made a complaint about him at the time which she claims she did, “there is only one place a complaint of this kind would be – the National Archives.” Biden continues, “The National Archives is where the records are kept at what was then called the Office of Fair Employment Practices.”

Biden then makes a demand: “I am requesting that the Secretary of the Senate ask the Archives to identify and records of the complaint she alleges she filed and make available to the press any such document. If there was ever any such complaint, the record will be there.”

Here is the bombshell: “Biden was one of six Democrats who joined an effort to block the Office of Senate Fair Employment Practices in 1991 on the grounds that it was unconstitutional” The Free Beacon reported. Biden’s vote “came less than two years before Tara Reade allegedly filed a complaint about her treatment as an employee in Biden’s Senate office.”

Fast forward almost 30 years and Biden uses the very office he attempted to sabotage in his defense. Biden uses the office as a pawn in his façade as a women’s rights advocate. But in reality, Biden attempted to block the creation of the office just “weeks after Anita Hill appeared before the Senate Judiciary Committee, which Biden chaired at the time.”

Turns out Biden was not so keen on making sure women were heard, nor was he so worried about their “freedom from fear, harm, and violence” which as of May 1, he now maintains is “a legal right, a civil right, and a human right.”

Although the office was created because Biden and his colleagues’ attempt at declaring the office unconstitutional failed by a 76-22 vote, Biden faced severe scrutiny for his votes by women’s groups and activists. Ladies, where is your outrage now?