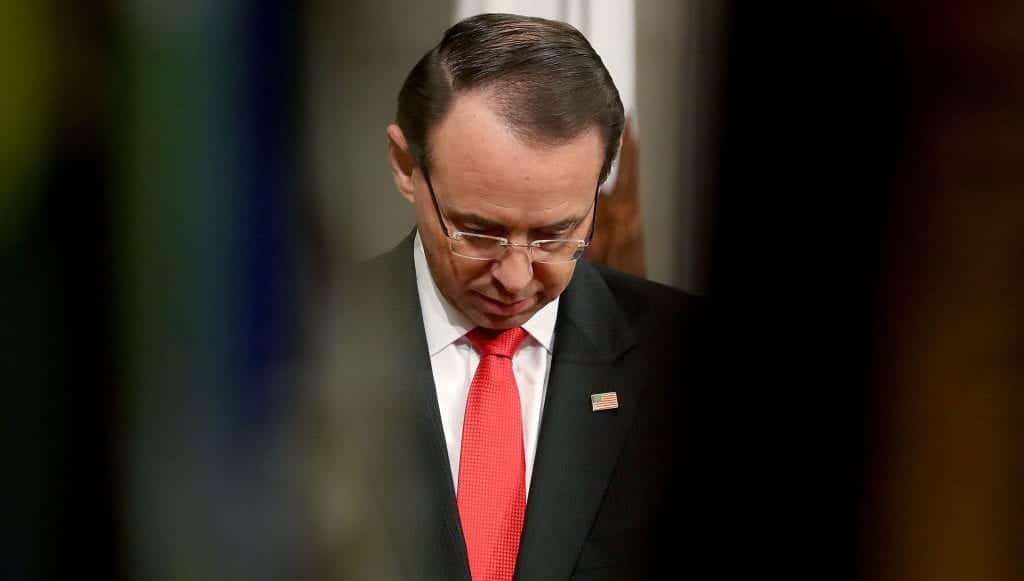 [otw_shortcode_dropcap label=”F” font=”Ultra” background_color_class=”otw-no-background” size=”large” border_color_class=”otw-no-border-color”][/otw_shortcode_dropcap]ormer Deputy Attorney General Rod Rosenstein is a master of prevarication and deflection. He holds an M.S. in BS and a Ph.D. in vacuous excuses. He’s a professor emeritus of duplicity and deception. As a prodigious suck-up, he’s the Eddie Haskell of lawyers.

We can expect Rosenstein’s skill set to be on full display Wednesday when he finally and belatedly appears before the Senate Judiciary Committee as its first witness in an investigation into the origins and evolution of the fallacious Trump-Russia collusion probe.

During his ignominious tenure at the Justice Department, Rosenstein was at the center of the Russia hoax, pulling the investigatory levers of manipulation over an imaginary collusion conspiracy that eventually went bust. But not before incalculable damage was done to the Trump presidency, government institutions, and America’s faith in our system of justice.

Before his departure from the Justice Department in May 2019, Rosenstein consistently spurned most attempts by Congress to explain his inexplicable actions and shady tactics. He was a profile in cowardice. Perhaps now he will be held to account. It won’t be easy.

Rosenstein holds an M.S. in BS and a Ph.D. in vacuous excuses.

When the truth is at issue, Rosenstein is as slippery as an eel. He’s deathly allergic to personal and professional responsibility. Everyone else is to blame. When in doubt, deny it ever happened. In Rosenstein’s orbit, integrity is a mythical platitude.

Rosenstein’s testimony comes at a critical juncture. Just recently, the FBI document that launched the Trump-Russia Witch Hunt was declassified and made public. The FBI Electronic Communication (EC) dated July 31, 2016, identifies not a single scrap of plausible evidence that justified the bureau’s investigation of the Trump campaign.

Under FBI regulations governing the opening of a formal probe, the agency is required to present specific articulable facts and credible evidence in support of a crime. None was stated in the EC. Hence, there was never a factual predicate nor a reasonable basis that warranted what then-FBI Director James Comey’s bureau was doing.

Moreover, there was no reliable intelligence information to merit a counterintelligence probe, which was a cleverly contrived cover for a criminal investigation.

Undeterred, then-FBI agent Peter Strzok engineered what can only be described as a “phantom” EC record to target the Trump campaign with a baseless investigation in search of a crime.

Brock says the EC memo proves that the FBI’s investigation should never have been opened up “in a million years.” He called it a “made-up investigation that sprung from the mind of someone who despised Donald Trump, and then blessed by inexperienced leadership at the highest levels who harbored their own now well-established biases.”

Given this newly discovered information, Rosenstein must be asked during his Senate testimony about his knowledge of the FBI’s corrupt conduct in triggering an invalid investigation of Trump. When then-Attorney General Jeff Sessions recused himself, Rosenstein was placed in charge of the case in April 2017. Did he examine the FBI file and discover it was devoid of evidence and therefore illegitimate? How could he not? Why didn’t he expose the truth?

Did Rosenstein question Comey, Strzok and others at the FBI about any of this or demand that they produce some tangible evidence that would justify the continued investigation? Why didn’t Rosenstein shut down an obviously illicit probe of the president? He had every opportunity to do so, but did not. Instead, he accelerated and elevated the investigation to a more dangerous level.

Rosenstein must be asked specifically by members of the Senate Judiciary Committee why he appointed Mueller. There was still no evidence of a collusion conspiracy involving the Trump campaign and Russia. Months earlier, in January of 2017, the FBI had debunked the infamous Steele “dossier” upon which the FBI had so heavily relied. It turned out to be a collection of fabrications and exaggerations, as Inspector General Michael Horowitz later found. Other FBI efforts to locate collusion evidence produced nothing.

Therefore, upon what legal and factual basis did Rosenstein make the appointment? The special counsel regulations require that there first be some evidence of a potential crime. What crime? What evidence? An “articulable criminal act” must be identified. What act? It is clear that Mueller’s appointment was defective because he was empowered to investigate something that was not authorized by the regulations.

Those same regulations also state that a special counsel can only be named where an investigation or prosecution “would present a conflict of interest for the Department of Justice.” Where exactly was the conflict? Sessions had already recused himself, and there were no other known conflicts that would have prevented regular prosecutors from handling the case. Rosenstein has never offered an explanation for that fundamental defect. He must now be asked.

It is folly for Rosenstein to argue (although he surely will) that the firing of Comey was the reason for the special counsel, inasmuch as it was Rosenstein who authored the memo recommending the director be sacked for repeatedly violating FBI regulations.

Was Rosenstein unduly influenced by Comey himself? Recall that the canned director bragged how he leaked presidential memos to the media for the sole purpose of triggering a special counsel. Rosenstein must be asked if Comey’s devious machinations prompted the decision to name Mueller.

And why select Mueller of all people? He was a longtime friend, colleague and ally of Comey. Isn’t that a serious conflict of interest? Was there some hidden deal? Was Mueller hired to either justify or cover up what Comey had done? Who did Rosenstein talk to about hiring Mueller? Where did the idea emanate?

When Trump met with Mueller in the Oval Office (ostensibly to interview Mueller for the job of replacing Comey as FBI director) the day before Mueller was named as special counsel, why was Mueller’s pending appointment concealed from the president? Was this a scheme to gather evidence against Trump about his firing of Comey?

Rosenstein’s Refusal to Recuse Himself

Once Mueller was appointed, he began investigating whether Trump had obstructed justice in the firing of Comey – again, an absurd proposition. Since Rosenstein had held extensive conversations with Trump and Sessions about discharging Comey for a justifiable cause, this made Rosenstein a central witness in any obstruction case. It presented an egregious conflict of interest that demanded his recusal. Yet, Rosenstein refused. Why?

The most important person who could attest to the president’s motivations was the very man who supervised the investigation into Trump’s intent. There is no greater conflict of interest.

Footnotes in the Mueller Report seem to confirm that Rosenstein was actually interviewed as a witness by the special counsel. Although Mueller answered to Rosenstein it was Rosenstein who had to answer Mueller’s questions. That is about as warped and improper as a case can get.

Think of it this way: the boss was questioned by his subordinate, and then the boss played an instrumental role in deciding whether charges should be brought based, in whole or in part, on his own testimony. It does not take a genius to realize that the scenario was fundamentally wrong and unethical. A lawyer cannot be an impartial investigator, witness, prosecutor and judge all rolled into one.

Rosenstein must be asked hard questions about his atrocious lapse in judgment that rendered the entire special counsel investigation inherently suspect amid persistent questions of self-interest, political bias and a lack of objectivity.

The then-deputy attorney general advised Trump how to get rid of Comey and then hired Mueller to investigate whether that decision constituted obstruction of justice by the president. No responsible and ethical lawyer would ever do such a thing.

What if Rosenstein did not tell the truth when he was interviewed? What if other witnesses or documents offered proof that he lied? As supervisor of the case, would he disregard it and cover it up? Or would he decide to charge himself for false statements or perjury?

Rosenstein had not just one but two untenable conflicts of interest. He was tangled up in the “collusion” case, as well. He signed his name on the fourth FISA (Foreign Intelligence Surveillance Act) warrant application to spy on Trump campaign associate Carter Page. The Justice Department subsequently determined that the warrant was unlawfully obtained without probable cause.

In my next column, I will outline how the Senate Judiciary Committee should hold Rosenstein to account for the lies and fraud perpetrated on the Foreign Intelligence Surveillance Court.

I’ll also address how Rosenstein should be grilled by senators over his leading role in what became known as the “attempted coup” – a disgraceful plot to secretly record the president and recruit Cabinet members to remove him from office under the 25th Amendment. Rosenstein told Trump that “it didn’t happen.” Government memos show that it did.

There is a lot to this sordid story … and many more questions for the reprehensible Rosenstein.