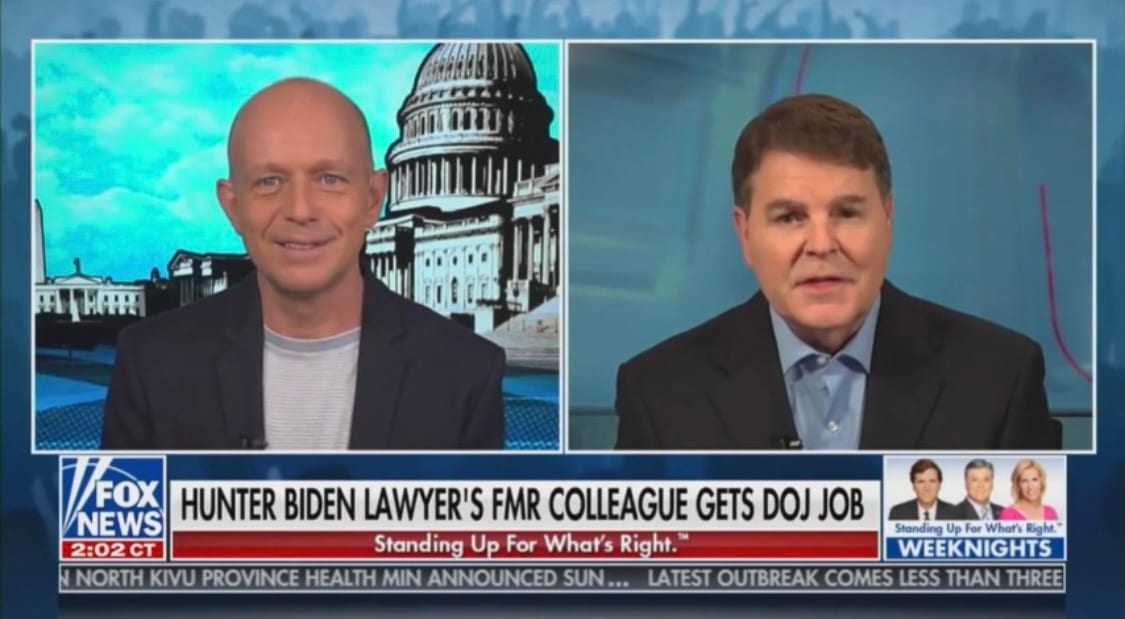 The new acting head of the Justice Department’s criminal division is none other than a former colleague Hunter Biden’s attorney. What’s more, this comes amidst an investigation into Hunter’s suspicious foreign business escapades.

Gregg Jarrett appeared on The Next Revolution with reaction.

“A cynic or a skeptic, and you can count me among them, would say ‘the fix is in.’ There are thousands and thousands of qualified lawyers who could have filled this position, heading up the criminal division, overseeing Joe Biden’s son’s criminal investigation,” he said.

“Of all the people that Joe Biden picked – and he did it on his very first day in office – is Nicholas McQuaid, who has a close association with Hunter Biden’s lawyers. They worked together on white collar criminal defense cases. Whether or not they worked specifically together to defend Hunter Biden, no one is saying, which makes me very suspicious.”

Jarrett blasted the decision for its direct violation of Justice Department rules.

“This is a flagrant conflict of interest in violation of Department of Justice rules and regulations,” he said. “At the very least, it creates what’s known as the appearance of impropriety and under those regulations, when you have that, it is mandatory that you disqualify yourself and yet, we’ve heard nothing about McQuaid recusing himself. So, as I say, it appears to me the fix is in. This is exactly why I was so critical of Bill Barr for failing to appoint a special counsel to make sure that there was no undue influence over the Hunter Biden case once Joe Biden was inaugurated.”

He went on to lay out the only solution to ensuring this conflict of interest is dismantled.

“It should’ve been instantaneous. The only pressure that can now be applied is by the Senate Judiciary sending a very strong letter to the Department of Justice and the acting attorney general demanding McQuaid recuse himself,” he said.

“That’s about the only way that you can get a situation in which this investigation is not subject to undue influence and I suspect this is going to be part of the question and answers that republicans will have for Merrick Garland, the nominee to be the Attorney General, during his upcoming confirmation hearing,” he added.

“They’ll solicit absolute promises that no one, including McQuaid, will interfere and they’ll demand – and they should demand – McQuaid’s recusal.”

Jarrett urged that this isn’t just a tax affair matter, rather it’s a blatant criminal case.

“I think it does and it’s an unfortunate signal and what’s equally unfortunate is that nobody in the mainstream media seems to care,” he said. “You’re right about your analogy, if it were Don Jr. and Rudy Guiliani overseeing Don Jr.’s case, the media would be howling at the top of their lungs and this is not easily dismissed, as Hunter Biden would have you believe, ‘oh, it’s simply a tax affair matter’ as if they’ll pay a fine and that’s it. No, there is a grand jury investigation, which means this is a criminal case and they’re looking at Hunter Biden’s receipt of up to $5 million from a Chinese company that was funneled through various accounts and firms that Hunter Biden controlled,” he said.

“That smacks of money laundering, and the feds got onto the case through government and treasury department suspicious activity reports. So, they’re looking at everything from tax evasion – which is a crime – to tax fraud, to conspiracy to commit fraud, to money laundering, perhaps even racketeering, so this is a serious matter, not just a simple tax affairs case as Hunter would have you believe.”