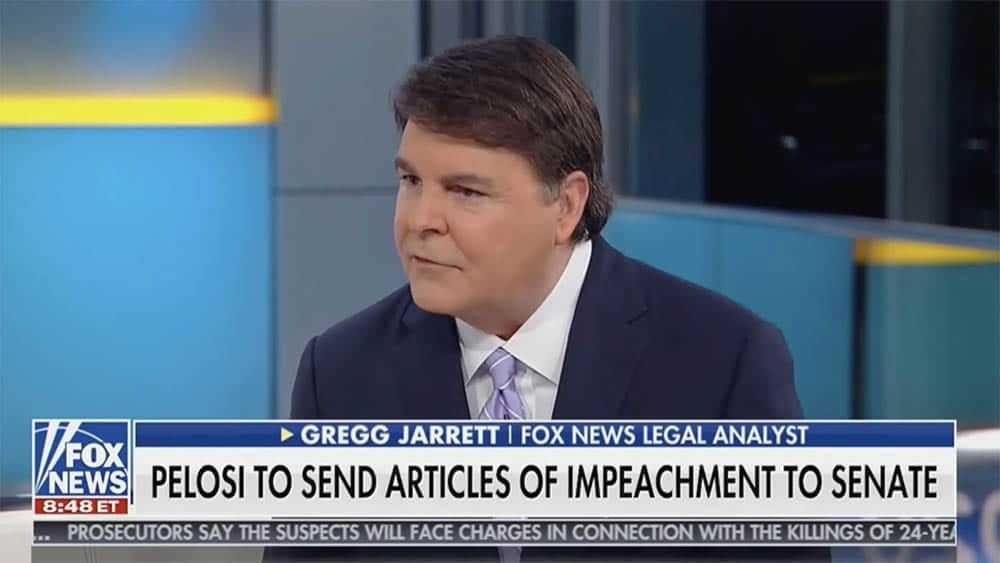 During an interview on Fox and Friends yesterday, Gregg discussed how Nancy Pelosi’s impeachment hoax is blowing up in the face of the Democrats, and all of those who suffer from Trump derangement syndrome. Gregg made the powerful statement that Nancy Pelosi’s attempt to strongarm the Senate is due to “Pelosi’s disdain and contempt for the Constitution” which is only “exceeded by her thirst for power.”

Lisa: After nearly a month, House Speaker — wasn’t that great. Nancy Pelosi is finally planning to send the articles of impeachment to the Senate this week.

Dean: But a “New York Post” op-ed is questioning the delay, suggesting that the speaker thinks impeachment is all a big mistake. The op-ed reads, my working theory is this. Pelosi realized impeachment was a mistake. The only way to mitigate the damage to undertake a ham-fisted effort to slam the Senate trial or dampen or circumvent that inevitable moment. In the process, Pelosi destroyed the Democrat’s justification for pushing the impeachment in the first place. Pete: Is that argument correct? Joining us Fox News legal analyst, Gregg Jarrett.

Gregg: Good to be with you guys.

Pete: What do you make of that?

Gregg: It’s a solid argument. I think you’re right, Nancy Pelosi made a mockery of impeachment and debased her high office. I think she withheld the articles for several reasons. First of all, she thought the specter of impeachment without an acquittal in the Senate would damage President Trump politically and prevent him from saying he was vindicated. It didn’t work. Public opinion hasn’t changed. It undermined her entire rationale for rushing impeachment article through. Was it urgent? Second of all, I think she thought, she knew the articles of impeachment were incredibly weak, specious, bereft of any evidence. She hoped magically dropping out of the sky, some incriminating evidence would appear if only she just waited. But most importantly, blinded by her own arrogance and hubris, she thought she could extort the Senate letter her dictate terms of trial procedures in the Senate and calling of witnesses. It is none of her business. Article I, section 3 of the Constitution says it is the sole power of the Senate to try impeachment. Doesn’t say, but only with the consent and direction of the speaker of the House. You know, Pelosi’s disdain and contempt for the Constitution is exceeded only by her thirst for power.

In this article:Constitution, Fox and Friends, Nancy Pelosi, news4