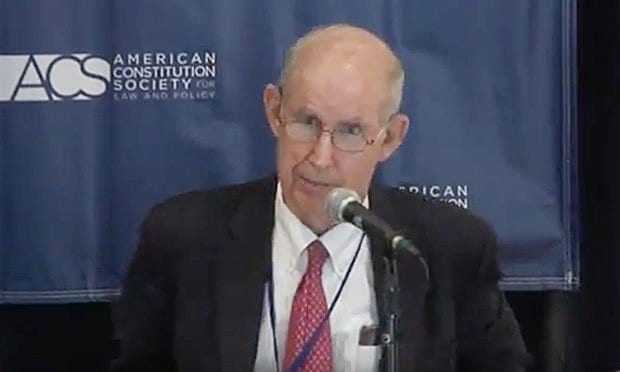 [otw_shortcode_dropcap label=”A” font=”Ultra” background_color_class=”otw-no-background” size=”large” border_color_class=”otw-no-border-color”][/otw_shortcode_dropcap] federal judge in Wisconsin is making headlines by trashing Chief Justice of the United States John Roberts and the conservative majority on the Supreme Court. This is likely what he wanted.

The first thing you should know about U.S. District Judge Lynn Adelman is that he is a zealous and habitual flamethrower. His latest diatribe, published in the Harvard Law & Policy Review, was designed to shock with the incendiary title, “The Roberts Court’s Assault on Democracy.”

Using the word “assault” was an invective guaranteed to conjure up images of criminal behavior, although that is nowhere in Adelman’s article. But his contention that democracy is on the precipice because conservatives hold a 5-4 majority on the Supreme Court is his underlying thesis.

This is so, according to the 80-year-old jurist, because sometimes the Supreme Court rules in a way that is contrary to popular sentiment. Never mind that there might be a legitimate or well-reasoned legal basis for such decisions. The “will of the majority is ignored,” bemoans the judge.

Adelman seems to be under the mistaken impression that justices are supposed to conform their decisions not to the law, but to public opinion at any given moment. This is a profoundly distorted vision of how justice and the rule of law are designed to operate within our constitutional framework.

The other two branches of government – executive and legislative– are political in nature and do, indeed, reflect the public’s will. That’s why elections exist.

The judicial branch, however, is notably different. Its job is to interpret the law as written and/or intended. That is how the framers constructed our tripartite government.

The duty of the Supreme Court is not to take the transitory temperature of its citizens or consult polling data and then rule on cases accordingly. If it were otherwise, why not let citizens vote on court cases in a series of perpetual referendums?

Adelman, who was appointed by President Bill Clinton in 1997, levels harsh criticism at a variety of Supreme Court decisions, including campaign finance, collective bargaining, health insurance, gerrymandering and voting rights (his hobbyhorse).

The judge accuses the high court of deliberately favoring large corporations and wealthy individuals as if that was the only reason for its decisions. He rails against economic inequality and social disparities that afflict poor people and minorities.

As constitutional law professor Josh Blackman remarked, “This screed could have come from a Bernie stump speech.” He added, “It has no place in a publication by a federal judge.”

Setting aside the dubious ethical propriety of a sitting federal judge lambasting the chief justice of the United States and his Supreme Court colleagues, it is the blatant partisan nature of Adelman’s attack that undermines his own arguments.

To hear Adelman tell it, President Trump is an “autocrat” and the source of all imagined evil. So, too, is the Republican Party, acting as a witting co-conspirator in the plot against democracy.

Adelman’s antipathy was particularly venomous toward Chief Justice Roberts. Recalling Roberts’ statement during his Senate confirmation hearing that justices are like umpires “who call the balls and strikes,” Adelman referred to the comment as “a masterpiece of disingenuousness.” That is a polite way of calling someone a liar.

Adelman has a demonstrated fondness for publishing politicized denunciations. In 2017, he penned a law review article excoriating “How Big Money Ruined Public Life in Wisconsin.”

The next year, the judge authored another one titled “The Erosion of Civil Rights And What To Do About It.” Last year he composed “The Supreme Court and the Corruption of Democracy.” You get the picture.

Adelman is nothing if not consistent. Conservatives on the Supreme Court are always portrayed by him as the hobgoblins of little minds (to borrow a phrase from Ralph Waldo Emerson).

Sadly, this liberal federal judge gives no credit to the intellectual honesty of the justices who sit well above him on our nation’s highest court. Nor does he respect the judicial philosophies that inform their decisions.

We may not always agree with the Supreme Court. But publicly castigating the justices for their rulings and personally attacking the chief justice as disingenuous serves only to demean and diminish the federal bench.

Adelman certainly has a right to express his opinions. But the caustic nature of those opinions makes one wonder if his own decisions are free of the kind of bias of which he so freely accuses others.