In a Chicago courtroom Thursday evening, Jussie Smollett proved that his acting skills are no better than his lying skills.

Immediately after he was sentenced to 150 days in jail for perpetrating a racist and homophobic hoax, he launched into a diatribe that can only be described as contrived melodrama.

“I am not suicidal!,” he repeatedly yelled.   “If anything happens to me when I go in there (jail) I did not do it to myself,” he added.  Smollett raised his fist and continued to scream that he is not suicidal as court officers scooted him off to the hoosegow where he belongs.

His theatrics was all a charade, more comedy than drama.  Judge James Linn had consented to a camera in the courtroom for the sentencing, so Jussie seized the opportunity to audition for his next farce —a remake of the death of Jeffrey Epstein. 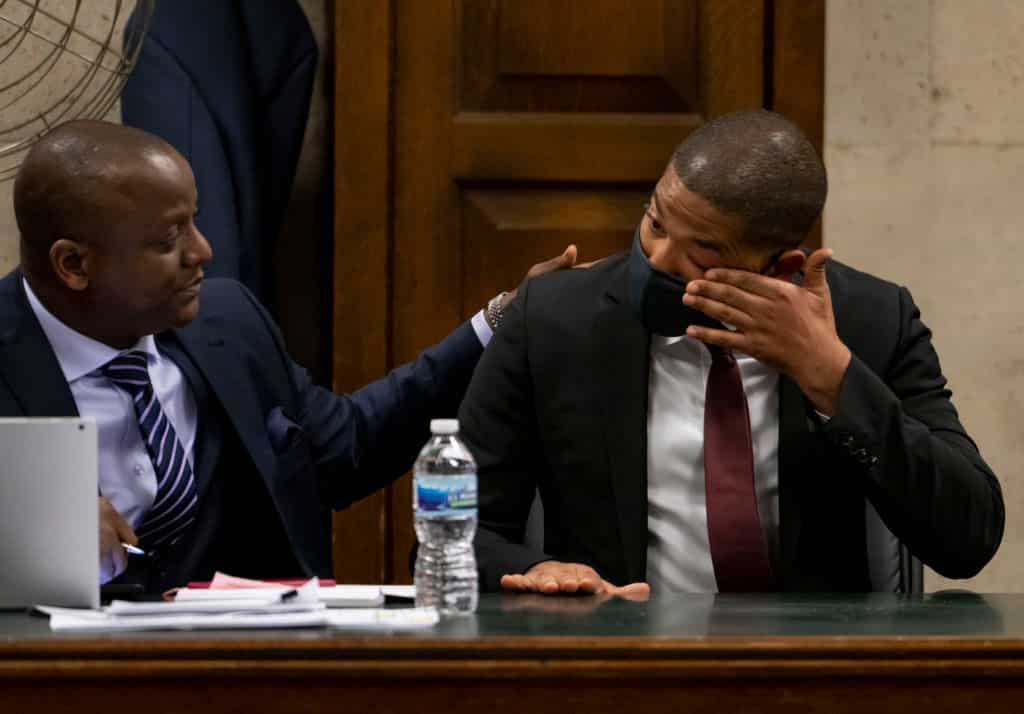 Will Smollett soon claim that someone tried to hang him in his jail cell?  He’ll probably show off fake marks on his neck and then sue the City of Chicago.  He seems to have a twisted fascination with ropes around his neck, which was a central feature in his last hoax.

Judge Linn was wise to Smollett’s phony act.  His honor had presided over an 8-day trial where the evidence was overwhelming that the defendant had paid two brothers to help him stage a hate crime on himself.  Jussie told police that two Trump supporters put a noose around his neck, splashed him with bleach, and then taunted him with racist and anti-gay slurs.  Evidence showed that it was all an invention to generate publicity.

In court on Thursday, Smollett was still trying to gin up racial hatred.  “If I did this, then it means that I shoved my fist in the fears of black Americans in this country for over 400 years and the fears of the LGBTQ community.”

No one was buying his histrionics, especially the judge.  Linn ripped into Smollett for being profoundly arrogant, selfish, and narcissistic:

“You’re a guy who craved attention and wanted to make yourself more famous, throwing a national pity party for yourself.  You are a charlatan pretending to be a victim of a hate crime, and that’s shameful.”

The bad actor has never shown any remorse, a fact cited by the judge who excoriated him for continuing to lie and cover-up.  “You got on the witness stand.  You didn’t have to.  You did.  You committed hour upon hour upon hour of perjury,” Linn said in disgust.

I’ll give a rare tip-of-the-hat to Mayor Lori Lightfoot who applauded the judge’s ruling and then scolded Smollett for his “malicious and wholly fabricated claim.”

As the court correctly pointed out, the hoax did enormous damage by inciting racial hatred in a city already on edge.  But equally important was the harm to real victims of hate crimes who may now be reluctant to come forward to police for fear that they will not be believed.

Smollett is the kind of guy who couldn’t care less.  He’s supremely self-absorbed and sees life as nothing more than a stage play with himself in the starring role.  His feigned hysteria in court was a bad performance by a pathetic actor.

Here’s hoping that his career in Hollywood is over.  Roll the credits.  Maybe he can snag a job as a carnival barker.

In this article:Chicago, featured, Jussie Smollett