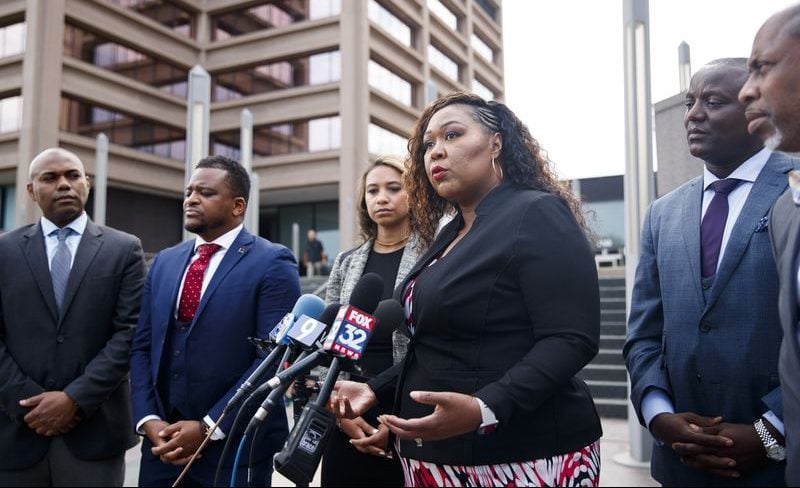 Things are getting stranger and stranger in the trial of actor Jussie Smollett who was charged with lying to police and staging his own attack. Details are emerging that Smollett’s defense attorney called for a mistrial on Thursday, “after a wild few moments in which she accused the judge of lunging at her” reports CBS 2 Chicago.

Defense attorney Tamara Walker reportedly began crying after a comment that Judge James Linn made to her during a sidebar conversation between the judge and attorneys. Linn not only denied the motion for a mistrial but also denied the lunging accusation.

“I’m stunned that you would consider a mistrial” stated Judge Linn. Legal analyst for CBS 2 Irv Miller said “this is a first even for me – I’ve been doing this a long time. But I’ve never seen an attorney accuse a judge of doing anything such as this attorney announced in court that occurred in Judge Linn.”

There is speculation that the defense is just desperately clinging to any potential flotation device in an embarrassing and failing trial. Earlier on Thursday, the brothers Abel and Ola Osundairo testified as witnesses describing how Smollett paid for and directed the staged attack.

The brothers explained how Smollett came up with details down to the specific racial and homophobic slurs the brothers should use during the fake attack. CBS 2 reports additionally, “in a series of bombshell questions, attorneys for Smollett suggested that Abel Osundairo had a secret romantic relationship with Smollett. Abel denied those claims, and he kept his composure as attorneys peppered with questions about his character.”

Abel had described his close year and a half friendship with Smollett, saying the two often took drugs, had sleepovers and went to bathhouses together. CBS 2 reports:

Smollett, who is Black and openly gay, had told police he was attacked as he was walking home on Lower North Water Street around 2 a.m. on Jan. 29, 2019. He claimed two masked men – one of them also wearing a red hat – shouted racist and homophobic slurs as they beat him, put a noose around his neck, and poured a chemical on him. Police and prosecutors have said Smollett orchestrated it himself, paying the Osundairo brothers $3,500 to help stage the attack.

Testimony revealed Smollett wanted to use the security video of the incident for publicity, but the actual attack was not caught on camera.

We spoke to Abel before he began testifying on Wednesday. CBS 2’s De Mar asked him if he was nervous.

“You don’t have to be nervous if you have the truth on your side,” he replied.

The defense had suggested that the Osundairo brothers were homophobic and that was the motive for the attack on Smollett. The special prosecutor ended his redirect by asking Abel about the time he and his brother participated in a Chicago LGBT Pride Parade float.

Afterward, older brother Ola Osundairo took the stand. Ola told the jury that Smollett wanted to be splashed with gasoline, but Ola felt that such a substance was too extreme and used bleach instead.

“I didn’t think it was safe,” Ola said on the stand.