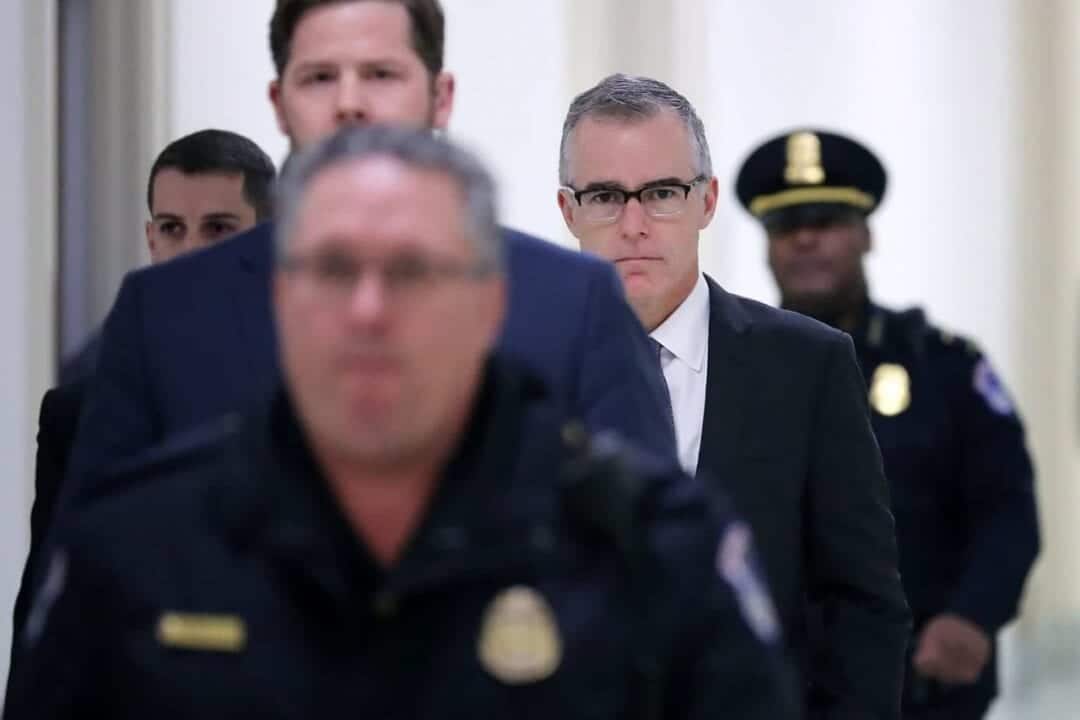 Andrew McCabe is one step closer to a reckoning with justice.

The Department of Justice correctly rejected the equivalent of a Hail Mary appeal from McCabe’s lawyers that he not face criminal charges for lying. U.S. Attorney for the District of Columbia Jessie K. Liu has recommended moving forward against the fired former FBI acting director. Presenting the case to a federal grand jury is likely imminent.

Lest we forget, McCabe has helped put people behind bars for lying. He should be held to the same legal standard.

McCabe “lacked candor” on four occasions when questioned by federal agents about leaking information to a reporter.

In a scathing condemnation of McCabe last year, the Department of Justice (DOJ) inspector general – a neutral investigator appointed by former President Barack Obama – concluded that McCabe “lacked candor” on four occasions when questioned by federal agents about leaking information to a reporter.

A lack of candor, mind you, is a polite way of saying McCabe lied – not once, but four times.

McCabe was appropriately fired from the bureau, and the inspector general promptly referred the case to the DOJ for potential criminal prosecution.

Federal prosecutors have spent the better part of 17 months evaluating the incriminating evidence. They have been more than fair in listening to the explanations and excuses offered by defense lawyers.


In his own defense, McCabe claims he was stricken with a sudden onset of incoherence and amnesia. It was all a misunderstanding and miscommunication, he insists.

In the alternative, McCabe avers that it was nothing more than an innocent failure of recollection. Not likely.

None of the people associated with Trump were ever afforded such vapid excuses when Special Counsel Robert Mueller leveled criminal charges for lying against people like Michael Flynn, George Papadopoulos and Roger Stone.

Should McCabe, who has never disguised his enmity toward the president, be treated any differently because he served in law enforcement? Absolutely not.

McCabe’s deceptions are obvious on their face. He denied to investigators that he helped deliver information to a Wall Street Journal reporter. In fact, he had. He told agents he had no idea who leaked the material. In fact, he had authorized it himself.

In subsequent interviews, McCabe was given multiple chances to correct his lies. Instead, he doubled down in an audio-recorded interview with the same false denials.

Does that sound like a man who misunderstood a simple set of questions or miscommunicated what he did? Not even close.

A lapse of memory? Preposterous.

Ironically, it was the grand jury testimony of former FBI lawyer Lisa Page that allegedly gave prosecutors pause in deciding whether to seek an indictment of McCabe.

According to The New York Times, Page testified that her one-time boss had no motive to lie. This is a clever feint. People lie with or without a motive. Moreover, motive is not a necessary element of proof in a criminal trial.

Page, of course, is the same Lisa Page who exchanged an endless stream of profane and ugly anti-Trump text messages with fired FBI Agent Peter Strzok while the two lovers led the agency’s investigation of Trump in the Russia “collusion” hoax.

Page’s bias and lack of credibility are conspicuous, even for a liberal Washington, D.C., jury.

It should be deeply troubling to all Americans that someone like Andrew McCabe rose to the top of the Federal Bureau of Investigation. His termination for dishonesty is only a fraction of the sordid story.

Before he was sacked, McCabe launched a new and secret investigation of Trump designed to punish the president of the United States because he disliked Trump’s foreign policy statements and objected when the president dared to declare publicly that he had done nothing wrong.

In addition, the president had the audacity to exercise his constitutional power to terminate McCabe’s mentor, James Comey. To McCabe, these were unforgivable sins.

In totality, they made Trump a traitor in McCabe’s mind and only confirmed the acting director’s belief that the president was in league with the Russians and trying to cover it up by obstructing justice.

McCabe, a person possessed of chronic misjudgment, an inflated sense of self-importance, and utter disregard for both the law and executive authority, should never have been employed at the nation’s premier law enforcement agency.

In February, a month before Mueller issued his report that found no criminal “collusion” conspiracy with Russia, McCabe appeared on CNN and the following exchange took place:

Question:  Do you still believe the president could be a Russian asset?

The implication was that the constitutionally elected president was a threat to democracy because McCabe, an unelected and inferior government officer, thought he was.

When asked why he believed Trump had been collaborating with Russia, McCabe offered this explanation: “From the very beginning, the president is referring to the investigation and our efforts as a Witch Hunt, as a hoax. In addition to that, he approaches Director Comey and asks him to drop the case against Mike Flynn. And after Director Comey fails to drop that case, he is in fact fired.”

From that statement, we gain three valuable insights into McCabe.

First, McCabe deemed the president’s protestation of innocence and attack on the FBI’s unjustified investigation to be an admission of guilt and, hence, evidence of treason.

Second, McCabe had no qualms about misrepresenting the known facts of the president’s conversation with Comey about Flynn. Nowhere in the memo that memorialized the president’s alleged remark did Comey claim that it was a demand to drop the bureau’s investigation. But even if “hoping” that the fired national security adviser would be cleared is construed as a request to drop an FBI investigation, the president would have been authorized to do so.

Third, McCabe linked Comey’s firing to his unwillingness to drop the Flynn case, even though there was no evidence that the FBI director was dismissed because of Flynn. Not even Comey has made that assertion.

Comey was fired for insubordination in the Clinton email case and his refusal to repeat publicly what he was telling the president privately – that Trump was not under investigation in the Russia “collusion” case.

In McCabe’s cloistered and contorted world of law enforcement supremacy, falsely accused people are never entitled to proclaim their innocence. Such public expressions, according to McCabe, are witness tampering and obstruction of justice.

In reality, they are not. Even presidents have First Amendment rights.

But if you pronounce Donald Trump a “Russian asset,” you are guaranteed employment at CNN. As of this writing, McCabe is still a paid contributor.

If nothing else, he is an expert on criminality.