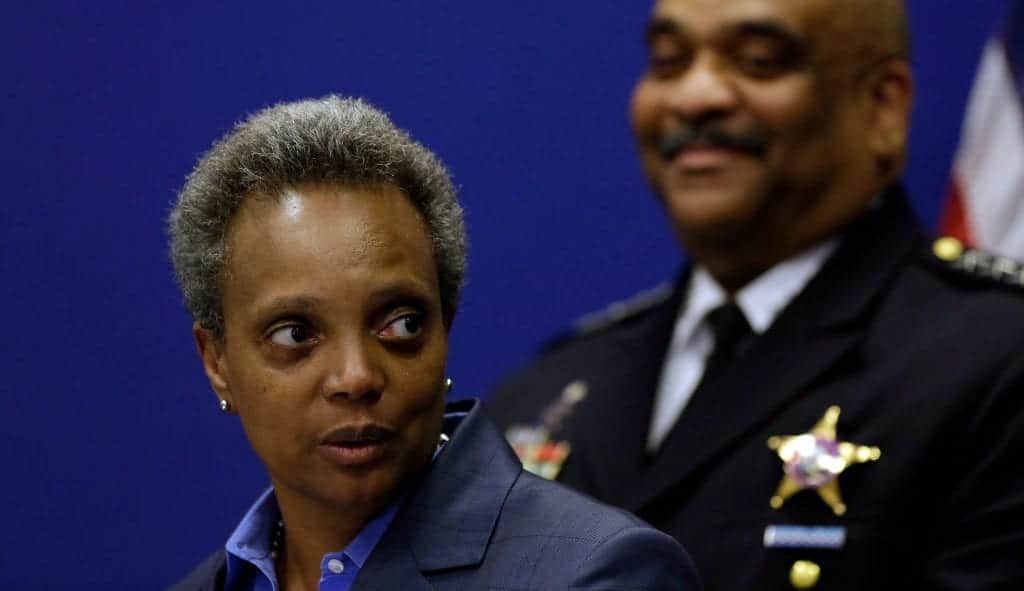 [otw_shortcode_dropcap label=”L” font=”Ultra” background_color_class=”otw-no-background” size=”large” border_color_class=”otw-no-border-color”][/otw_shortcode_dropcap]iberal mayors across the country, particularly in the most crime-infested cities of America, continue to display complete disregard for their citizens. Chicago has experienced a troubling crime wave, but when looking at Lightfoot’s actions it’s easy to see why. She simply is not protecting the citizens of Chicago. Lightfoot has been critical of the police, supported defunding them, and blatantly rejects any federal help from Trump.

Chicago scenes that can be likened to a war zone prompted the Fraternal Order of Police President John Catanzara to write President Trump a letter on July 18 asking for help. In the letter, Catanzara called Lightfoot a “complete failure” and asked Trump for assistance in combating the violence and increased criminal activity.

While Lightfoot is allowing the people of Chicago to be murdered, it’s the police asking for back-up to help save their lives. How does Lightfoot respond to those trying to decrease crime in her city? By immature, name-calling text messages. Lightfoot called Catanzara a “cartoon character” and “clown.” One who is “desperate for relevance” the messages read.

Mayor Lightfoot doubled down on her words at a news conference. “In the middle of everything that’s going on, in a craven political move, this man waved his hand to President Trump and invited him to bring federal troops into our city, a la Portland,” she told reporters. “We have tried to engage him in a constructive way. He refuses to do so because he’s more interested in trying to make himself a political figure rather than to be a leader.” She concluded, “I don’t take back one word that I said.”

Mayor Lightfoot, you already area political figure, but also failing in leadership and therefore people are dying, and private and public property is being decimated. Ironically, Catanzara’s letter did not specifically ask for federal troops, “a la Portland” as Lightfoot said, but rather he asked the President to meet to discuss how to “bring back civility to the streets of Chicago.”

It’s a good thing at least someone is looking into it.

In this article:Chicago, Lori Lightfoot, Police