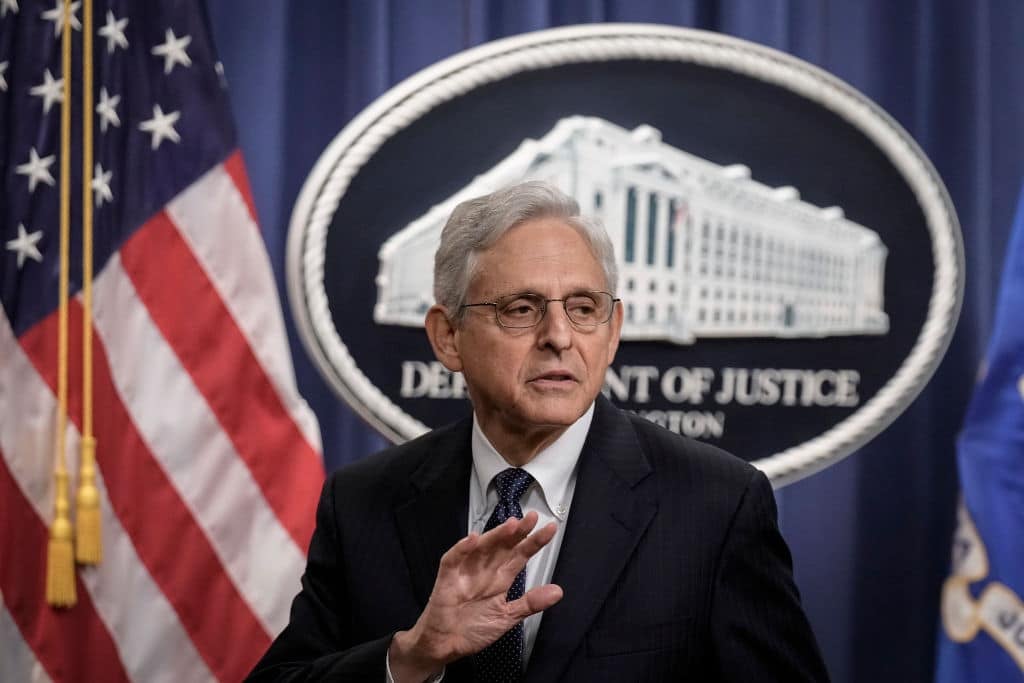 Attorney General Merrick Garland behaves like an imperious ruler.  How dare Americans question his majesty’s motives or actions.  The little people have no right to ask questions or doubt his orders.

This was Garland’s indignant attitude during his recent four-minute news conference when he dressed down the public for its skepticism, if not outrage, over the armed pre-dawn raid on Donald Trump’s home.  Apparently, good citizens have no right to know what went on at Mar-a-Lago or why the FBI deployed such thuggish tactics on a former president.

“I will not stand by silently while the (FBI and DOJ’s) integrity is unfairly attacked,” lectured the attorney general.  Then he went silent as a sphinx.  He refused to answer any questions.  That would be lowering himself.  The almighty Garland sees himself perched on an acropolis high above the meager proletariate below.  He commands his dominion —the Justice Department and the FBI— like a bully dictator who has no time or tolerance for dissent.

This is the hazard when you pick a federal judge to be the nation’s chief law enforcement official.  Too many of them believe their decisions are sacrosanct and beyond reproach.  Federal judges are anointed for life and gulp too often from the cup of self-righteousness.  Garland declared that he personally approved the raid, as if by decree that should end the matter once and for all.  Deplorables have no rights.

So, what happens when the King is wrong —in this case, wrong about the law?  For Garland, the answer is simple.  He just waves his magic scepter and ignores the law, as if it never existed.  After all, what’s the point of being the all-powerful ruler unless there are perks that come with the gig?

Did you bother to watch Merrick Garland’s confirmation hearing to be Attorney General of the United States?  Naw, I didn’t think so.  But I did.  He left the distinct impression that any laws he likes are sacred, but the laws he dislikes are an inconvenience to be swatted aside like pesky flies.  That’s a dangerous mentality.

So, it should come as no surprise that his raid on Trump’s home in Palm Beach, Florida was a lawless and punitive hit job.  Garland cited three criminal codes as the basis for his dubious warrant.  But those statutes have no application because the controlling law on presidential papers is dictated exclusively by the Presidential Records Act of 1978.  Under that very specific law (which nullify general statutes), the Trump had the right to take custody of the documents in dispute.

I’ve pointed this out before, including on air the day of the raid when the news broke.  But don’t take my word for it.  Read the excellent analysis by David Rivkin and Lee Casey, two well-respected constitutional law experts who nicely explained it in the op-ed section of The Wall Street Journal on Tuesday.  They wrote, “the FBI had no legally valid cause for the raid” because “federal law gives Mr. Trump a right of access to them.  His possession of them is entirely consistent with that right, and therefore lawful.”

Garland knew this, but he didn’t care.  He waved his Divine orb and invaded Mar-a-Lago for purely political reasons.  He hates Trump and all Republicans for denying him a seat on the U.S. Supreme Court.  So, he sought vengeance while doing the partisan bidding of his boss, Joe Biden, in a desperate ploy to knock out Joe’s expected opponent in the next presidential election.  That’s how ruthless and unscrupulous despots operate —neutralize the enemy.

Trump is fighting back, as well he should.  Late Monday, he filed a motion in federal district court in Florida challenging Garland’s perversion of the law.  He raised four important points:

In the meantime, Garland must contend with magistrate Bruce Reinhart who was likely snookered by the attorney general into signing the warrant in the first place.  I can only imagine Garland’s fulminating reaction (and blown gaskets) when he learned on Monday that this lowly magistrate had the temerity to formally reject the AG’s argument to keep the entire Trump affidavit under seal.

In his written ruling, Reinhart cited “the intense public and historical interest in an unprecedented search” as justification for releasing at least some of the affidavit’s contents.  His reasoning is sound.  So, what will King Garland do?  How dare a humble subject question the emperor’s new clothes?

Garland has until Thursday to provide the magistrate with proposed redactions.  But don’t expect our tyrannical AG to capitulate —at least in the way Reinhart envisions.  Most of what the Justice Department submits will likely be obscured with thick black ink, except the page numbers and title.  If Reinhart determines, as he should, that this is insufficient and obstructive, Garland will run like a jackrabbit to his former pals on a higher court to maintain his cover-up.

The attorney general pretended to be forthcoming when he moved to release the warrant itself and the inventory list of material seized.  It was a not-so-clever (and sleazy) ruse because little was revealed in those two documents.  The affidavit, on the other hand, would disclose why Garland thought it was so essential to use a criminal warrant instead of a less intrusive subpoena to retrieve documents from Mar-a-Lago.

Importantly, the affidavit might also divulge whether the FBI was dishonest in its representations to the court or otherwise concealed relevant and exculpatory information.  It would not be the first time the FBI has lied to get what it wants.  Sadly, the bureau has a long and disgraceful record of false statements, deceit, omissions, and manipulation of evidence to gain invasive warrants.  Perhaps duplicity is the underlying reason why Reinhart now wants at least some of the affidavit exposed to the light of public scrutiny.

In his press conference, Garland stated that it is standard practice to “narrowly scope any search warrant that is undertaken.”  But that is not what he did.  A close examination of the warrant shows that the AG concocted a general warrant not at all narrow in scope.  That gave FBI agents carte blanche to broadly search unidentified “rooms, structures, and buildings on the estate.”  They were allowed to confiscate anything that might remotely involve government documents during a four-year period, “as well as any other containers/boxes that are collectively stored or found together…”  Basically, agents could grab everything they saw.  They did.

Such an unlimited warrant is an unconstitutional violation of the Fourth Amendment, which demands that all warrants “particularly (describe) the place to be searched and…things to be seized.”  To be valid, a warrant must be quite specific about exact locations within a home and explicitly identify documents sought.  The U.S. Supreme Court has consistently held that “general search warrants have long been deemed to violate fundamental rights.” (Marron v. United States, 275 US 192)

Our founders worried about power-hungry people like Garland who would ride roughshod over the intrinsic rights of the people.  That’s why they crafted our cherished Bill of Rights to guard against egregious abuse.  The Fourth Amendment prohibits “unreasonable searches and seizures.”  To describe Garland’s raid on Trump as “unreasonable” is an understatement.  Moreover, there is evidence that the FBI well exceeded its ill-defined authority by “seizing boxes containing records covered by attorney-client privilege and potentially executive privilege,” according to Fox New Digital.

Garland will oppose Trump’s request for an independent “special master” to review the seized records.  Why?  If the attorney general has nothing to hide and if he truly believes that his raid on Trump’s home met constitutional standards, why would he contest a private review by a neutral third party?  The answer is obvious: Garland has everything to hide because his actions were lawless.

Merrick Garland’s continuing efforts to evade transparency is only fueling the public’s distrust of the DOJ and the FBI.  In case after case, they have protected partisan allies and punished political adversaries.  Garland has arrogantly and corruptly transformed his federal fiefdom into the Department of Injustice.