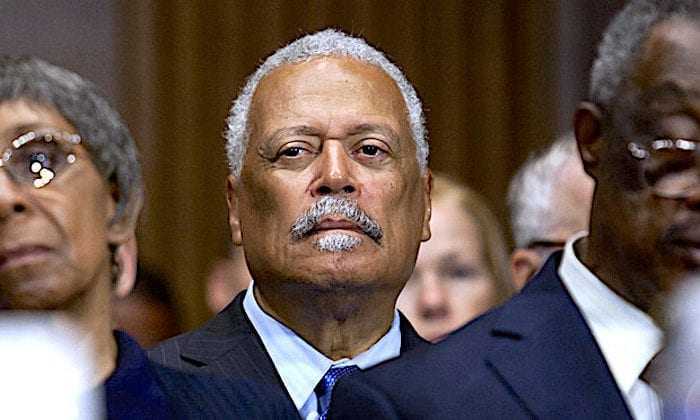 [otw_shortcode_dropcap label=”A” font=”Ultra” background_color_class=”otw-no-background” size=”large” border_color_class=”otw-no-border-color”][/otw_shortcode_dropcap] funny thing happened on the way to the gallows. It was discovered that the condemned man was actually innocent. But the sentence would be carried out, reasoned the hanging judge because the partisan mob must not be left disappointed. (It would also be a waste of good lumber.)

In early 2017, the retired three-star general was deviously set up and framed by James Comey’s FBI for a crime he did not commit. Thereafter, he was coerced by special counsel Robert Mueller’s unscrupulous prosecutors into pleading guilty to the charge of lying to the FBI, even though the evidence now shows he did not lie.

The presiding federal judge in the Flynn case, Emmet Sullivan, is utterly unbothered by the newly revealed evidence of the defendant’s innocence. He seems determined to carry out the sentencing to satisfy the partisan media mob and Democrats who agitate for the punishment of a Trump ally. Ready the scaffold.

But wait. On Tuesday, Flynn’s attorneys resorted to a higher court for relief by filing a writ of mandamus before the U.S. Court of Appeals for the District of Columbia Circuit. They correctly argue that Sullivan should be kicked off the case and/or ordered to follow the law by dismissing the criminal charge against Flynn.

It is highly likely that the defense will prevail, notwithstanding the best efforts of Sullivan to turn the law upside down. This is because the trial court judge has no authority whatsoever to usurp the power of the Department of Justice (DOJ), which uncovered the exculpatory evidence of Flynn’s innocence and decided to drop the case entirely.

Judges are impartial and disinterested referees; they resolve disputes that arise at trial. They neither initiate prosecutions nor perpetuate them.

Judge Sullivan might want to revisit Article III, Section 2 of the Constitution. It circumscribes the role of a judge to preside over “controversies to which the United States shall be a party.”

Normally, there are only two parties to a federal controversy — the prosecution, represented by the DOJ, and the defendant, who is charged with an offense. The judge is not a party at all. He or she acts as a neutral arbiter on issues that may arise in court and maintains order.

What happens when, during the course of litigation, there is no longer a “controversy” between the two parties because it is discovered that the case has no merit? Naturally, the charge is dismissed and the case ends. The judge cannot suddenly commandeer the matter and arrogate the role of the prosecutor by pursuing a charge that, in the judgment of the feds, has lost its evidentiary value and proof.

This is true, even if the prosecutor is wrong in his assessment. The unfettered discretion belongs to the prosecutor alone. A judge may disagree with the decision to dismiss but has no legal authority to change it.

It is a simple question of the separation of powers. The judicial branch (judges) may not supplant the authority of the executive branch (prosecutors). To do so would undermine the constitutional constraints imposed by the Framers. Sullivan surely knows this but intends to ignore it.

These fundamental principles are sacrosanct, which makes it especially confounding that Sullivan has taken it upon himself to appoint a retired judge, John Gleeson, to oppose the DOJ’s plan to dismiss the Flynn prosecution. Forget that third parties are not permitted to intervene at the trial court level, Gleeson certainly knows that Sullivan is acting well beyond his judicial authority. Yet, inexplicably, he will argue otherwise.
In a July 1, 2013, memo and order, Gleeson wrote that “The government has near-absolute power to extinguish a case that it has brought.” Citing well-established case law (ICC v. Brotherhood of Locomotive Engineers, 482 U.S. 270, 283, 1987), Gleeson pointed out that “it is entirely clear that the refusal to prosecute cannot be the subject of judicial review.”

All of this was concealed from his defense team in violation of the law and a judicial order to produce every scrap of exculpatory evidence.

In other words, the decision to drop a case is none of the judge’s business. Period. His written approval is a merely ministerial act.

How exactly will Gleeson now argue against himself, not to mention the clarity of the law and Constitution? A recent op-ed by him in the Washington Post gives us some clues. In it, he argued that Sullivan should proceed to sentencing because the DOJ’s motion to dismiss the Flynn case represents a “miscarriage of justice” born of “corrupt reasons” and “reeks of improper political influence.”

Except that it does not.

The Justice Department decided to end the Flynn debacle because it uncovered documents revealing that the FBI never had a legitimate legal reason to interview him a mere four days into the Trump presidency and because the interviewing agents concluded that Flynn did not lie. Shockingly, the FBI sought to “get him to lie, so we can prosecute him or get him fired.” It was a classic and unconscionable perjury trap.

All of this was concealed from his defense team in violation of the law and a judicial order to produce every scrap of exculpatory evidence.

In truth, the only corruption and political influence were committed by Comey’s FBI and Mueller’s prosecutors. They are the ones who perpetrated a miscarriage of justice by weaponizing law enforcement for political reasons. Flynn was their victim.

It is disgraceful that Sullivan is unconcerned about such abuses of power by government operators. Why isn’t he recommending that prosecutors be charged for lying to the court when they insisted repeatedly that no exculpatory evidence existed? Why isn’t he demanding that the FBI be investigated for knowingly making false accusations and pushing a wrongful prosecution?

To compound the injustice, Sullivan wants Gleeson to make the case that Flynn should face a new charge of perjury contempt for seeking permission from the court to withdraw his forced guilty plea. This is ludicrous on its face. Under the law, confessions and pleas must be “voluntary.” Flynn’s was not. This, too, was hidden from the court in contravention of the law. A confession under threat or duress is no confession at all. Flynn’s coerced capitulation does not magically create a secondary crime.

The defense had no alternative but to seek a writ of mandamus from the D.C. Circuit Court of Appeals to direct Sullivan to follow the law by dismissing the case and ordering him removed from any further proceedings. The chief judge of that very court ruled four years ago that a trial court judge cannot countermand the decision by prosecutors to dismiss criminal charges (U.S. v. Fokker Servs., B.V., 818 F.3rd 733, 740, D.C. Cir., 2016).

Sullivan’s own outrageous bias, demonstrated time and again during his handling of the Flynn case, is an embarrassment to the federal bench. Like the hanging judge, he is determined to punish an innocent man. The mob, after all, is demanding it.