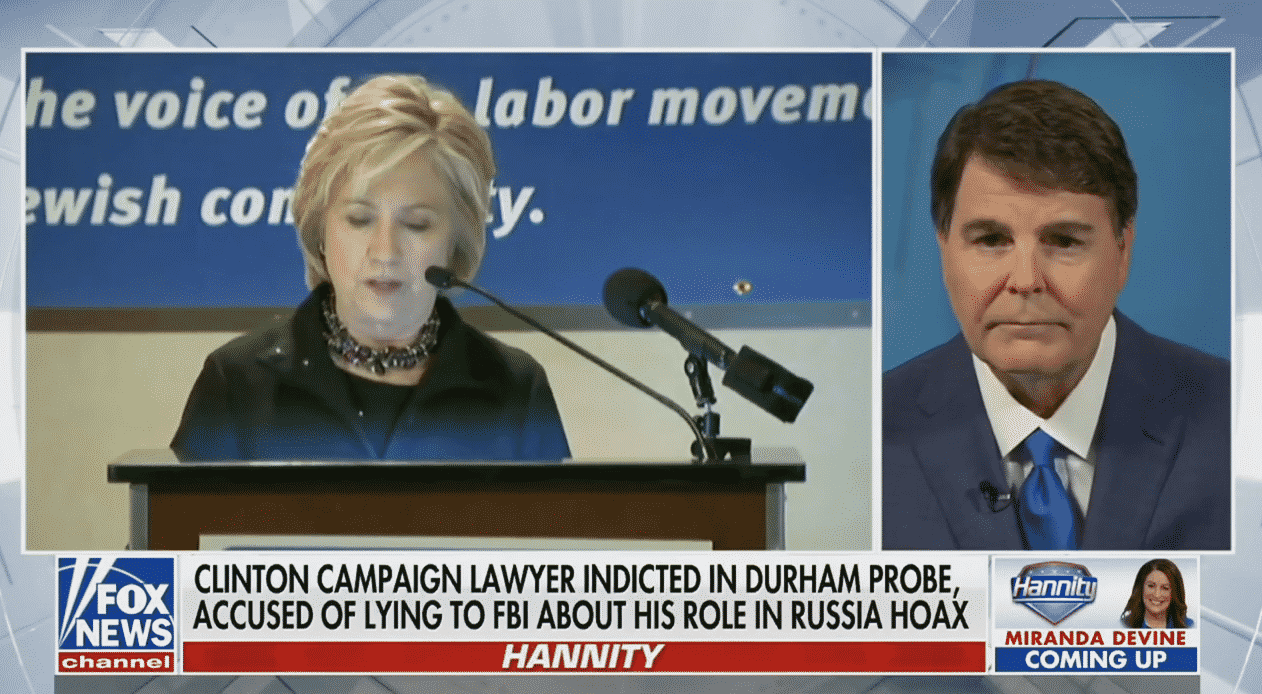 One of the many venomous lies that comprised the Great Russia Hoax was that Donald Trump had a secret channel with a Russian enterprise called Alfa Bank that was linked to Vladimir Putin.  It didn’t exist.  Like many of the other “collusion” lies, it was invented by the dirty tricks department within the Hillary Clinton campaign and helmed by Hillary herself.

Her campaign’s lawyer, Michael Sussmann of the Perkins Coie firm, covertly spread the lie to the FBI.  On Thursday, he was indicted by Special Counsel John Durham on charges that he lied about who he represented by claiming he didn’t represent anyone.  In other words, he allegedly lied about the lie.

Sussmann will likely try to argue that it wasn’t a “material” lie, as the law requires.  You know, just an innocent mistake.  He was confused over who he was representing.  Nonsense.  Lawyers know exactly who they represent because they bill the client for every minute of every hour spent working on their behalf.

The 27-page indictment suggests that Durham has the goods on Sussmann.  Billing records, not to mention handwritten notes, prove that he absolutely knew he was representing the Clinton Campaign but was trying to hide it.

Hillary’s dirty fingerprints on the Alfa Bank scam would have been an important (or “material”) fact for the FBI to know.  The Bureau would have realized immediately that this was nothing more than a political smear based on an absurd canard.

Sussmann and Perkins Coie were one of the many conduits feeding phony information intended to frame Trump for “collusion” crimes he didn’t commit.  Fusion GPS and its nefarious founder Glenn Simpson were also feeding similar lies to the gullible media that happily propagated them to the American public.  Of course, much of it was based on the bogus anti-Trump “dossier” composed by Christopher Steele, a notoriously slimy ex-British spy.

Meanwhile, top FBI officials like James Comey, Andrew McCabe, Peter Strzok and others exploited the lies as a pretext to spy on the Trump Campaign and pursue it’s misbegotten investigation of Trump even though they had no credible evidence to support it and they learned early on that it was all a fabrication.

It was the greatest mass delusion in American political history…and did enormous damage to Trump’s presidency.

All of the aforementioned people should also have been criminally charged.  Sadly, they’ll likely skate —the beneficiaries of preferential treatment by a justice system that bears little resemblance to real justice.

One of the things I discovered as I poured through thousands of pages of research while writing my book, Witch Hunt, is that the entire “collusion” hoax was invented, financed, and disseminated by Hillary Clinton.  Her objective was to frame and vilify Trump so that it would distract from her own burgeoning email scandal.

The shameless lie was drawn from the insidious depths of Clinton’s fictive imagination.  It was magnificently devious and classic Clinton.  Minions like Sussmann were instrumental in spreading the lie, as were Simpson, Steele and a host of other Hillary acolytes.

In the summer of 2016, the intelligence community caught on to Clinton’s sneaky machinations.  So alarmed was CIA Director John Brennan that he rushed over to the White House on July 28th to debrief then-president Obama.

Did Obama put a stop to it and publicly disclose what Clinton had done?  No.  He concealed it.  He then sat idly by and watched as the nation devolved into convulsive turmoil with an exhaustive Trump-Russia witch hunt.  He uttered not a word about the compelling evidence he had seen that incriminated Clinton, not Trump.

In order to cover for himself, Brennan secretly sent a referral to Comey in September of 2016 calling for the FBI to investigate Clinton for her suspected crimes.  What did Comey do?  Nothing.  He buried it.

Years later, when documents were belatedly declassified, Comey was confronted by the Senate Judiciary Committee with the criminal referral and feigned no memory of it.  “It doesn’t ring a bell,” he muttered.

Comey’s sudden onset of acute amnesia was laughably preposterous, but typical Comey.  When caught in a deception or faced with evidence of wrongdoing, he routinely pleads dementia.

Brennan went on to become a paid commentator for MSNBC and repeatedly stoked the odious narrative that Trump was a Russian asset, knowing full well that it was untrue.  He even accused Trump of treason.

So, Clinton got away with clear crimes in her email scandal…and got away with one of the dirtiest political tricks in history by dreaming up her fabulous lie.  Trump, meanwhile, became the victim of a contemptible hoax and the innocent target of a baseless witch hunt.

If nothing else, the indictment on Thursday is further confirmation of just how immoral, conniving, corrupt and unscrupulous Hillary Clinton is.  Her malevolence knows no bounds.

In this article:Gregg Jarrett, Hillary Clinton