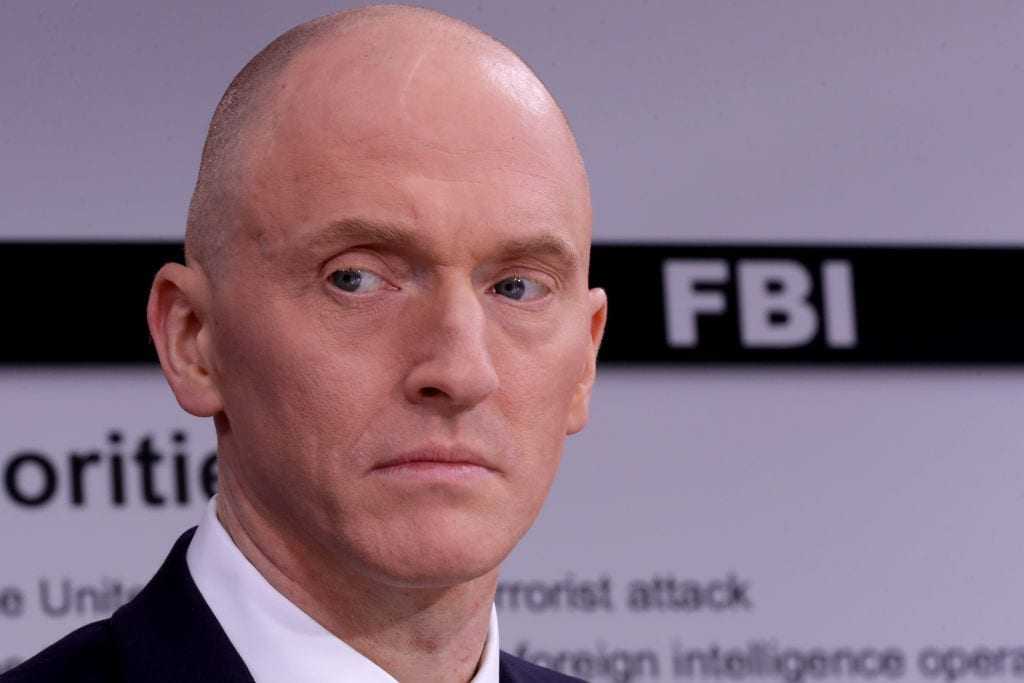 [otw_shortcode_dropcap label=”N” font=”Ultra” background_color_class=”otw-no-background” size=”large” border_color_class=”otw-no-border-color”][/otw_shortcode_dropcap]ewly revealed evidence confirms that a former Trump adviser told the FBI that the campaign never “colluded” with Russia.  Yet, the bureau deliberately concealed this exculpatory information in seeking a warrant to spy and in pursuing its spurious case against President Trump.
A confidential human source (CHS) recruited by James Comey’s FBI secretly recorded a more than 4-hour conversation with George Papadopoulos on October 31, 2016.  Fox News secured and reviewed the 171-page transcript of the discussion, as well as CBS News.
At one point, the source pressed Papadopoulos, “I feel like there’s some heavy Trump supporters out there that kind of want to rig this f***ing election in Trump’s favor and then at the same time, I don’t know.”  The adviser responded, “Dude, you, you…there is no rigging in his favor.”

The entire transcript reads like a bumbling interrogation gone terribly awry.
Despite repeated efforts by the CHS to inveigle some incriminating admission by the ex-Trump foreign policy adviser, Papadopoulos consistently and emphatically denied that the campaign collaborated with Russia to influence the 2016 election.
Yet, all of this pivotal information was covered up by the FBI and Department of Justice as they accelerated their investigation of Trump and sought four successive warrants to surveil another former campaign adviser, Carter Page.
In other words, vital evidence was buried, the judges were deceived, and the court was defrauded.

Under federal regulations that govern both the FBI and DOJ, as well as the rules of the Foreign Intelligence Surveillance Court (FISC), government officials were obligated to disclose this exculpatory information, but failed to do so.  They actively hid it from the court, congress and the American people.
Not for want of trying, no incriminating “collusion” evidence was ever obtained against Papadopoulos, Page, or anyone else associated with the Trump campaign.  No one was ever charged with a conspiracy-related offense because it never happened.  The malicious Comey and his team of rogue operators at the FBI knew it all along.
It gets worse.  In January of 2017, the FBI also discovered that the anti-Trump “dossier” composed by ex-British spy Christopher Steele that was commissioned by the Hillary Clinton Campaign and the Democratic National Committee was equally phony and largely fabricated, as noted in the December 2019 report by Inspector General Michael Horowitz.
This was no small matter.  It was the “dossier” that fueled the dilating investigation of Trump that should never have been initiated in the first place.
Instead of terminating its probe of the president and withdrawing its surveillance warrant, what did the FBI do?  It entombed all of this material and escalated its investigation which eventually led to the appointment of a special counsel, Robert Mueller.
After a 22 month inquiry, the Mueller Report determined that there was no evidence of criminal “ collusion” or, as the special counsel affirmed, “the investigation did not establish that members of the Trump Campaign conspired or coordinated with the Russian government in its election interference activities.”  Of course, the FBI already knew this more than two years earlier.
This latest information corroborates the evidence I presented in my book, Witch Hunt Book” href=”https://thegreggjarrett.com/recommends/witch-hunt-book/”>Witch Hunt: The Story Of The Greatest Mass Delusion In American Political History:

“High officials in government whom we entrusted to uphold the law instead breached that trust and violated the law.  They are the ones who meddled in the election to help Clinton.  Thereafter, they aspired and conspired to evict Trump from office.  Evidence against him was invented or embellished.  Laws were perverted or ignored.  Trump was framed for a “collusion conspiracy that had never existed.  They knew it was untrue.”

The only remedy for lawlessness is justice.  Will it ever happen?  The decision rests squarely on the shoulders of the Attorney General, William Barr.

In an interview this week with Fox News’ Laura Ingraham, Barr called the Trump investigation “one of the greatest travesties in American history.”  He’s right.  It is also the greatest mass delusion in American political history.
Barr stated that the investigation of the Trump campaign was launched “without any basis.”  He noted “a whole pattern of events while he was president…to sabotage the presidency ..or at least have the effect of sabotaging the presidency.”
“My own view,” Barr added, “is that the evidence shows that we’re not dealing with just mistakes or sloppiness. There is something far more troubling here, and we’re going to get to the bottom of it.  And if people broke the law, and we can establish that with the evidence, they will be prosecuted.”
I will repeat what I wrote in my book: “The reckoning awaits.”