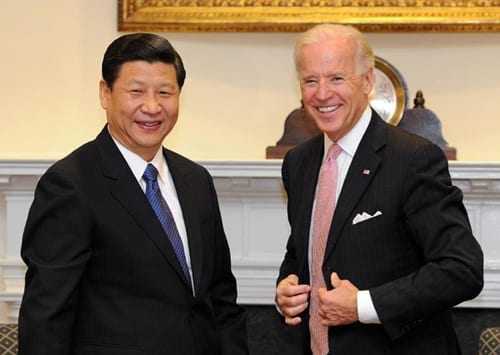 Joe Biden’s claim that he has never discussed business directly with his son Hunter “is false” says Tony Bobulinski. “I have firsthand knowledge about this because I directly dealt with the Biden family, including Joe Biden” added Bobulinski who has been outed as a colleague of the Bidens in text messages obtained by The Daily Caller News Foundation.

On May 1, 2017, Hunter Biden texted Bobulinski, “No matter what it will need to be a US company at some level in order for us to make bids on federal and state-funded projects. Also, We don’t want to have to register as foreign agents under the FCPA which is much more expansive than people who should know choose not to know.” The very next day after the text was sent, May 2, 2017, Hunter arranged for a meeting in Los Angeles with Bobulinski, James Biden and Joe Biden.

Hunter Biden’s text went on to say, “James has very particular opinions about this so I would ask him about the foreign entity. Regardless, we should have a DE come called CEFC America…” At a press conference on Thursday, Bobulinski recognized the occurrence of the meeting and said it lasted an hour. In that hour, the entire meeting, “the Biden’s family business plans with the Chinese” was discussed. Bobulinski said of father Joe Biden that he was “plainly familiar” with the plans discussed at the meeting “at a high level.”

Biden’s reference to FCPA is believed to be the Foreign Corrupt Practices Act. CEFC China Energy is “a Chinese conglomerate whose chairman had links to the communist regime in Beijing” according to the DCNF. Additionally, the DCNF acknowledges “Biden did not explain in the messages why he thought the venture with CEFC would violate FARA or FCPA without the buffer of a U.S. shell company.”

On September 23rd, the Senate Homeland Security and Senate Finance Committees released a joint report “regarding Hunter Biden’s foreign business dealings” which “said that CEFC’s chairman at the time, Ye Jianming, had ties to the People’s Liberation Army” reported the DCNF. Additionally, the Senate report claimed Ye was an officer for a group controlled by the Chinese Communist Party in the 2000s.

Bobulinski has provided emails, text messages and business records to the Senate Homeland Security Committee and even met with the FBI on Thursday. Information provided showed “Bobulinski, Hunter Biden, James Biden and two other partners, James Gilliar and Rob Walker, went on to form companies called SinoHawk and Oneida Holdings to partner with CEFC.” Furthermore, the information shows Oneida Holdings was formed only a mere three weeks after the big meeting, on May 22, 2017.

In this article:Biden, Chinese, news3