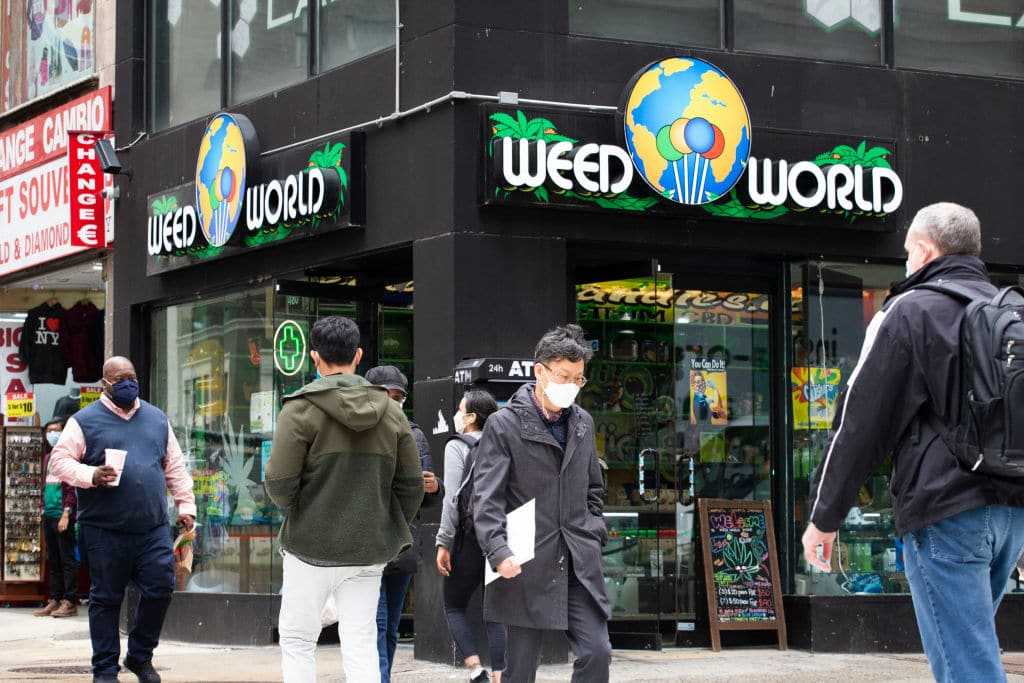 People walk past the Weed World store on March 31, 2021, in Midtown New York.

A new smell will be joining the aroma of feces and urine on New York City streets. Governor Andrew Cuomo signed a new measure into law on Wednesday legalizing the recreational use, sale and growing of marijuana. Shortly after, a four-page memo was distributed to law enforcement on how to enforce the state’s new law. In the case of the new marijuana law, enforcement is more about what not to do.

Cops must now let adults light up and smoke in public, and ignore any exchange of weed unless money is involved. Vehicle searches based on the smell of marijuana will no longer be allowed. Cops also may not “approach, stop or detain” a parolee for smoking or possessing pot, “even if they know the ex-con isn’t supposed to be getting high” reports Fox News.

Instead, they need to “notify the relevant parole officers” to enforce the conditions determined upon prison release. Adults, age 21 and older, legally can smoke weed “almost anywhere that cigarette smoking is allowed including on sidewalks, on front stoops and other places.” The memo notes smoking “in any of these locations is not a basis for an approach, stop, summons, arrest or search.”

One NYPD cop said this could be disastrous for New York citizens’ public safety. “We always say, ‘Drugs equal guns. When you smelled weed, you could pull a car over. Now, you can’t pull them over…that’s bad, especially with all the gun violence going on.”

The cop refers to the new guideline that if a driver appears wasted or smells of weed and admits to “having smoked recently,” the vehicle’s passenger compartment can be searched, but “the trunk may not be searched unless the officer develops separate probable cause to believe the trunk contains evidence of a crime (e.g. gun recovered from under driver seat).”