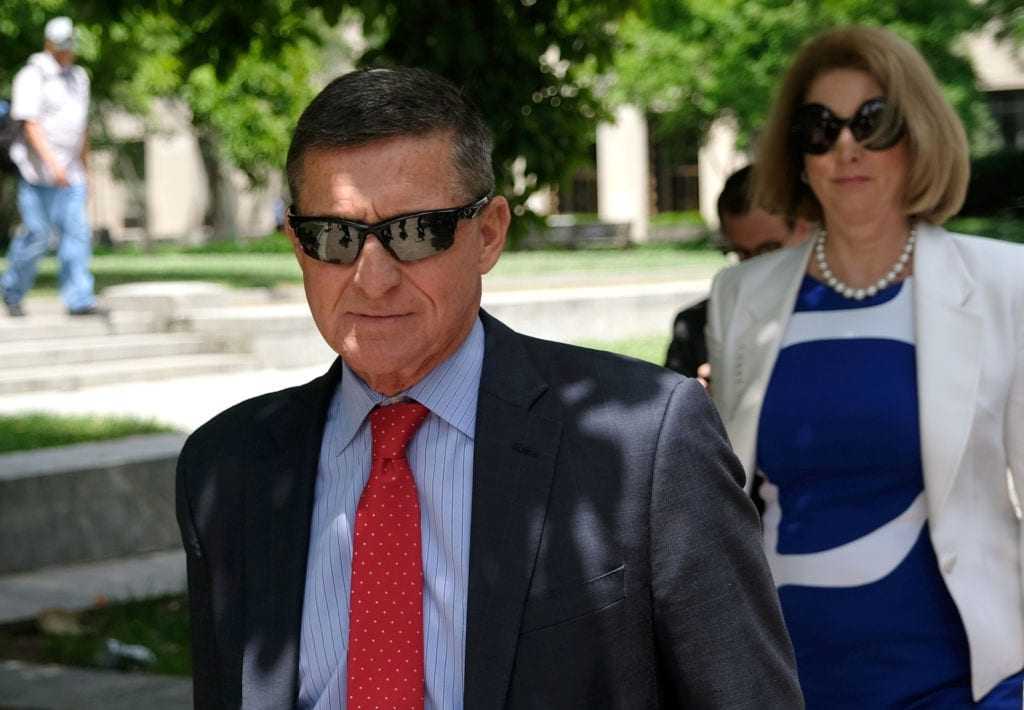 [otw_shortcode_dropcap label=”M” font=”Ultra” background_color_class=”otw-no-background” size=”large” border_color_class=”otw-no-border-color”][/otw_shortcode_dropcap]ichael Flynn is the victim of one of the worst miscarriages of justice in modern times —an innocent man who was unfairly targeted by the FBI, wrongfully prosecuted by special counsel Robert Mueller, and coerced into a guilty plea under threat.

New court documents finally handed over to Flynn’s lawyer contain exculpatory evidence that has been long sought, yet concealed until now.  The charge against him should be dismissed.  Then, he should sue the very people and government that persecuted him under the pretext of a legitimate prosecution.

The unvarnished truth is that the retired Army Lt. Gen. and former National Security Adviser never did anything wrong and committed no crimes.  He was set-up by unscrupulous FBI officials, then relentlessly pursued by Mueller’s team of overzealous prosecutors who were desperate to show that President Trump and his campaign colluded with Russia to win the 2016 presidential election.

The unvarnished truth is that the retired Army Lt. Gen. and former National Security Adviser never did anything wrong and committed no crimes.

Of course, no such conspiracy with Moscow ever existed.  It was a fantasy built on sand of Russian disinformation and lies. The FBI knew it but didn’t care.  As I wrote in a column as far back as 2018, the FBI lied to Flynn to ensnare him in the crime of making a false statement, even though Flynn did not lie at all about his perfectly legal and appropriate conversations with Russian Ambassador Sergey Kislyak.

In my 2019 book, Witch Hunt: The Story Of The Greatest Mass Delusion In American Political History, I laid out the evidence of Flynn’s innocence.  Specifically, here is the FBI summary report on the interview of Flynn conducted by two bureau agents, including the notorious Peter Strzok.  It is dated July 19, 2017:

“Throughout the interview, Flynn had a very ‘sure’ demeanor and did not give any indicators of deception. Strzok and (redacted FBI agent) both had the impression at the time that Flynn was not lying or did not think he was lying.”

So, how is it possible to charge someone with lying to the FBI when the only witnesses —the two agents— determined that the person they interviewed did not lie?  The answer is quite simple: you cannot bring such a prosecution.  Yet, Mueller did it anyway.  The goal was to put pressure on Flynn to say something incriminating about Trump, even if that meant inventing a story that prosecutors wanted to hear.

There is no indication that Flynn did this. But he did plead guilty to making a false statement.  Why did he cop a plea? Because Mueller crushed him financially and threatened to take legal action against the retired general’s son.  It was classic intimidation by ruthless prosecutors.

Before being sentenced, Flynn changed course and hired new defense attorneys, including former federal prosecutor Sidney Powell.  Armed with better counsel, Flynn has been trying to convince a federal judge to allow him to withdraw his guilthttps://www.scribd.com/document/458158482/SUPPLEMENT-TO-MR-FLYNN-S-MOTION-TO-DISMISS-FOR-EGREGIOUS-GOVERNMENT-MISCONDUCT plea citing “bad faith” on the part of prosecutors.

Powell has waged an intense (and skilled) legal battle to get the government to turn over the exculpatory evidence that has long been hidden and is required under law (Brady v. Maryland) to be produced. Prosecutors and the FBI stonewalled, at one point claiming that the original witness report of Flynn’s interview (known as a FD-302) was “missing.”  Right.

Fortunately, Attorney General William Barr ordered a review of the Flynn case, and guess what?  Exculpatory documents have suddenly and magically been found.  They were never missing, just buried by the FBI in a black hole of calumny and cover-up.

The material is still under protective seal so that the public cannot yet read its contents.  However, Powell has access and offered this insight in a court filing:

“This afternoon, the government produced to Mr. Flynn stunning Brady evidence that proves Mr. Flynn’s allegations of having been deliberately set up and framed by corrupt agents at the top of the FBI.  The government deliberately suppressed this evidence from the inception of this prosecution —knowing there was no crime by Mr. Flynn.”

The case against Flynn was originally conceived by FBI Director James Comey and Assistant Director Andrew McCabe under the phony pretense of a Logan Act violation, which had no relevance or application.  Once appointed as special counsel, Mueller accepted the baton and pursued the case against Flynn with a vengeance.

It is now beyond dispute that Gen. Michael Flynn committed no crimes.  But, it appears that top FBI officials and prosecutors may have.  Evidence was concealed and justice obstructed. This is unconscionable behavior.

The charge against Flynn should be dismissed, allowing him to seek redress in civil court.  Moreover, U.S. Attorney John Durham should consider filing charges if the evidence shows that government officials breached their duty to uphold the law and abused their power to prosecute an innocent man.