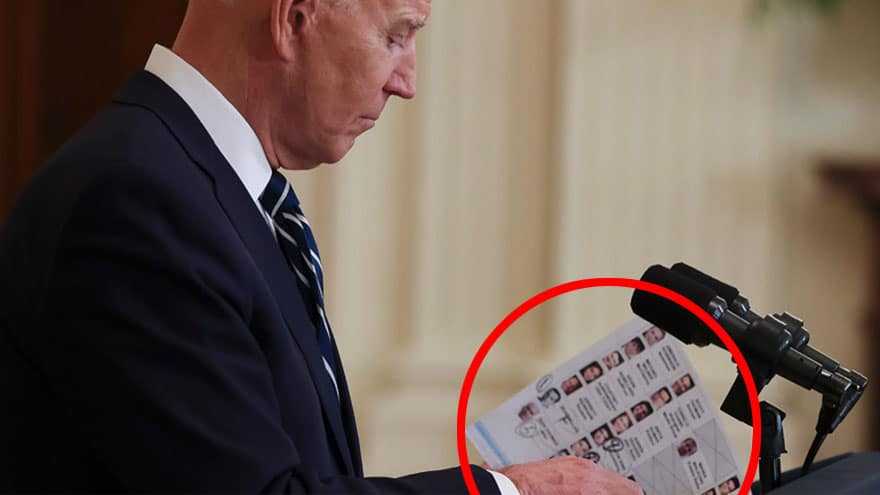 Cheating is wrong kids, even if you are President of the United States. It’s no wonder it took so long for President Biden to be allowed to give a press conference by his team; they needed all the time to prep ‘CliffsNotes’ for Biden. Photographs were snapped of the cheat-sheets he used during his first press conference on Thursday, and they are frankly, embarrassing.

Among the stack of “how to make the President look like he knows what he’s talking about” papers was one with headshot photographs with names for all of the reporters, he was supposed to call on. Even better, they were numbered in order of when they should be called on.

Other answers in front of him included facts about US infrastructure, aka, a policy area Biden is focusing on during his first months in the white House” reports the New York Post. The bullet point read, “The United States now ranks 13th globally in infrastructure quality – down from 5h place in 2002.”

The New York Post reported that despite having the very answer right in front of him, Biden still fibbed, saying America ranked 85th in the world in infrastructure, before correcting himself. Numbers are hard, and the infrastructure slip-up wasn’t quite as bad as when he said he got to the Senate “120 years ago.”

“In the early stages of the 62-minute presser, in which Biden fielded 10 questions, the president appeared to repeatedly lose his train of thought, forgetting questions and asking reporters if they wanted him to give detailed answers,” most of which were responses “aided by notes he kept inside a three-ring binder,” writes the Post.

Oddly the press conference ended abruptly when he stated, “But folks. I’m going” then walked out without waiting for a follow-up question.