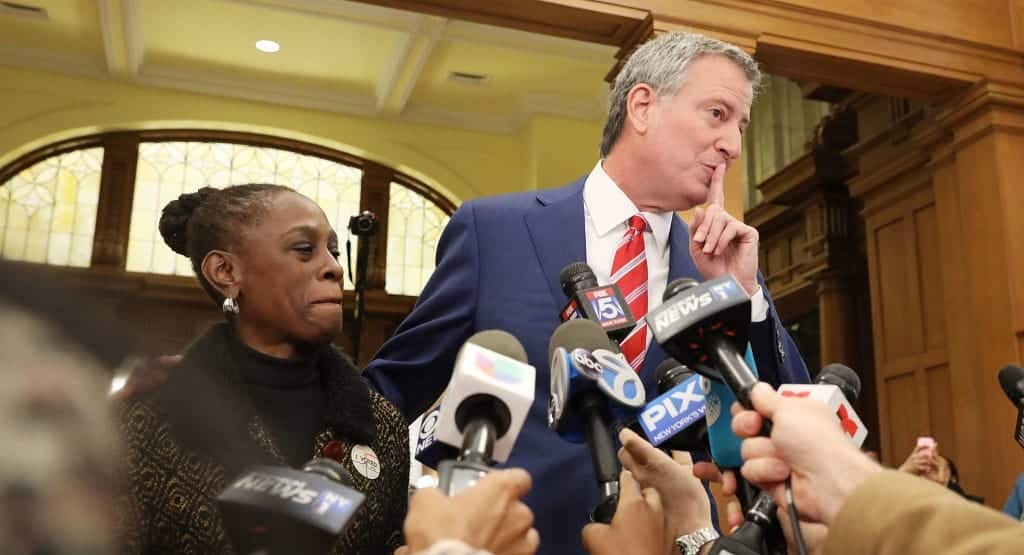 [otw_shortcode_dropcap label=”N” font=”Ultra” background_color_class=”otw-no-background” size=”large” border_color_class=”otw-no-border-color”][/otw_shortcode_dropcap]ew York is amongst the hardest hit cities as a result of the coronavirus pandemic. Additionally, the city has seen nearly two months of rioting, looting, theft, and spikes in crime and violence from the hijacked Black Lives Matter movement. As the entire city suffers in the wake of the violence and economic ruins the pandemic has created, Mayor Bill de Blasio’s wife has been called a “disgrace” and rightly so.

Chirlane McCray, de Blasio’s unelected wife, has a staff of 14 people, costing the city a horrendous $2 million annually. Daily Mail UK reports “While crime soars amid NYPD budget cuts, trash is left to pile up on the streets and 22,000 city workers face job losses” McCray’s getting filmed baking cookies by her videographer. Her $70,000 videographer.

McCray reportedly is contemplating a run for Brooklyn borough president, and currently has eight full-time staff who “cost the city a combined $1.1 million in annual salaries, according to her office” reports Daily Mail. Additional sources at the Mayor’s office confirmed she has at least another six staff not on the official payroll roster, “taking her total workforce to 14 with a hefty price tag of $2 million.”

McCray’s office said much of the hiring of her staff occurred or was already in the pipeline before the pandemic hit. However, Daily Mail reports the “senior adviser Dabash Negash was recruited in April – at the height of the pandemic and just one week after de Blasio announced a hiring freeze to help close a $7.4 billion deficit caused by the pandemic.” Negash makes $150,000-a-year salary, a staff speechwriter makes $117,000-a-year and “hidden within the wider office of the mayor, according to The City – include a $143,000-a-year public relations director and a special assistant from the mayor’s office who makes $115,000.”

De Blasio has already cut $1 billion from the NYPD budget, right smack in the middle of a surge in crime. Budget cuts have also been made to essential services “leaving the city’s streets and parks – not long ago a hive of urban activity – dirty and overflowing with rubbish” and human excrement. But hey, if you’re feeling down, just go watch Chirlane McCray guide you along on how to bake her scrumptious ginger snaps.