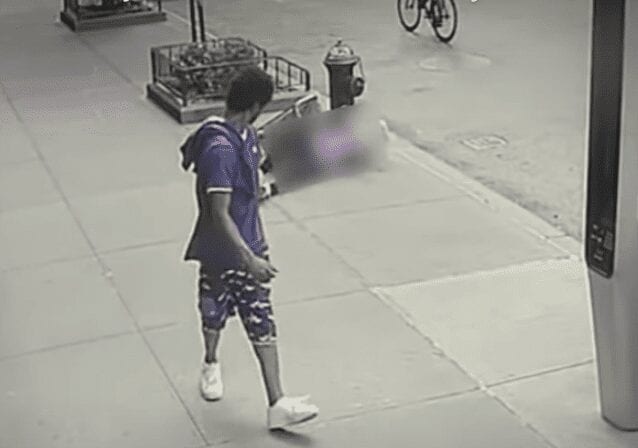 Only in New York City where the Democratic mayor and governor care more about criminals than its citizens will you get this story. A video went viral of a young man visibly and violently shoving a 92-year-old woman as he walked past her in Gramercy Park.

News reports first aired the video Monday night asking for help identifying the young man who was wanted for assault. It didn’t take long for this thug to be identified, and by Tuesday morning police had the 31-year-old in custody thanks to an anonymous tip.

Police sources said cops immediately recognized Rashid Brimmage because to say he has had dozens of run-ins with law enforcement is an understatement. Brimmage, at only 31-years-old, is a registered sex offender who has had a whopping 101 arrests. That averages over 3 arrests per year his entire life since birth. Police sources say his offenses include assault, harassment, resisting arrest, and persistent sexual abuse. He is already scheduled to be in court in July for arrests from earlier this year.

New York’s local CBS affiliate spoke to the victim about her assault. “I can’t believe that someone would do this.” The CBS reporter showed the victim the video of the attack which she had not previously seen. “Oh, he did look back. He did look back to see me fall on the floor, that rat!”

The victim, fortunately, is expected to recover quickly but suffered injuries when the push caused her to hit her head on a fire hydrant as she fell to the ground. She was sent to Mount Sinai Beth Israel hospital for her injuries. “He hit me on the left – ow – that hurts to touch it,” said the victim, who did not want to release her name, as she touched her head. “My arm was all bloody. This man did nothing except change my life and almost kill me” added the victim.

“With my visor on and my face mask, so he barely saw who I was. He just saw an elderly lady walking slowly and he decided I’m perfect for a victim” she said. Discussing how he changed her life, she added, “I’m not going to walk on the street alone right now, absolutely not.”