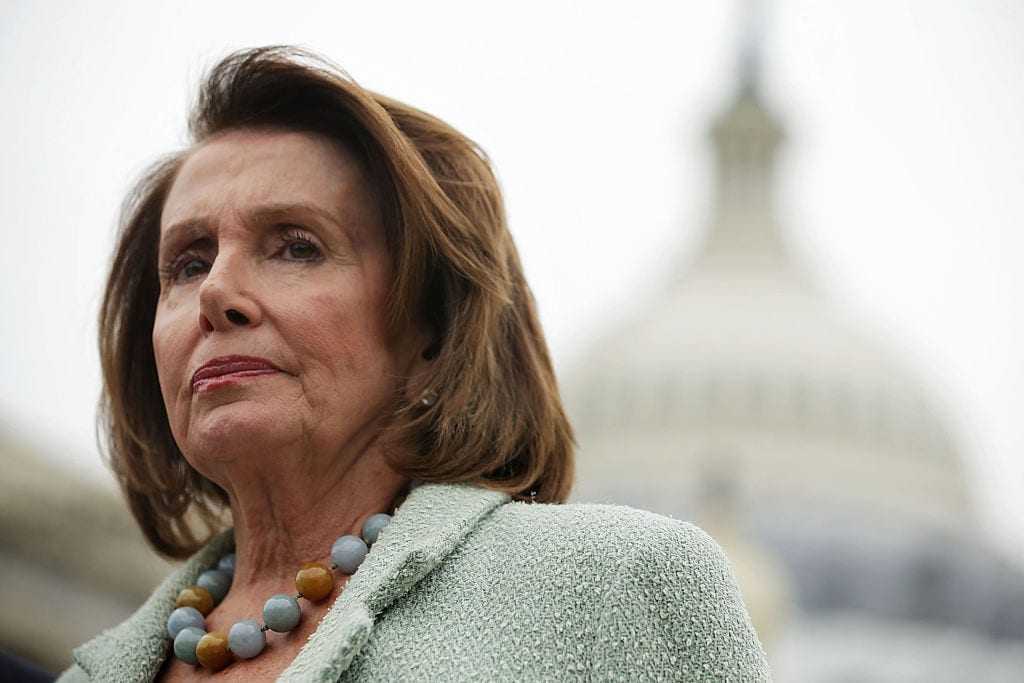 Dripping with derision, House Speaker Nancy Pelosi exulted that President Trump has “been impeached forever.”  “They can never erase that,” she intoned.  If Pelosi had a football nearby, she would have spiked it.

Her celebratory remark crystallized what the impeachment of Donald Trump is all about.  Pelosi doesn’t care about facts, evidence or what constitutes an impeachable offense under the Constitution.  She cares only about bludgeoning the president for the electoral harm it might cause him.

This has been Pelosi’s intent all along.  Impeachment was her political cudgel.  She crowed about it like a pro wrestler who body slams an opponent and then celebrates by prancing around the ring.  It was all staged, of course.

No one should be fooled by Pelosi’s shameless antics.  She has wanted to impeach Trump since he took office.  She admitted it during a televised forum last month.  It was a moment of uncommon candor for a speaker who routinely traffics in duplicity.

Pelosi bears the responsibility… and the blame.

At the same venue, she also repeated the canard she’s been peddling for months.  “We don’t take any glee in this at all.  It is heartbreaking.”  Right.  And don’t forget, she prays for the president.  She seems obsessed with reminding us how “prayerful” she is.

Pelosi is the master of insincerity.  On the eve of the House vote to impeach, she insisted that “politics is not even a consideration in this.”  Really?  Then why did she confess that she’s been yearning for impeachment since Trump moved into 1600 Pennsylvania Avenue?  Does anyone believe that whopper?

Negative Nancy: Pelosi in Hot Water After She Discounts Anti-Regime Protests in Iran

Once she set the charade in motion, Pelosi insisted that impeaching Trump was a matter of “urgency.”  After rushing it through the house with spurious evidence, she then sat on the impeachment articles for the better part of a month and refused to transmit them to the Senate for an impeachment trial.  “Urgency” was just another convenient lie.

Pelosi’s gambit to extort from the Senate her approval of the trial procedures was a spectacular blunder.  Senate Majority Leader Mitch McConnell refused to capitulate, and the speaker eventually retreated.  This hasn’t stopped the media from fawning all over Pelosi, featuring her mug on the cover of Time magazine, and extolling her as a brilliant strategist and tactician.

In an interview with CBS, the speaker inflated hyperbole to a new level when she claimed that “what the president did was so much worse than even what Richard Nixon did.”  It was such a ludicrous comparison that even the reporter seemed shocked into silence.  Nixon committed crimes and then sedulously covered them up.  Pelosi’s articles of impeachment allege no crimes at all.  Previously unsupported allegations of bribery and extortion were abandoned by the House.

GREGG JARRETT NEWSLETTER: Sign up today and have Gregg’s articles sent to your inbox for free!

In a different interview, Pelosi told the Washington Post that the impeachment of President Bill Clinton was “unnecessary.”  She seems to have forgotten that Clinton stood accused of 11 felony offenses by an independent counsel.  Trump is accused of none.  Yet, his impeachment is somehow necessary under the new and frivolous Pelosi standard.

The old Pelosi standard was the correct one.  In March of 2019, she stated with confidence, “Impeachment is so divisive to the country that unless there’s something so compelling and overwhelming and bipartisan, I don’t think we should go down that path, because it divides the country.”

Since then, Pelosi has either suffered an acute case of amnesia or she succumbed to pressure from the liberal wing of her caucus.  Either way, the speaker managed to divide the country in exactly the way she promised she would not.  She did it without “compelling and overwhelming” evidence but based on witnesses who offered no more than speculation and opinion derived from multiple hearsay.

Constitutional law professor Jonathan Turley described it to the House Judiciary Committee as “not just woefully inadequate, but in some respects, dangerous, as the basis for the impeachment of an American president.”

As the Senate hurtles toward an impeachment trial that will likely conclude with an acquittal, Americans should remember that it was Nancy Pelosi who set this national nightmare in motion.  It is an abuse of power-driven by arrogance and for political gain.

Pelosi bears the responsibility… and the blame.

In this article:impeachment, Nancy Pelosi