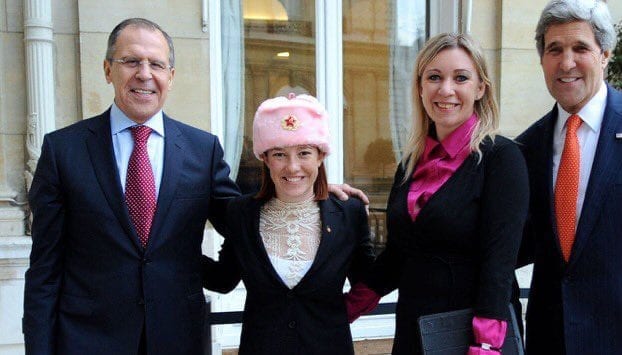 And, a photo has resurfaced of Biden’s press secretary wearing it loud and proud.

Jen Psaki, who was named to serve as the White House press secretary for the media’s president-elect, is facing scrutiny over the photo of her boasting a pink hat that displays the communist logo.

Psaki, who served in President Obama’s State Department, was given the pink shapka, the proper name for a Russian fur hat, by her then-counterpart, spokesperson Maria Zakharova in Russia. Also in the photo is John Kerry, who has been appointed to serve as Biden’s “climate czar,” Zakharova and Russian ambassador Sergey Lavrov.

The hammer and sickle is not only a widespread symbol of communism, but was also featured on the flag of the former Soviet Union, which has become a symbol for brutal economic and political turmoil that occurs under communist regimes.