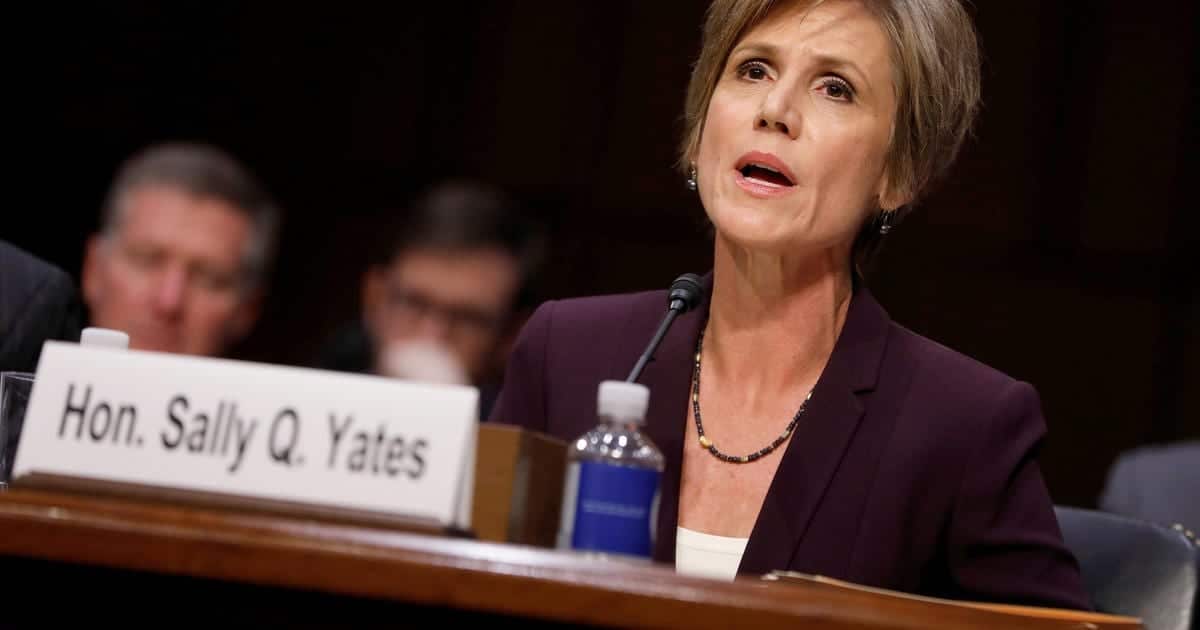 She readily agreed that Comey went “rogue” in his unauthorized pursuit of former national security adviser Michael Flynn.  But that, of course, was stating the obvious.  It was too easy.  Comey managed to turn himself into a human piñata when he engaged in blatant acts of corruption.

Like Comey, Yates was a model of prevarication and insincerity on nearly all other matters.  She minimized her own negligence and incompetence while blaming everyone else.

Some of her testimony was factually wrong and demonstrably so.

Instead of owning up to her own mistakes (or malevolence), Yates doubled-down by smearing people associated with the 2016 Trump presidential campaign.

Unbelievably, she accused George Papadopoulos of being “connected to Russian intelligence.” There is no evidence of that.

Back in 2016, the one-time campaign foreign policy adviser was fed a rumor that Russian intelligence had stolen Hillary Clinton’s emails. Only in the world of make-believe does that transform Papadopoulos into a Russian toady.

In a moment of uncommon candor, Yates said she “regrets” that the FISA court was deceived (defrauded would be more accurate) by the warrant applications she signed twice to spy on Trump campaign associate, Carter Page. Yet, she didn’t have the courage to apologize to him for violating his constitutional rights and ruining his life.

To hear Yates tell it, she was the victim of all the FBI’s lies and malfeasance, not Page. Instead of questioning the legitimacy of the phony anti-Trump dossier that she used to gain the surveillance warrants on Page, she simply accepted it as verified information based on the representation of others at the FBI and her own Justice Department.

It was the old blame-game –a traditional two-step in Washington, D.C.

Did Yates ask any probing questions? Apparently not. Her utter lack of curiosity was beyond inept; it was disgraceful.  She played a pivotal role in perpetuating the collusion narrative but lifted not a finger to investigate the truth.

For instance, did Yates ask where the dossier came from? No, not in any meaningful way.

Did she demand to know who paid for it? Hardly.

If she had, she would have learned that it was all funded by the Hillary Clinton campaign and the Democratic National Committee. Any reasonable person would have dismissed it as a collection of provable fabrications conjured up from the rich imaginations of Trump’s political opponents.

Declassified documents recently made public show that the FBI debunked the dossier a mere four days after Trump was inaugurated. The primary source for the information, Igor Danchenko, advised Comey’s FBI that it was nothing more than multiple hearsay and unreliable fables gathered from “random associates” and his drinking buddies.

If Yates had done her job conscientiously, she would have known this and tossed the dossier in the nearest garbage can.

On Wednesday, Yates still refused to admit that the dossier was “junk.” She admitted that all the errors and omissions identified by the DOJ’s Inspector General were “unacceptable.”

Yet, she was the one who accepted them without question. So much for diligence or responsible leadership.

The most stunning moment during Wednesday’s hearing occurred when Yates asserted that Flynn was not truthful with the FBI when he was questioned about his conversations with Russian Ambassador Sergey Kislyak. That was a lightning bolt of myth and mirth.

Did Yates ever speak with the agents, Peter Strzok and Joe Pientka, who interviewed Flynn? Did she even bother to read their report?

A summary of their conclusions in an FBI memo declares the following: “Strzok and (redacted FBI agent) both had the impression at the time that Flynn was not lying or did not think he was lying.” The two agents wrote that Flynn “did not give any indicators of deception.”

Yates, who was not present when Flynn was interviewed, now claims that Flynn lied –“no doubt” in her mind, she said. The two agents who actually conducted the interview confirmed that he did not. Yet, Yates somehow knows better?

Like Alice in Wonderland, Yates embraces a contorted view of reality. She refused to concede obvious truths, diminishing her own credibility. For example, secret government recordings of Papadopoulos’ conversations with an undercover informant do not constitute “surveillance” in the twisted world inhabited by Yates.

She also insisted that wiretaps on Page did not qualify as surveillance of the Trump campaign, since Page was a “former” adviser.

This was ludicrous since the warrant Yates obtained allowed the FBI to access communications retroactively into the campaign.  Yates was counting on the senators not knowing that.  They did not disappoint.

The most laughable canard peddled by Yates came as she refused to admit any bias on the part of FBI agents. Really?

How about the agent who fraudulently altered an FBI document so as to hide exculpatory evidence while incriminating Page in one of the warrant applications signed by Yates?

What about all the profanity-laced tirades exchanged by Strzok and his lover Lisa Page directed at the very man they were investigating, Donald Trump?

No bias there, claimed Yates.

No serious person can view Yates as credible.  She was always a hyper-partisan –a holdover from the Obama administration.

During her testimony on Wednesday, she wore her bias on her sleeve: “I don’t respect the manner in which he (Trump) has carried out the presidency,” she offered.

Some context might have been helpful. Yates was fired by Trump soon after he took office for her insubordinate refusal to carry out a presidential directive.

But from the outset of his administration, her overarching desire was to sabotage Trump.  It was Yates who marched over to the White House and suggested that Flynn be fired over a purported lie that was no lie at all.

She warned White House Counsel Don McGahn that Flynn could be vulnerable to blackmail by Russia.

This, of course, was a nonsensical scenario because FBI agents had determined that Flynn was telling the truth.  In what way could the Russians use the truth as blackmail?

Yates trashed Comey for going “rogue.”  But the record is clear — so did Yates. Both are equally unprincipled and unscrupulous.

Their mutual goal was to wreak havoc on the incoming president and generate a public scandal that would damage Trump.

Sadly for the nation and the institution of the presidency, they managed to accomplish it.