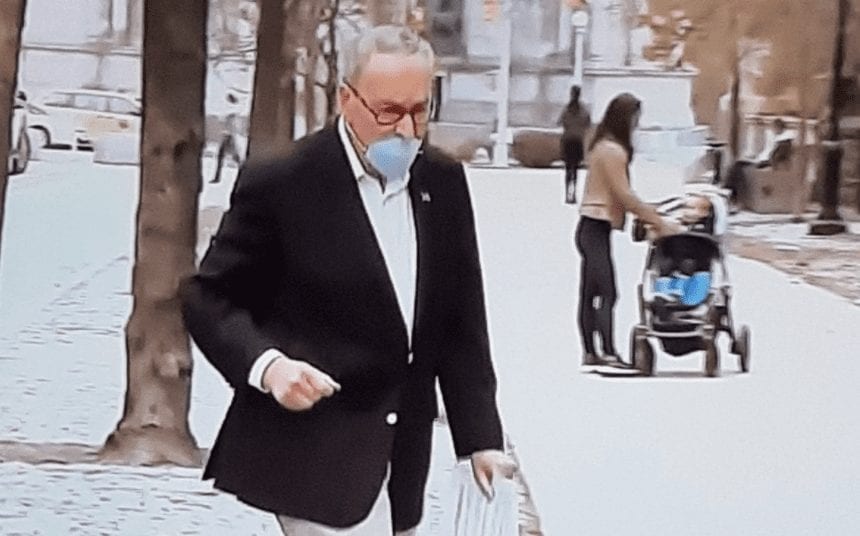 [otw_shortcode_dropcap label=”D” font=”Ultra” background_color_class=”otw-no-background” size=”large” border_color_class=”otw-no-border-color”][/otw_shortcode_dropcap]emocratic Senator Chuck Schumer of New York proudly announced over the weekend that he is a stand-up citizen who is listening to the Center For Disease recommendations and has begun wearing a face mask when going outside.  Schumer told CNN “I am wearing – yesterday for the first time, given the recommendations of the experts, I wore a mask. I didn’t enjoy it, but you have to do it. One of the big problems here we’ve had from the beginning, we have to listen to the experts, the medical experts.”

Just one problem; the experts would be sorely disappointed in Chuck. Schumer wore the mask, but how he wore and handled it made the mask itself completely ineffective. He wore the mask so that it only covered his mouth, leaving his nostrils, you know, the things you breathe potential virus-filled air through, completely exposed. It gets worse. He then used his bare hand and pulled off the mask not by the straps, but from the protective front part pulling it off his face, essentially touching his nose and mouth to do so. Democrats are the epitome of ‘do as I say, not as I do’ but in this case, Schumer was attempting to be a mask-wearing role model. This is why we can’t have nice things.

That mask position is absolutely useless. Just like the space he takes up in the Senate.

Fortunately, Schumer’s mask-wearing fiasco did not go unnoticed and became the butt of jokes on the internet. One twitter user commented “that mask position is absolutely useless. Just like the space he takes up in the Senate.”

The video of him wearing the mask ineffectively right before a press conference went viral. Ironically, as Schumer spoke at the podium about the importance of wearing masks, a chyron reads on screen: “COVID-19 FIRST RESPONDERS NEED PPE” (personal protective equipment).

Let’s pray they have a better role model to show them how to wear them correctly.