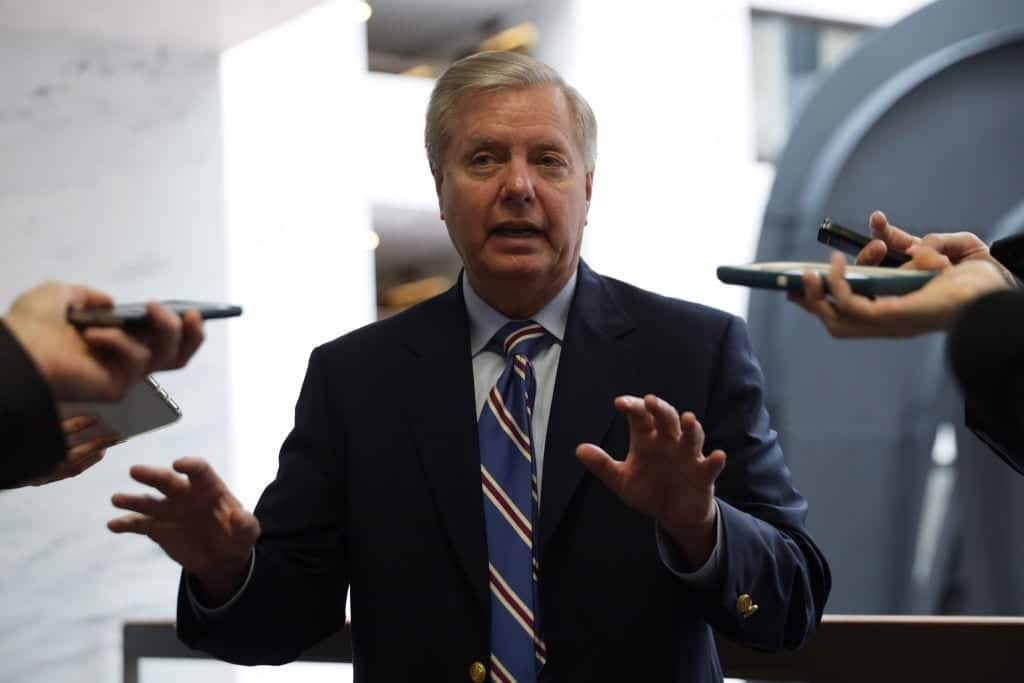 [otw_shortcode_dropcap label=”S” font=”Ultra” background_color_class=”otw-no-background” size=”large” border_color_class=”otw-no-border-color”][/otw_shortcode_dropcap]enate Judiciary Committee Chairman Lindsey Graham (R-SC) has been front and center in asking for documents relating to the Russia probe to be released. In March of 2019, Senator Graham told Fox News host Sean Hannity that the public deserves an answer as to whether or not the Russian investigation against Trump “was an insurance policy in case he did win” and he would seek the answers.

One year later and the more Senator Graham has learned, the more he believes the public should be made aware of what transpired. Now we, the public, understand why Graham was fighting so hard. In the last 24-hours, Senator Graham released a 90-page transcript between George Papadopoulos and the FBI’s confidential human source (CHS) from October 23, 2016.

CBS News’ Catherine Herridge first reported on the matter saying the transcript “turned up no evidence of coordination between the campaign and Russia.” The lightly redacted transcript, formerly classified, was documented in the Justice Department Inspector General Michael Horowitz report regarding the FBI’s surveillance of Carter Page, Trump’s former campaign aide.

Horowitz’s report stated, “Papadopoulos did not say much about Russia during the first conversation with Source 3, other than to mention a ‘friend Sergey…[who] lives in Brooklyn,’ and invite Source 3 to travel with Papadopoulos to Russia in the summertime.” Does any of that scream Russian interference with a United States Presidential election? No, no it does not.

Herridge writes of the probe:

Papadopoulos is a key figure in the FBI Russia probe. Horowitz found that the bureau opened the case after intelligence received from a friendly foreign government that Papadopoulos ‘suggested the Trump team had received some kind of suggestion from Russia that it could assist this process with the anonymous release of information during the campaign that would be damaging to Mrs. Clinton…

An additional transcript of a Papadopoulos conversation with an FBI confidential source released earlier this month shows Papadopoulos denied any involvement of the Trump campaign with the hacking of the Democratic National Committee’s email system, calling just the idea of it “illegal.” Yet again, zero proof of collusion. The FBI’s defense, also noted in the Horowitz report was that the Case Agent said, “the Crossfire Hurricane team’s assessment was that the Papadopoulos denial was a rehearsed response and that he did not view the information as particularly germane to the investigation of Carter Page.”

“Crossfire Hurricane” is what the FBI Russia team was named, who also got a surveillance warrant for Carter Page “to investigate alleged coordination between the Trump team and Moscow.” With the Senate Judiciary Committee’s release of declassified documents relating to the “investigation” of the Trump campaign, a website was also set up. The chairman of the panel, Senator Lindsey Graham, created the website as part of his ongoing investigation and has published many of the declassified materials on the site.

“I’m committed to being as transparent as possible about the circumstances surrounding FISA abuse. The goal is to make sure it never happens again” said Senator Graham. DOJ Inspector General Michael Horowitz’s report “criticized the Justice Department and the FBI for at least 17 ‘significant errors and omission’ related to the FISA warrants against Page and for the bureau’s reliance on British ex-spy Christopher Steele’s salacious and unverified dossier” reported the Washington Examiner.

Thank you, Senator Graham, for releasing these documents to provide transparency to the public so they can see for themselves just how outrageous the probe was. Of the 35-page, 171-page and 90-page transcripts of conversations Papadopoulos had with FBI sources, it was revealed: “the FBI failed to inform the FISA court about Papadopoulos repeatedly denying the Trump campaign had anything to do with the hacking of the DNC and the dissemination of stolen email to WikiLeaks which published them during the 2016 campaign” reported The Washington Examiner.

What did Papadopoulos say? In the 90-page transcript released by Graham on Monday, the reader gets to listen to three men mostly talk about hot women. Papadopoulos, the confidential human source (CHS), and a third male, First Name Known Omar (FNKO) grab a bite to eat and some drinks. The men talk about cars, their girlfriends, their friends’ former girlfriends, their type of women, and all the things you would never expect to be part of an FBI investigation which was then used in an attempt to show the President of the United States colluded with the Russian government in an election. It’s just outrageously far-fetched.

As mentioned at the beginning of the article, the only discussions of anything remotely political were that Papadopoulos formerly worked for Ben Carson’s campaign, then worked for Trump, and made great contacts. He did mention that he had once arranged for a meeting with President Trump and the Egyptian President el-Sisi and that he thought Edward Snowden “did a good job.” References to Russia were even fewer; he had a “friend Sergey” in Brooklyn, and he wanted to visit Russia in the summertime. Oh yeah, and they also discussed what colognes they like, which ethnicities of women they have dated, and that they’d “jump” their waitress.

It definitely sounds like some top-level national security issues. Thank goodness for the FBI’s meticulous, covert operations at the taxpayer’s expense.